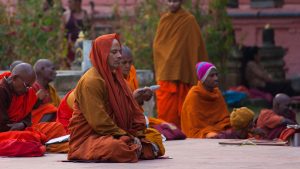 ‘Mindfulness’ has become a household word, standing for inner peace, wellbeing, and cutting-edge healthcare. For four years, I researched how it’s become such a compelling force in Western culture.

By Dr. Matt Drage / 02.22.2018
Researcher in Mindfulness and Meditation as Biomedical Inrtervention

In the chair opposite me sat JP, a senior teacher from one of London’s many religious Buddhist organisations. He was also a friend of several years; JP and I practiced the same type of Buddhism. He was grinning at me, eyes fierce: ironic, playful, but genuinely angry.

As he finished speaking, I had nervously bitten off a large piece of the chocolate that he had given me when I arrived, bought for him from a trendy East London boutique by one of his many disciples. I gulped it down with my herbal tea; the smell of incense – burning on the small shrine in the room’s corner – was overwhelmingly sweet. 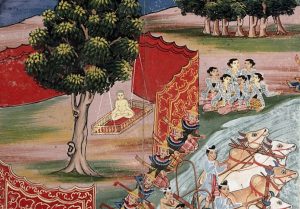 It’s never too early to begin meditating, as this depiction of a baby Bodhisatta mediating under a tree shows. / Wellcome Collection, Creative Commons

Around two-thirds of my interviewees had long-standing relationships with Buddhism. Many of them had even received ordination and been given Buddhist names – names taken from scriptural languages of Buddhism, such as Pali or Sanskrit.

And yet, when they became mindfulness teachers they decided not to foreground their Buddhist commitments and identities, let alone identify themselves by polysyllabic Sanskrit names. This had especially incensed JP: in neglecting to use their Buddhist names, they were – in his view – betraying the solemn promise of loyalty they had made at ordination.

I had been speaking to JP about my recent experiences of the British mindfulness community. It was the summer of 2015, and I had just spent almost a year immersed in the growing network of people using the Buddhist-meditation-inspired practice of mindfulness meditation as the basis for a diverse range of therapeutic mental health and wellbeing interventions.

Mindfulness is a kind of mental training, based on the practice of deliberately bringing your attention to bear on physical sensations, emotions and thoughts. Using these techniques – the proponents of mindfulness claim – it is possible to cultivate a kinder, more accepting relationship with yourself and the world around you. A growing body of evidence shows that applying these ideas and exercises can offer relief from a range of symptoms, from stress and poor concentration to psoriasis and IBS.

My aim for the PhD research I carried out from 2013 to 2017 was to find out how the traditional Buddhist practice of mindfulness had gained legitimacy in the secular world of science and medicine.

JP’s outrage had been sparked by one of my preliminary research findings: many of the key players within the British mindfulness movement were downplaying their Buddhist ties. 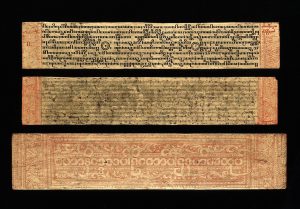 Teachers I spoke to were largely unabashed about how they presented themselves. They were keen to use the growing public acceptance of mindfulness to bring the essence of the Buddha’s teachings to new audiences. But to say this out loud might be off-putting. One senior British mindfulness teacher even said she believed it was “irresponsible” for mindfulness professionals to use their Buddhist names in secular contexts.

Most teachers presented mindfulness along the lines set out by a 2015 parliamentary report on the potential uses of the practice for British society: while mindfulness had its origins in Buddhism, it had been “freed from any religious or dogmatic content”. 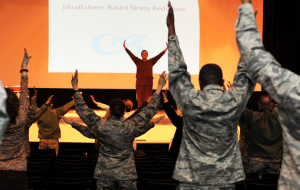 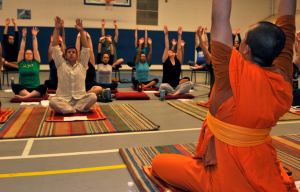 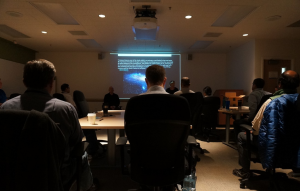 My training in the history of science and medicine told me that things were not that simple. When you move a technique from one place to another, you also take a huge, complicated web of tacit assumptions and practices with you. Put simply, if someone spent years trying to practice the Buddha’s teachings and were now working hard to bring them to others, wouldn’t that make them a Buddhist?

Although I didn’t feel as strongly about it as JP did, it seemed to me too that something strange was going on. It was hard not to see the idea of mindfulness being “freed” from its religious context as a ruse.

Responses from my interviewees were variations on a theme. Buddhism doesn’t have exclusive rights of ownership over mindfulness. Mindfulness is in lots of different religions – or, at least, something very like it. Mindfulness is bigger than Buddhism, even if it came (partly) from Buddhism. Anyway, the label ‘Buddhism’ is a modern invention used by Westerners obsessed with their identities.

I remained sceptical. These ideas smacked of post-hoc justification. The fact was, surely, that if they told people they were doing Buddhism, nobody would have been interested in mindfulness. 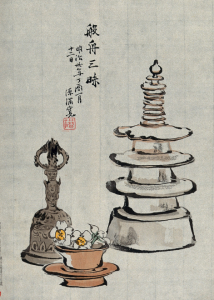 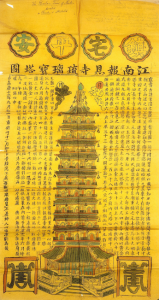 [LEFT]: These items are used to help Buddhists to meditate. The bell symbolises Buddha’s voice and makes the sound of Dharma. In meditation, the sound of the bell helps to focus attention. / Wellcome Collection, Creative Commons
[RIGHT]: This picture shows the porcelain pagoda (or stupa) of the Pao-en-szu of Nanking. In Chinese, the pagoda was called Bao’ensi, the ‘Temple of Gratitude’. The Europeans called it the ‘Porcelain Tower’ and considered it one of the wonders of the world. A stupa is a mound-like or hemispherical structure containing relics that is used as a place of meditation. / Wellcome Collection, Creative Commons 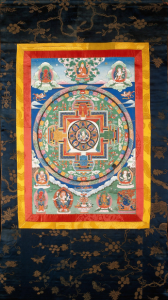 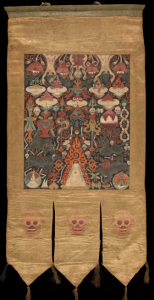 [LEFT]: This mandala shows the eight-handed goddess Usnisavijaya. Mandalas are used to focus attention, for establishing a sacred space, and as an aid to meditation and trance induction. / Wellcome Collection, Creative Commons
[RIGHT]: On this banner is the four-faced turban-clad Brahma. He is a protector associated with the meditative experiences of the ‘world-system of form’ (gzugs-kyi khams), and is acknowledged as the head of a group known as the ‘liberating’ protectors (sgrol-‘ging). Though he is a Hindu god, he and Indra have been incorporated in the Buddhist pantheon. / Wellcome Collection, Creative Commons

The Origins of Mindfulness

Then I dug deeper into the history of the contemporary mindfulness movement. Its earliest proponents were children of the 1960s with a deep mistrust of traditional authority – especially religion – and a desire for radical psychological and spiritual experimentation. This was where the idea emerged that mindfulness could be practiced independently from religion.

In the summer of 2015, I travelled to America to interview those who had worked closely with the acknowledged founder of mindfulness as we know it: Jon Kabat-Zinn.

One afternoon, I met Peggy Gillespie in a leafy part of Amherst, Massachusetts. An enormous, friendly dog met me at the door, followed by Gillespie. She was a robust, healthy-looking woman in late middle age. Her smile was huge and warm; her hair a mass of curls, her clothes comfy and well-worn. Her garden, like her dog, had a friendly but untamed feel to it.

Gillespie had worked with Kabat-Zinn on mindfulness from 1979, almost from the beginning. They taught mindfulness to outpatients at the University of Massachusetts Medical Center; patients suffering from a wide variety of hard-to-treat conditions like chronic pain, hypertension, and gastrointestinal syndromes.

Gillespie, an experienced meditator and palliative care worker, was Kabat-Zinn’s second-in-command from 1979 to 1983. She published the first book on mindfulness: her 1986 self-help monograph, ‘Less Stress In 30 Days’, based closely on their work together. She walked me over to her swimming pool, and to the sounds of water lapping and her dog’s panting, recounted how she had first got involved with mindfulness. 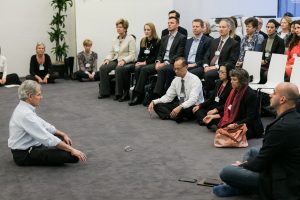 “I was very agnostic, anti-religion. I was brought up with no religion and I hated organised religion and thought it lead to so many problems and divisions.” But then, in the late 1960s, she tried the hallucinogenic drugs LSD and magic mushrooms for the first time. “They just were amazing. It opened me!”

Gillespie’s experiences left her wanting more, and she began to meditate, practicing with the American ‘Insight’ tradition – a tradition that agreed with her view of Buddhism: “It’s not a religion to me; it’s a philosophy and psychology and a great teacher [the Buddha] who was a human being. I still don’t call myself a Buddhist.”

Her story was typical among the first generation of mindfulness teachers. Not all had been introduced via psychedelics – though many had. But nearly everyone agreed that although religion was objectionable in many ways, religious practitioners through the ages had been able to access an ‘experience’ that was important and healing.

From William James to Jon Kabat-Zinn 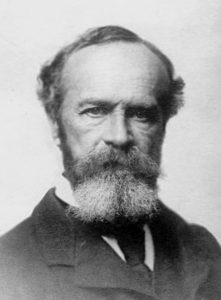 The famous psychologist and philosopher, William James, helped shape this view. In the early 20th century, his book ‘Varieties of Religious Experience’ posited that although religions differed, they pointed to the same experience.

The book was hugely influential in 1960s counterculture. For figures such as Aldous Huxley, New Age icon Ram Dass and their followers, psychedelic drugs, meditation and religious experience were all gateways to the same ultimate truth. Kabat-Zinn, part of this scene too, called this universal, experiential truth “Dharma” – a Sanskrit word also used to refer to the Buddha’s teachings.

Our conversation ended after an hour and a half: I had to meet another interviewee in a nearby restaurant. Gillespie, who had moved on from her work with Kabat-Zinn to teaching more explicitly Buddhist meditation, evidently saw how much our conversation had affected me. 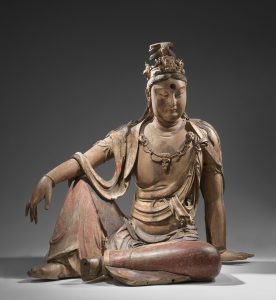 According to legend, Buddhist deity Guanyin was once found sitting in this position, meditating on the reflection of the moon in water, a symbol of illusion and transience in Buddhism. His pose and face embody inner peace and concentration. / Rijksmuseum, Creative Commons

I hesitated, suddenly embarrassed. In my mind’s eye, I saw JP’s disapproving frown. Either you’re a Buddhist, or you aren’t.

We said goodbye a little awkwardly. As I drove away, I felt confused. My skin tingled and my heart sang. I loved and believed in what she told me. At the same time, I knew we came from different worlds.

Gillespie believed there was a truth to be found both within and beyond religion. This was a truth that mindfulness captured. The longer I spent in the mindfulness world, the clearer it became that it was a faith of sorts, and one quite different from what I knew as Buddhism. It was a faith not in religious hierarchies, or creeds, or gods, but in the ideal of ‘experience’. Since everyone has experience, it can’t be owned by a religion; it belongs to all.

JP’s outrage – and my disquiet – were perhaps misplaced. As my research progressed, I came to see that the debate over the secular status of mindfulness had less to do with Buddhism as such, and more to do with a conflict of worldviews whose origins were much closer to home. There is a very long Western tradition claiming beneath the external trappings of religion that there is a fundamental truth to be found – a truth of experience. William James was part of that tradition; so were Gillespie and Kabat-Zinn.

Whether the religion of no religion really counts as a religious context to mindfulness is still an open question. Maybe it isn’t even quite the right question to ask. But it seems to point towards important issues – issues that many of us will need to face as mindfulness takes an ever more prominent place in public life.