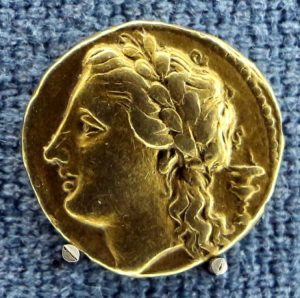 Agathocles of Syracuse (c. 361 – 289 BCE) ruled as tyrant of the Sicilian city for over 25 years. Ambitious, unprincipled, and seeing himself as a new Alexander, he famously attacked Carthage in a three-year campaign and made conquests in southern Italy, but ultimately his quest for a lasting Sicilian-Italian empire failed. On Agathocles’ death, his lack of a recognised successor caused chaos at Syracuse and his memory was officially obliterated with a damnatio memoriae. His greatest legacy was perhaps that he had shown Carthage could be defeated in Africa, a lesson the Romans would later use to devastating effect in the Punic Wars.

Agathocles was born at Thermae in Sicily in 361 or 360 BCE, and his father was Carcinus, originally from Rhegium. Carcinus was made a Syracusan citizen c. 343 BCE and became the owner of a large and successful pottery workshop. In his youth Agathocles saw military service and displayed political ambitions. So much so, that the oligarchy government of Syracuse exiled him c. 330 BCE.

Establishing himself in southern Italy, Agathocles operated as a mercenary in Croton and Tarentum. Back on Sicily Syracuse was besieging Rhegium when Agathocles came to the aid of the city. His victory brought the downfall of the ruling oligarchy of 600 at Syracuse. He returned to the city but was again exiled when the oligarchs retook power. Undeterred, Agathocles raised his own army from neighbouring city-states, and when the oligarch’s Carthaginian ally Hamilcar switched allegiance to Agathocles in 319 BCE, he was able to declare himself strategos autokrator, or supreme general, of Syracuse. Agathocles then ruthlessly murdered or exiled the 600 oligarchs in a coup in 316 BCE. He next set about making himself popular with the ordinary citizens of the city by abolishing debts and redistributing the land. Agathocles was now the supreme ruler of Syracuse and he ambitiously claimed sovereignty over all the cities of Sicily.

To consolidate his rule, Agathocles then campaigned to crush those cities which had supported the oligarchs. These troublesome opponents included Acragas (Agrigento), Gela, and Messana. The tyrant’s ambitions were not going unnoticed by Carthage who still had territorial interests in the western half of Sicily. Indeed, Messana appealed to Carthage for aid with the result that Hamilcar once again interceded and mediated a peace treaty in 314 BCE. According to its terms, Syracuse would restrict itself to territory east of the River Halycus. Perhaps underestimating Carthage’s resolve to respond, Agathocles invaded the western side of the river. Carthage sent a force of 14,000 men to defend their interests, soundly defeated the tyrant near Gela in 311 BCE, and then marched on Syracuse. Meanwhile, the Carthaginian fleet positioned itself to blockade the city from the sea. Agathocles responded to this threat with an unexpected and wildly ambitious strategy; he left Syracuse in the hands of his brother Antander and sailed for Africa with a fleet of 60 ships. He would strike at the very heart of his opponent.

In 310 BCE Agathocles landed in Africa with up to 14,000 troops and now hoped to so unsettle the Carthaginians that they would be forced to withdraw from Sicily. To spur on his men and remind them that victory was the only route home, he burnt his ships (or less romantically, did so to save leaving behind the necessary troops to guard them). Winning his first engagement and killing his opposing commander Hanno, Agathocles marched down the Cape Bon peninsula to Carthage itself, plundering booty along the way. The Carthaginians were rattled and sacrificed 500 children to appease the gods according to the historian Diodorus. Even more seriously, internal political strife, a Libyan rebellion, and a failed coup by one Bomilcar were crippling Carthage’s ability to effectively respond to the invasion of their homeland. Agathocles did not have the means to besiege well-fortified Carthage, which could, in any case, be resupplied by sea, and so he established his base at Tunes (modern Tunis). In 309 BCE another Carthaginian army was defeated.

Meanwhile back on Sicily, Syracuse was resisting the siege thanks to its own impressive fortifications, but Acragas now formed an alliance of disgruntled city-states in order to free themselves once and for all from the threat of Syracusan hegemony. Still, two successive attacks by Carthage were rebuffed in 309 BCE, and the Carthaginian general Hamilcar was captured, tortured, and beheaded.

Agathocles was then boosted by the arrival of an army from Cyrene, his old ally and fierce rival of Carthage. The ruthless Agathocles killed their commander Ophellas and incorporated his army into his own fighting force. He then managed to take the cities of Utica and Hippacra and now controlled much of Libya. Then the balance of the war began to shift. Agathocles was forced to return to Sicily when the Carthaginian siege looked like gaining the upper hand there and Acragas began stirring up the Greek city-states again. He left a force of 20,000 men in Africa in 307 BCE under the command of his son Archagathus. Looting the countryside and taking Thugga, the Syracusans allowed Carthage to regroup and a 30,000-strong Carthaginian army, which included both cavalry and war chariots, met and crushed the Syracusan army. Agathocles briefly returned to Africa to try and salvage his invasion force, now vastly depleted and blockaded at Tunes, but he was forced to retreat back home. He had abandoned his two sons in the process, and they were murdered by their own men when they realised total defeat was imminent.

In 306 BCE the two sides agreed a peace with their territorial claims re-established, as before, either side of the Halycus River. This allowed Agathocles to declare himself king of Greek Sicily, also in 306 BCE, although Acragas remained stubbornly independent. In the same year, the tyrant married Theoxene, a step-daughter of Ptolemy I of Egypt. In another useful dynastic tie, Agathocles’ daughter Lanassa married Pyrrhus, king of Epirus, in 295 BCE.

Return to Italy and Death

Agathocles returned to his old stomping ground of southern Italy in 300 BCE, taking Bruttium. He also supported Tarentum in its war against the Lucanians and Messapians in 298-297 BCE. More success came in 295 BCE when he amassed a fleet of 200 ships and conquered Croton. He then received Corcyra (Corfu) from Pyrrhus as dowry, while alliances were also made with other sympathetic city-states. In 289 BCE he made plans to attack Carthage in Africa for a second time, but he was either poisoned or died of illness. Without a recognised successor, the government of Syracuse reverted back to the ruling elite and, such was his unpopularity at having involved Syracuse in a series of rather pointless and hugely costly wars, his memory was officially erased from the public records.