The fall of the Athenian army in Sicily during the Peloponnesian War in 413 BC as depicted in an 1893 illustration by J.G.Vogt. Wikimedia Commons 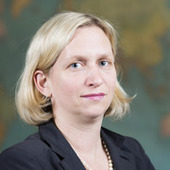 Thucydides’s History of the Peloponnesian War breaks off before the story is over. After detailing the armed conflict between the Athenians and the Spartans (and their respective allies) between 431 and 404 BCE, the eight-book text ends abruptly in the middle of a chapter as if, one day, the writer simply dropped his pen and left his desk, never to return. 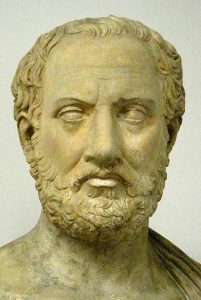 What required such urgent and final attention? And why did Thucydides never return to complete the manuscript? Whatever the answers, the book’s incompleteness adds a human touch to a work that is otherwise an accomplished and polished piece of writing.

The Peloponnesian War Thucydides recounts culminated in Sparta’s surprisingly late victory over the Athenians and ended a power dynamic that had shaped the ancient Aegean world for decades.

Everything changed in its aftermath. Both major powers came out of the war considerably weakened, opening the door for the later annexation of Greece by Philip of Macedon, his son Alexander the Great, and, finally, the Romans. 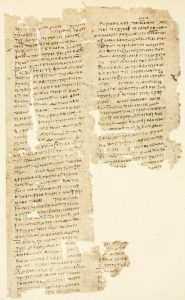 A fragment of the fourth book of the History of the Peloponnesian War. Wikimedia Commons

In Thucydides, the war found an author of meticulous standard and dedication who created a work that still resonates in the disciplines of history, international relations, and political science. His thoroughness, sharpness, and matter-of-fact analysis have led some people to believe that he, and not fellow historian Herodotus, deserves the title “father of history”.

Thucydides would have agreed. His history includes several direct and indirect attacks on his immediate predecessors, most notably on Homer and Herodotus. While never once referring to him by name, Thucydides accused Herodotus of fabulation, storytelling, and a writing style that pandered to his immediate audience.

Needless to say, Thucydides was convinced that he himself offered a far superior product. He set the bar and set it high:

And the results, by avoiding patriotic storytelling, will perhaps seem the less enjoyable for listening. Yet if they are judged useful by any who wish to look at the plain truth about both past events and those that at some future time, in accordance to human nature, will recur in similar or comparable ways, that will suffice.

As a high-ranking Athenian military commander (or “strategos”), Thucydides brought to the project firsthand experience of the war, as well as an acute understanding of the complex power politics behind events on the battlefield. His analysis of the immediate and underlying causes of the war and his insight into the considerations and motivations of those fighting it remain one of the most brilliant pieces of political history to date.

His sharp analysis of the kind of forces that stir popular sentiments and drive collective decision making still resonates in the modern world. It fulfils its author’s own – somewhat preposterous – proclamation about the nature of his work:

It is a possession for all time (“ktema eis aei”), not a competition piece to be heard for the moment, that has been composed.

Nonetheless, his programmatic prediction proved right. More than 2500 years later, Thucydides’ History still stands among the foundational texts in the classical canon due to its enduring analytical sharpness and the acuteness of his observations.

My war is bigger than yours

When Thucydides set out to compose his work, the writing of warfare was already a notable tradition launched with a bang by the legendary Homer about three centuries earlier. In his epic poem Iliad, Homer related the story of the Trojan War as an epic battle involving gods and humans alike. He was followed 300 years later by Herodotus who gave an account of the Persian Wars, similarly rich in iconic battles and larger-than-life personalities on both sides of the conflict. 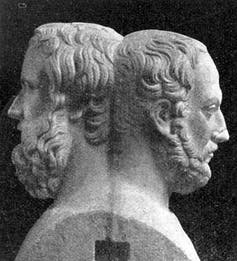 A double bust of Herodotus and Thucydides.Wikimedia Commons

With Thucydides, the writing of war took a new direction. In contrast to the wars of Homer and Herodotus, the armed conflict that concerned Thucydides was fought primarily among Greeks. It also involved events that occurred within the author’s lifetime, which introduced a contemporary dimension to the genre.

Thucydides focused on offering a strong and authoritative account of the war, its causes, and behind the scenes negotiations. To this end, he largely left out the gods and religious explanations more generally – although there is still more religion in Thucydides than one may think.

Instead, he offered a deep analysis of human factors and motivations. Although Thucydides was aware that all authors exaggerate the importance of their topic, he still felt inclined to make a case for his:

And this war – even though men always consider the war on hand the most important while they are fighting but once they have ended it are more impressed by ancient ones – will nevertheless stand out clearly as greater than the others for anyone who examines it from the facts themselves.

The reasons he gave were three-fold: the Peloponnesian War was fought between two cities at the height of their power; these powers went into conflict prepared; and most of the Greek world (and beyond) was subsequently drawn into the fighting.

The so-called “archaeology” of his work – a succession of observations laid out in the beginning – sets out his method: eyewitness accounts; the critical evaluation of sources and informants; and, finally, his own experience and insight.

What stands out throughout is the sharpness with which Thucydides reports. In contrast to Herodotus, he no longer includes alternative viewpoints and traditions but offers a strong, singular explanation of events. Yet the authorial voice Thucydides created in the History should not belie the fact that he engaged in his very own forms of make–believe.

Through the speeches, in particular, Thucydides offers evaluations of events and situations in a voice other than his own. Interspersed throughout the History, they provide a commentary on the events from the perspective of the historical actors.

A battle of words

Some modern critics decry the speeches in Thucydides’ History as the failure of an otherwise truthful and authoritative narrator. Yet Thucydides himself apparently saw no problem; there was no conflict between his aim to tell what really happened and his use of speeches, although he did find the subject important enough to warrant an explanation:

Insofar as these facts involve what the various participants said both before and during the actual conflict, recalling the exact words was difficult for me regarding speeches I heard myself and for my informants about speeches made elsewhere; in the way I thought each would have said what was especially required in the given situation, I have stated accordingly, with the closest possible fidelity on my part to the overall sense of what was actually said.

Among the speeches, the so-called “Funeral Oration” stands out. Allegedly delivered by the famous Athenian statesman and orator Pericles’ after the first year of the Peloponnesian war, the speech was intended to celebrate those who had fallen, and offers an appraisal of Athenian culture, identity, and ideology. 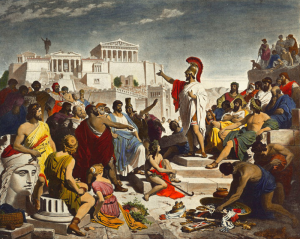 Thucydides’ Pericles makes an emphatic appeal to the very foundations of Athens’ power and supremacy. His appraisal of Athenian greatness includes references to bravery, military strength, democracy, freedom, and the rule of law, as well as to “soft” values such as the love of beauty, education and the arts.

However, a different picture of life in Athens follows this oration: Thucydides’ detailed account of the plague that broke out shortly afterwards. Thucydides, who was also afflicted, reports in detail on the plague’s impact on the human body, the city, and its people. Lawlessness, disregard for custom, egotism and a general lack of order in the face of death took hold of Athens.

The strong contrast between the high-minded “Funeral Oration” and the ravages of the plague provides a powerful insight into the principles that guide Thucydidean enquiry. This author is not afraid to point out that ideological premise and historical practice don’t always mesh. Time and again he shows that in extreme situations, it is human nature to diverge from ideals that are otherwise firmly held.

In these moments, the anthropologist and humanist in Thucydides comes to the fore. Recent scholarship has highlighted this dimension of his work. Even though the main focus in his History remains on warfare and the geo-political deliberations that inform it, there is more on human nature and culture in this work than one may think. And, more frequently than not, Thucydides extends his sharp analysis from politics and warfare to the human and cultural factors driving human history.

The tragedy of power politics

The same sharp analysis runs throughout the work. It cuts to the core of the hidden forces, motivations, and considerations at stake in various historical situations, and informs such diverse accounts as the so-called “Mytilenean Debate” and the “Melian Dialogue”.

The Mytilenean Debate revolves around whether the Athenians should revoke their decision to annihilate the entire western Ionian city of Mytilene in retaliation for a revolt. 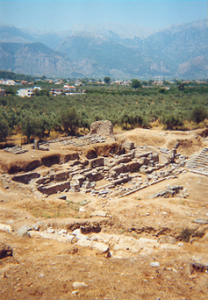 Thucydides has two main speakers set out the case. Both speakers make a series of complex arguments revolving around questions of justice, fairness, good governance, and the nature of hegemonic rule. Cleon (a General during the Peloponnesian War) argues for harsh treatment: doing otherwise would set a dangerous precedent for other allies. Diodotus (his opponent), on the other hand, takes up this point and insists that a more lenient response is the superior strategy: it would not corner those rebelling but provides them with a viable alternative that secures a future source of revenue for Athens.

Diodotus’s argument, in particular, invokes the principles and practices of these aforementioned “soft powers” successfully. As such, the Athenians choose to overturn the decision. A trireme is dispatched just in time to prevent major bloodshed.

However, a very different side of Athens emerges in the Melian Dialogue. This is the only section in the History that’s set out like a dramatic fast-paced sequence of direct speech – a dialogue like an Athenian tragedy. Importantly, this conceit allowed both the Athenians and the Melians to present their views directly and as a collective voice.

Allowing the Melians to remain neutral would set a dangerous precedent and threaten Athenian hegemony.

Over two millennia later, this line of reasoning still resonates. Particularly now, as populism reemerges, insights into the power of words to influence public sentiments and decision-making remain acutely (and painfully) up-to-date.

In a modern context, the American political theorist Robert Mearsheimer calls the dynamics of such considerations which revolve around national self-interest “the tragedy of great power politics”. In his book of the same name, he describes the constant struggle of nation states to maintain and optimise power and hegemony in order to prevent other states from dominating them.

And a tragedy it is. Both the Athenians and the Melians remain steadfast. Melos (an Aegean island inhabited by Dorians) refuses to submit. Athens ends up murdering all men of military age and selling their wives and children into slavery. 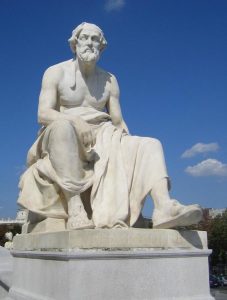 A statue of Thucydides at the Austrian Parliament Building in Vienna. Wienwiki / Walter Maderbacher, Wikimedia Commons, CC BY

It is such resonances which make the History stand out and endure. The voice of the characters within the story reverberate with the voice of Thucydides as its author.

Despite his penchant for long-winded sentences – truthfully and painstakingly rendered into English in most translations – Thucydides’ History of the Peloponnesian War has become a classic by virtue of the sharp political realism at its core.

It remains a must-read for all who want to understand how power politics manifest, and learn about its effect on the psychology of humankind, both individual and collective.