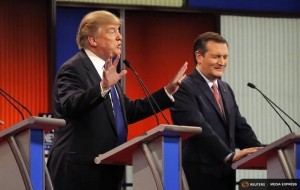 Our collective presidential political brackets are as messed up as our NCAA basketball forecasts. Voters really are peeved, but not in the way the political world predicted.

Three very common forecasts that began this cycle have been erased, even as the underlying rationale for them has held steady:

1. Brands would carry the day.

Remember that one? The idea was that the 20-year-old bumper stickers — the ones with the names Bush and Clinton on them — would be on people’s cars again as we closed on the 2016 general election.

Jeb Bush fizzled, to put it politely. Hillary Clinton remains the favorite for the Democratic nomination, but it hasn’t been a particularly happy sleigh ride, and Bernie Sanders is still needling her with his appeal to the somewhat surprising number of voters willing to consider someone else.

2. After Barack Obama’s two terms, voters would be looking for substance over spectacle, dodging the orators with thin public resumes for, say, governors with plenty of experience outside of Washington, D.C.

Kasich’s the only remaining governor, and he’s running third in what appears to be a two-man race for the nomination.

He’s the equivalent of the Cinderella team that sneaks into the final rounds of the basketball tournament — maybe without the warm and fuzzy background story about coming out of nowhere to contend.

One thing has remained true, however, even we watched our predictions sour: The disruption that has marked the Republican Party in Texas and the United States for the last decade is still blooming.

Play it back. The “Taxed Enough Already” movement — you know, the TEA Party — started in April 2009, when Americans were filing their income tax returns.

Perry, then the Texas governor, was an early adopter of that movement’s anti-government sentiments. Though he had been a statewide elected official since 1991, he harnessed voter frustrations with incumbents in his 2010 re-election campaign by turning the antipathy toward the federal government against his chief opponent, U.S. Sen. Kay Bailey Hutchison.

As he was beating Hutchison, Tea Party conservatives were overwhelming conventional Republicans and conservative Democrats in other races. By the end of the year, Perry had turned out a book, “Fed Up! Our Fight to Save America from Washington,” continuing the conversation that led into his first presidential bid the next year.

He was just one figure in the war on conventional politics. The GOP has more or less absorbed the Tea Party, so much so that it is hard to distinguish from movement conservative and social conservative elements in the party.

This year, whatever you were predicting back at the beginning, one element — the strong distaste for politics as usual — has remained constant.

The Bush/Clinton idea offered a return to the pre-Tea days. Clinton survived, but Bush did not.

Several of the governors won their jobs by appealing to the disruptive preferences of the conservative electorate and might have broken through but for the efforts of Trump and U.S. Sen. Ted Cruz. Despite their Ivy League, business and political bona fides, those two became the outliers — the outsiders — in the Republican pack.

Cruz picked up Perry’s tool bag in his 2012 race for the Senate, riding the GOP’s anti-establishment sentiment to an upset win over Lt. Gov. David Dewhurst and two others for a six-year trip to Washington. Once there, he irritated the insiders and delighted the outsiders by not playing nice with others in the U.S. Capitol.

His popularity with the dissidents rose in proportion to the ire of the establishment, fueling his current race for the presidency.

Trump’s appeal, so easy to dismiss at the beginning, isn’t all that hard to understand. He is everything Washington is not — in good ways and bad. Trump is so far outside the establishment he has all but turned Cruz into an insider who is now pining for help from the same “Washington cartel” he seeks to depose.

Even the disrupters have been disrupted. So don’t feel bad about your brackets — who could have predicted that?