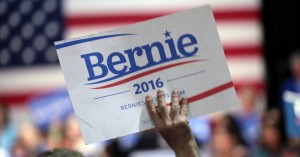 A series of primary wins last week has reinvigorated Bernie Sanders’ presidential campaign, and he has new polls, donations, and endorsements to back it up.

With Wisconsin’s primary on the horizon, Sanders on Monday welcomed the support of the state’s former Lieutenant Governor Barbara Lawton, who said she had “never before felt greater urgency in a political campaign.”

“This election gives us the opportunity to rebuild America’s middle class and restore stability at the core of our democracy,” Lawton said in her announcement. “We must to realize both economic and national security, for all. That is why I endorse Bernie Sanders for president of the United States.”

Sanders also got a boost from a new poll, out Tuesday, which shows the senator from Vermont closing the national gap with frontrunner Hillary Clinton. The NBC News/SurveyMonkey poll finds that Clinton now leads Sanders by only six points, 49 to 43 percent, down by half from her 12-point lead in the same survey just last week.

The poll was conducted online from March 21-27 and surveyed 6,521 adults, including 5,741 who say they are registered voters.

The new support comes after Sanders won a string of West Coast primaries over the weekend, in Washington, Hawaii, and Alaska, following success in Utah and Idaho last week.

On Sunday, the senator’s campaign manager Jeff Weaver called for Clinton to agree to a debate ahead of the April 19 primary in her home state of New York. Clinton rejected the demand, calling it a “stunt” by a “struggling” campaign.

However, as The Intercept pointed out on Tuesday, Clinton in 2008 was “taunting her opponent Barack Obama for not being tough enough ‘to debate anytime, anywhere.'”

In late April 2008, Clinton called for a 90 minute, “Lincoln-Douglas”-style debate with Obama. This was after the Democratic candidates had faced each other in 26 debates — far outnumbering the eight debates that Sanders and Clinton have had this election season.