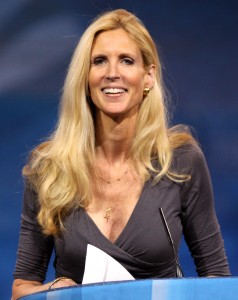 Ann Coulter posted a Tweet moments ago in which she called immigrants to Germany ‘fascists’, implying its particularly vicious point in history, for demanding equal treatment at the least and responding to hate as people pounded on their bus and threatened them.

Notice that Coulter included only someone saying “It is perfectly legal” for migrants to do “whatever the **** they want to do”.  Curious she failed to include the rest of the quote, “…we are human beings just like you and everyone else”.  They weren’t declaring some sole right to unfettered behavior or even indicating they would ignore any laws, as her Tweet implies.

As far as calling the hate group pounding on the bus “the past”, that is true in many ways.  This kind of hate is not for those of us living in a civilized present.  Not only that, Germans remember the lessons of World War II all too well.

There was a time when people were banging on trains and yelling curses at others for not being “German enough” as Jewish people were being transported to almost certain agonizing death.

Is that what you want, Ann?  Would you be happier if the pounding on the buses was being done as these immigrants seeking safe haven were being led to gas chambers?

Or does your glaring historical ignorance prevent you from even seeing the comparison and learning the lesson as have the people of Germany, absent these hatemongers?

Hate is hate, Ann, whether it erupts from your lips or those of others.

If responding to such intense hatred and demanding a civilized response as human beings makes one fascist, Ann, then I plead guilty as well.