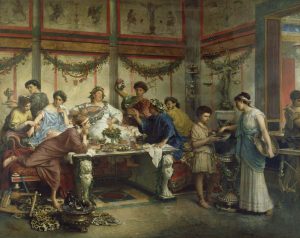 While Roman law was laying the foundation for a society of contract and exchange, Roman philosophers were listening to the Greek philosopher Epicurus, who said, “If you wish to make a person wealthy, do not give him more money, but diminish his desire.”

While Roman law was laying the foundation for a society of contract and exchange, Roman philosophers were following a different path. The most prominent of these thinkers were Cicero, Seneca, and Marcus Aurelius. In general, they disapproved of the wealth and luxury that the trade of the Empire fostered in Rome. They saw these as the cause of vice and a weakening of the moral spirit of the men of the time.

Their philosophy was tinged by what has sometimes been called “quietism,” that is, the belief that one should adjust to the circumstances that one finds oneself in, and accepts it as good and inevitable during one’s life. In the words of Marcus Aurelius:

Be satisfied with your business, and learn to love what you were bred to do; and as to the remainder of your life, be entirely resigned, and let the gods do their pleasure with your body and soul.

In their view, happiness could only come by the overcoming and removal of oneself from desire, particularly outward or material desires and wants. Man’s happiness, they argued, could not come from the attempt to constantly increase one’s means to satisfy more and more ends. No, that was the path that had no end other than permanent frustration.

Instead, they offer a different route to happiness. We find it expressed by the Greek philosopher, Epicurus (whose teachings were popular in Rome): “If you wish to make a person wealthy, do not give him more money, but diminish his desire.”

In other words, do not attempt to increase the supply of those means that serve various human ends; rather, decrease the demand for them. By each individual, in himself, reducing his desires to those that are appropriate to a “wise” and “virtuous” life. The wise man, it was said, “follows nature.”

Cicero’s Criticisms of Markets and Moneymaking

In asking what following nature meant in terms of ways of living and earning a living, they tended to place the highest significance on the “naturalness” of agriculture, and the vice and corruptions of other trades and occupations. Cicero is an example, when he said:

Now in regard to trade and other means of livelihood, which ones are to be considered becoming of a gentleman and which ones are vulgar, we have been taught, in general as follows:

First those means of livelihood are rejected as undesirable which incur people’s ill-will, such as those of tax-gatherers and usurers [money-lenders].

Unbecoming to a gentleman, also, and vulgar, are the means of livelihood of all hired workmen whom we pay for mere manual labor, not for artistic skill; for in this case the very wages they receive is a pledge of their slavery.

Vulgar we must consider also those who buy from wholesale merchants to retail immediately; for they would get no profits without a great deal of downright lying; and verily there is no action that is meaner than misrepresentation.

And all mechanics are engaged in vulgar trades; for no workshop can have anything liberal about it. Least respectable of all are those trades that cater to sensual pleasures: Fishmongers, butchers, cooks, poulterers, and fishermen. Add to these if you please, the perfumers, dancers, and the whole corp of ballet.

But the profession in which either a higher degree of intelligence is required or from which no small benefit to society is derived – medicine, and architecture, for example, and teaching – they are proper for those whose social position they become.

Trade, if it is on a small scale, is to be considered vulgar; but if wholesale and on a large scale, importing large quantities from all parts of the world and distributing to many without misrepresentation, it is not to be greatly disparaged.

Nay, it even seems to deserve the highest respect, if those who are engaged in it, are satisfied with the fortunes they have, and make their way from the port to the country estate, as they have often made it from the sea to the port.

But of all the occupations by which gain is secured, none is better than agriculture, none more profitable, none more delightful, and none more becoming to a freeman.