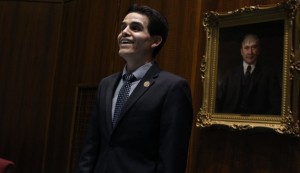 Democratic Rep. Juan Mendez stands at his desk in the Arizona House of Representatives on Thursday, March 3, 2016 in Phoenix. Mendez, an atheist, delivered the opening prayer, but it was rejected by Republican Majority Leader Steve Montenegro because he didn’t invoke God and a Christian prayer was then delivered. The opening prayer by Democrat Juan Mendez included a call to work to help the state and its residents flourish and to “honor the Constitution and the secular equality it brings.” But he didn’t pray to any deity, which infuriated some Republicans who are Christians. (AP Photo/Bob Christie)

Every time Arizona state Rep. Juan Mendez (D) shows up for work at the state Capitol, he can expect someone to ask him to seek the help of a higher power. Each session of the state House of Representatives is required to begin with a prayer — almost always Christian in nature — and while that doesn’t mesh with Mendez’s views as an atheist, he’s come to accept that it’s an important tradition for many of his colleagues.

Members of the House can sign up to lead the morning prayer, and Mendez himself has things he’d like to say — things about science and nature and humanity. But for years, he says, he’s been denied the chance to lead the invocation out of concern that he wouldn’t mention God in his remarks.

On Thursday, Mendez was finally able to deliver his own version of a prayer when a colleague offered up his slot. Mendez’s remarks held true to his values as a nonbeliever, which in turn angered his Republican colleagues and put the hotly contested issue of separation of church and state back in the spotlight.