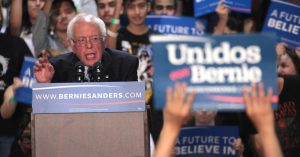 With another record-breaking fundraising effort in March, Sanders supporters give campaign financial muscle to take political revolution all the way to the convention in June

After his loss to Hillary Clinton in New York’s Democratic presidential primary on Tuesday, Bernie Sanders is facing a lot of questions—warranted or not—about what comes next for his campaign.

One thing he doesn’t have to worry about: running out of cash.

The Sanders campaign late on Wednesday filed a report with the Federal Election Commission showing it raised nearly $46 million in March—its third straight month of beating rival Clinton in the money race. The record haul shows his campaign has the financial ability to do what Sanders has vowed to do since Super Tuesday: take his political revolution all the way to the Democratic National Convention in June.

But the best approach for doing so is still very much up in the air.

“It’s affording him an opportunity to think about where we are in the campaign, what he wants to say in the weeks ahead,” Devine told NBC News.

The campaign is now looking toward April 26 primaries in Pennsylvania, Maryland, Connecticut, Rhode Island, and Delaware, followed by Indiana, which holds its primary on May 3. Top advisors also spoke Wednesday about how Sanders and his surrogates will seek support from so-called superdelegates as the convention gets closer.

As the race marches on, Sanders “could maintain, or even escalate, his criticism of Clinton on issues such as her speeches to Wall Street,” The Hill wrote on Thursday. “Or he could seek to dial down the tensions in the race, which could help unify the party heading into the Democratic National Convention this summer.”

According to the New York Times, Sanders spokesman Michael Briggs said “the campaign planned to continue to ask questions about Mrs. Clinton’s ties to Wall Street, her speeches at commercial banks, and her changing stances on policy issues. He also shot back sarcastically when asked whether Mr. Sanders might change the tone of the campaign that in recent weeks has become more contentious.”

“I’ve seen their, I’m sure, heartfelt concerns about the tone of the campaign,” Briggs told the Times of the Clinton campaign. “All I would ask them to do is look in the mirror.”

Writing at The Nation on Wednesday, D.D. Guttenplan said internal soul-searching was in order for both Sanders and his supporters:

Does the New York result mean Sanders should pack up and quit? Of course not. The spark that caught fire with his campaign will burn all the way to California—to the convention, the election, and beyond. But he—and those of us who allowed ourselves to hope he might really be president—need to start asking some questions. If Sanders isn’t running for president, what is he running for? How will he—and we—sustain the political revolution past November? Is the goal to occupy the Democratic Party—and go into the convention seeking real influence over the platform? Is it more important to get Sanders supporters into positions of power within the party? Or are both of those approaches distractions from the long-term goal of building institutional power independent of a party that has always been quick to co-opt movements but deeply reluctant to deliver radical change?

In the short term, Sanders needs to keep setting out what he’s fighting for: not just the policies he will probably never be in a position to implement, but the politics he’s already done so much to transform. And though it might seem like a restriction to lay off the personal attacks, and to rein in those of his supporters who see Hillary Clinton as the incarnation of evil, it could also be a liberation. As he rightly reminds us, when Sanders began he was barely a blip in the national polls. It was his vision of what this country could become if we freed our politics from the shackles of corporate money and our policies from the straitjacket of neoliberal orthodoxy that brought him so many victories. If he spends the next three months talking more about that vision, and less about his opponent, will that really be such a great loss?

For Sanders backers like Burke Stansbury, a community organizer who lives in Seattle, the key reason to prolong Sanders’ presidential campaign isn’t necessarily to beat Hillary Clinton, but to deepen and sustain the momentum behind a burgeoning political revolution.

“Even after Clinton’s victory in New York on Tuesday, it seems likely that Sanders will take his candidacy right up to the Democratic convention,” wrote Stansbury in an op-ed for the Guardian. “I, for one, am glad to see a tight race. The longer it goes, the more chance there is for a deepening political conversation about economic and racial justice, and the more people will become politically engaged through the process.”

He concluded, “If we put too much faith in elected officials then we sell ourselves short. The real work is continuing to build grassroots movements that can hold whoever is elected accountable, and push for radical change.”

Still, Kevin Gosztola argued in an op-ed Thursday, it’s “premature to grapple with how the movement around the campaign can continue after the campaign is over when it frankly is not over yet.”

“The Sanders campaign,” he said, “is in the midst of a war for a nomination that will give voters a viable alternative to two oligarchs in November, and it is not about to quit now.”