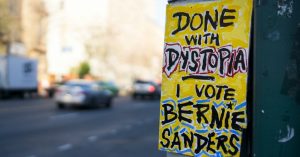 Some precincts opened two hours later than they were supposed to, while some would-be voters’ names couldn’t be found on registration lists

Amid charges of voting machine mishaps and names purged from voter rolls, New Yorkers cast their ballots Tuesday in high-stakes Democratic and Republican primaries—those who were able to, at least.

The results in New York’s closed primary could define the rest of the race, putting the Empire State in the rare campaign spotlight.

And the glare has been harsh.

There were reports that some precincts opened two hours later than they were supposed to, and would-be voters whose names couldn’t be found on registration lists.

The state’s “strict voter registration rules sparked mounting frustration and anger among Bernie Sanders supporters,” the Guardian reported, “as some discovered they were unable to vote in the primary election showdown with Hillary Clinton only after arriving at their local polling stations.”

According to the Guardian, some “registered voters arrived at polling stations claiming they had met all the requirements to switch party affiliation in time, yet still found themselves missing from the list, prompting angry scenes that may further hamper hopes of reconciling the two wings of the Democratic party once the nomination is decided.”

Gothamist managing editor John Del Signore wrote: “Some voters, including myself, are little confused about the ballot, which in the 12th Congressional District says voters can select seven delegates. But there are only six delegates listed as pledged for Bernie Sanders, while seven are listed as pledged for Hillary Clinton. I asked a poll worker if it was necessary to select seven delegates, or if I could just pick six, and she told me, ‘Oh, it doesn’t matter. Some people don’t even fill that part out.’ Whatever!”

Meanwhile, the Wall Street Journal reported that “[a] number of voters said they showed up at their usual polling sites to discover the site had been moved without notice, sending them across the neighborhood searching for their new voting location.”

“I’m very concerned,” Richard Emery, a voting rights attorney on the Upper West Side, told the Journal. “This is the third location I’ve been to today to try and vote and I just ended up filling out an affidavit. The Board of Elections is a disaster.”

With 247 pledged delegates up for grabs on the Democratic side, the stakes are quite high—especially given both candidates’ ties to New York state.

“For Clinton, a single-digit victory in the state that elected her twice to the Senate, and where she beat Barack Obama by 17 points in 2008, would signal vulnerabilities,” Politico wrote on Tuesday.

While recent polls have showed the national gap between Sanders and Clinton has narrowed to basically nothing, the former secretary of state is ahead by approximately 12 points in New York, according to the latest RealClearPolitics average of polls.

The Sanders camp, for its part, “is counting on big wins upstate to make up for Clinton’s expected strength downstate,” MSNBC added on primary day.

For what it’s worth, more people searched “How to vote for Bernie Sanders” in the last 24 hours than made similar searches about Clinton, according to Google.

When told by a television reporter on Tuesday afternoon that Clinton was saying a large victory in New York would spell the end of his campaign, Sanders responded by saying: “I think she’ll be disappointed.”