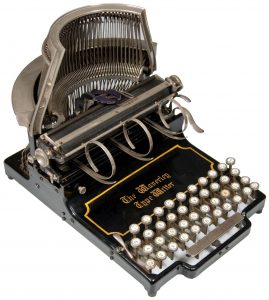 Typewriter historian Martin Howard (previously) writes, “I was able to pick up a rare and exquisite Waverley typewriter (1896) this summer in Scotland and have just the other day posted it to my website all cleaned and ready to show.”

The handsome and beautifully engineered Waverley typewriter was made in London and despite the great efforts of its inventors Higgins and Jenkins, it was manufactured for only a short period of time somewhere during the years 1895 to 1897. What is certain is that the company had gone into receivership by July of 1897.

The distinguishing aspect of its design is the position of the type bars, which stand vertically behind the platen and swing down towards the typist to strike the top of the platen when typing. This was all about giving visible tying, where one could see what one had just typed. However, with the escape for the paper blocked by the type bars, the carriage design became quite complicated. To get a sheet of paper ready for typing, the bottom edge is pushed back a few inches on the three prongs that are seen under the three hoops of the paper bail in front of the carriage. As one types the paper goes up and around the platen and curls up into a cylinder in the paper bail. The paper is then pulled out sideways.