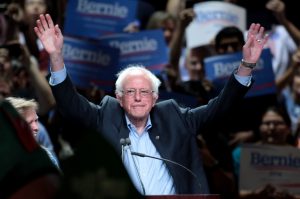 Last night on CNN, while discussing Bernie Sanders’ landslide victory over Hillary Clinton in West Virginia — which followed a 5-point Sanders win in Indiana last week — Michael Smerconish said that “Democratic super-delegates might have to rethink” their support of Hillary Clinton given how dramatically better Sanders fares in head-to-head match-ups against Donald Trump.

After Clinton’s Indiana loss, John King had told CNN viewers that “if Sanders were to win nine out of ten of the remaining contests, there’s no doubt that some of the super-delegates would panic. There’s no doubt some of them would switch to Sanders. What he has to do is win the bulk of the remaining contests. Would that send jitters, if not panic, through the Democratic Party? Yes. Yes it would.”

So what gives? Isn’t this thing over?

Almost, but not quite.

What Smerconish (and Wolf Blitzer) were discussing last night, and John King was discussing last week, is a very simple theory — call it “run-the-table” — which is easy enough to understand if you simply know the history of Democratic super-delegates and what’s happened in the 2016 Democratic primary since Super Tuesday.

So here it is — both a brief history of the “super-delegate” and an explanation of the “run-the-table” scenario that increasingly is making it into the mainstream media.