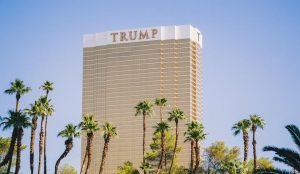 Donald Trump has garnered a lot of attention as a Republican presidential candidate. But how has this attention impacted his business interests? Are sales up or down?

To answer this question, we analyzed hotel data from Hipmunk, a Priceonomics customer and travel search engine. Focusing on Trump Hotels’ most-booked locations, we compared bookings this year to the previous year (before Trump attracted national political attention).

The results? Bookings at Trump Hotels are down big time: they have decreased 59% compared to the same period last year on Hipmunk. It seems that customers willing to spend $500 a night on a Trump Hotel room may not be fans of Trump the political candidate.

While overall Hipmunk hotel bookings have been on the rise year-over-year, that has not been the case with bookings of Trump Hotels.

Prior to his political rise, Trump Hotels were quite popular, garnering 1.7% of all bookings on Hipmunk in the major cities where Trump Hotels are located.

But in the past three months, Trump Hotels have been much less popular. Bookings are down 59% versus the the same three month period in the prior year. 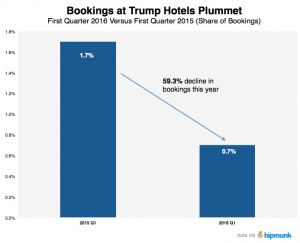 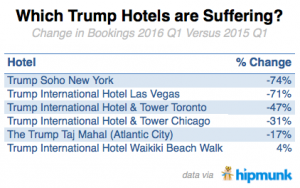 Will the Trump brand suffer permanent damage? That may depend on how he fares in the election. After all, the last names of presidents tend to become enduring brands.

For now, Trump’s candidacy seems to be hurting rather than helping his hotel business according to this data. That said, like with any analysis, caveats apply to this one: This data comes from the the Hipmunk travel search engine, whose users may skew younger and more urban than the general population.

But the lesson from all this data? If you mix business and politics, there’s a good chance it will have implications for your business.