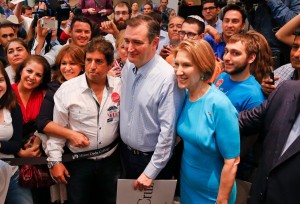 Carly Fiorina joined a rally for Ted Cruz in Miami on Wednesday to formally endorse him, calling seeing her own name on the ballot in Virginia “a thrill” but choosing to check the box by his name instead.

In a pre-rally statement she release, Fiorina said, “Ted Cruz is a fearless fighter for our constitutional rights. He has spent his life protecting Americans’ God-given liberties, and he has always stood by his word.  Unlike the status-quo political class in D.C., Ted Cruz didn’t cower when he got to Washington, he stood unequivocally for the American people. I know Ted, and he’ll do the same as president.”

This endorsement likely causes confusion for many.  In a January interview with CNN’s Dana Bash, while still running for the nomination, Fiorina said, “Ted Cruz is just like any other politician.  He says one thing in Manhattan, he says another thing in Iowa.”

“He says whatever he needs to say to get elected, and then he’s going to do as he pleases,” she continued, “I think the American people are tired of the political class that promises much and delivers much of the same.”

Fiorina’s words then and now are much different.  In January, Cruz was a typical politician who wouldn’t heed constituents and just wanted to get elected.  In March, he is a person who will defend the Constitution “fearlessly” and who will not be the “typical politician” he was two months ago.