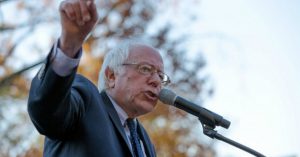 ‘We need to send a very loud and very clear message to corporate America: the era of outsourcing is over’

In a statement issued Saturday, the former Democratic presidential candidate took a stand against the air conditioner manufacturer United Technologies (UTX), which is planning to move 2,100 jobs to Mexico to maximize profits, as he announced legislation to prevent the outsourcing of U.S. factory jobs—and demanded that Trump follow through on his own vows to keep the company from going overseas.

“I call on Mr. Trump to make it clear to the CEO of United Technologies that if his firm wants to receive another defense contract from the taxpayers of this country, it must not move these plants to Mexico,” Sanders said. “We need to send a very loud and very clear message to corporate America: the era of outsourcing is over. Instead of offshoring jobs, the time has come for you to start bringing good-paying jobs back to the United States of America.”

Sanders’ legislation, the Outsourcing Prevention Act, would prevent companies sending jobs overseas from receiving federal contracts, tax breaks, or other financial assistance; claw back federal subsidies that outsourcing companies received over the past decade; impose a tax of either 35 percent of the company’s profits or an amount that equals the money saved by moving jobs overseas, whichever is higher; and imposing stiff tariffs on executive bonuses like golden parachutes, stock options, and other gratuities.

UTX, which makes the air conditioner Carrier, told its unionized workers in February that it would be shipping operations from Huntington and Indianapolis, Indiana to Monterrey, Mexico. Video footage of the layoff announcement, and the workers’ angry response, went viral; throughout his campaign, Trump vowed that if elected, he would convince UTX executives to stay in the U.S. or face a 35 percent tax.

“All of us need to hold Mr. Trump accountable to make sure that he keeps this promise,” Sanders said Saturday. “Let’s be clear: it is not good enough to save some of these jobs. We cannot rest until United Technologies signs a firm contract to keep all of these good-paying jobs in Indiana without slashing the salaries or benefits workers have earned.”

The New York Times reported last week that Carrier’s employees in Indiana earn between $15 and $26 per hour; the workers in Monterrey stand to make that much in a single day.

Trump tweeted on Thursday that he had been “making progress” on getting Carrier to stay in the U.S. The company confirmed it had “discussions” with the incoming administration, but had “nothing to announce at this time.”