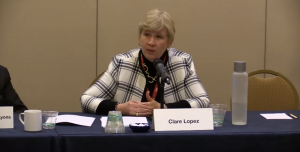 Adviser for GOP presidential candidate Ted Cruz made headlines today when she said Joe McCarthy was “spot on” about Communists infiltrating the federal government during the 1950’s. The GOP Senator from Wisconsin spent the height of his political career telling his fellow Americans that communists had infiltrated every level of the federal government.

The comments were made by Clare Lopez, an anti-Muslim activist while she was addressing the infiltration of the Muslim brotherhood on a South Carolina radio station.

Lopez framed the modern fight against terrorism as a new Cold War and then some, according to audio captured by Right Wing Watch:

We can go all the way back, of course, to the time of the Cold War and back to the 1920’s, ‘30’s, ‘40’s when communists, you know, the KGB, infiltrated our government at the very highest levels,” she said. “And then, like now, we were unprepared and in large measure unaware of what was going on, at least until the House Un-American Activities got rolling in the 1950s with Sen. Joseph McCarthy, who absolutely was spot-on in just about everything he said about the levels of infiltration. So we have precedent for this where we were not fully aware of the infiltration occurring at the time.

Frank Gaffney, Lopez’s boss at the Conservative Center for Security Policy, has agreed with her and gone one step further, calling for the reinstatement of the House Un-American Activities Committee, one of the most dystopian abuses of Congressional power in US history. Gaffney suggested that more people needed to be investigated for failing to report treasonous activity to federal officials, even accusing New Jersey governor Chris Christie of said form of treason for appointing a Muslim attorney.

The conspiracy theorizing about the evil reach of the Muslim Brotherhood doesn’t limit itself to introspection within the Republican party, however. Gaffney has claimed that the Muslim Brother has infiltrated Hillary Clinton’s presidential campaign, most notably in the form of her aid Huma Abedin.

Gaffney’s Center for Security Policy is an organization that has influenced the thinking of nearly every GOP candidate for president this cycle, inviting all 17 of them to a summit last year. Most of the Republican candidates attended.

The Center for Security Policy has done very important work, including accusing Supreme Court Justice Elena Kagan of spreading Sharia law and circulating a picture of her wearing a turban around the internet. Even Gen. David Petraeus became a target after condemning a Florida pastor for burning copies of the Quran.

It’s noteworthy Gaffney’s organization seems to be throwing its weight behind Cruz, not Trump, especially since Gaffney himself was banned from CPAC after accusing dozens of conservative activists of being members of the Muslim Brotherhood. Even Grover Norquist was part of the great conspiracy to bring regularly scheduled prayer, tolerance of other religions, and delicious falafel to the shores of the United States.

It’s notable because many Americans are so terrified of Trump they seem to be forgetting that Cruz is just as bad if not worse. Trump is a charlatan; he’ll say what he needs to say to get elected but doesn’t seem to believe in most of it. Cruz, on the other hand, is a true believer.

And the last thing we need in the White House is a true believer with friends like Frank Gaffney.