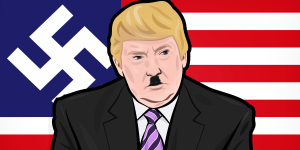 As he watched live images emerge from the terror attacks today in Brussels, Trump told CNN’s Wolf Blitzer he fully supports the idea of “going into Muslim neighborhoods,” and “looking for potential terrorists.”

“Ted Cruz suggested today the U.S. should step up its, uh, involvement, ‘going into Muslim neighborhoods,’ he described it, looking for potential terrorists. Is that something you would support?” Blitzer asked the contentious presidential candidate.

“Yes, I would — I think that’s a good idea,” Trump responded.

“I’m talking about Muslim neighborhoods in the United States, for example,” Blitzer clarified.

Trump immediately affirmed, “I would support that, yes, 100 percent.”

The candidate’s inflammatory remarks accompanied a reiteration of his plan to ban any and all Muslims from coming into the U.S.

Asked how he planned to carry out this ostensible roundup of terrorists, who somehow exclusively dwell in Muslim neighborhoods, Trump’s response confirmed suspicions he will inflate the already overarching U.S. police state:

“You do it, you do it. Let me tell you: I bet you the local police know much more than what’s … what’s going than they … than anybody would understand. I would be willing to bet that the local police, and I know it’s true with the gangs — I know that if the gangs … if the police were given their hand they would stop the gang problems in Chicago and various other places. They know the gang members, they know everything. They know things that are going on — and local police know plenty about the Muslims, too.”

While he didn’t clarify further, the intimation appears to amount to allowing police to form Gestapo-esque patrols of predominantly Muslim neighborhoods — without foundation or even suspicion those residents are involved in terrorist activity. Trump, in other words, just told the world he plans to employ police in actively targeting otherwise law-abiding United States citizens who happen to practice the religion of Islam.

This seemingly casual, offhand comment should terrify every person living in the U.S. — well, everyone who care about freedom and the fundamentals on which our government was supposedly founded.

There are any number of telling statements in Trump’s interview, but this statement, er, trumps them all. To hear for yourself, this portion of the interview begins at the 8:10 mark: