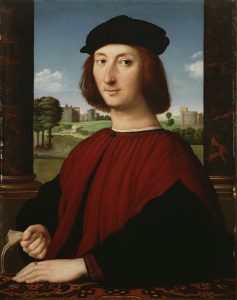 Today we wonder: Did innovative artists of the past know they were changing the course of art?

When you visit an art museum or you read about art history, you’ll see lots of terms used to describe artistic periods and styles—Renaissance, Baroque, Impressionist, and so on. But did the men (yes, they were mostly men) making the art know about these labels, or identify with them? Or, as a visitor recently asked me, did Renaissance artists know they were in the Renaissance?

I loved this question and decided to find out.

What Is the Renaissance?

As we think of it today, the Renaissance refers to a time period in which a series of shifts took place in European art. Beginning in the early 1300s, artists looked again for inspiration to ancient Greece and Rome, which they saw as a high point in European art and culture. Creators of all kinds—painters, sculptors, architects, writers, musicians—began to pursue art with self-conscious attention to the glorification of man, realistic portrayal of the human body and landscape, and the artist as an individual.

Today we call this new age for music, art, and philosophy, spanning the 1300s to the 1600s in Europe, “the Renaissance.”

I asked Davide Gasparotto, senior curator of paintings at the Getty Museum, whether the artists doing this work identified as “Renaissance” artists at the time.

The answer? Sort of yes…but sort of no. “As always in history,” he added, “it is very complex.” To see how, we have to consider what inspired the use of the term to begin with.

Who Used It First—And Why?

The word “Renaissance” is French for “rebirth.” It came into common English usage in the early 1800s to refer to the period as a “rebirth” of vaunted antiquity.

But the first mention of a term referring to this idea came almost 300 years earlier. In 1550, in the book Lives of the Most Excellent Painters, Sculptors, and Architects, Giorgio Vasari used the Italian word rinascita, meaning “renewal” or “rebirth” to embody a new style of art being practiced by artists like Leonardo da Vinci, Michelangelo, and Raphael. (Today the usual Italian term for the Renaissance is Rinascimento.)

Often called Europe’s first art historian, Vasari divided these artists into three periods in his highly influential tome. The Prima Eta (“First Age”) included Giotto, one of the earliest Italian painters to move away from stylization and embrace a more naturalistic approach to depicting humans, landscape, and architecture. His efforts were so innovative that his artistic successors in the fifteenth century spent years building on his technical innovations. Vasari credited him as heralding a new moment in painting; art historians today tend to identify him as part of a proto-Renaissance.

Among the artists Vasari included in the “Second Age” were Masaccio, Donatello, and Brunelleschi, all active in the 15th century. Thanks to books like Lorenzo Ghiberti’s I Commentarii, one of the earliest autobiographical accounts by an artist, we know that these artists were consciously pushing new artistic conventions, including the naturalistic rendering of the human body (inspired by examples from antiquity) and of the environment (through the development of one-point perspective).

Vasari’s “Third Age” was for the most part his own time—the first half of the sixteenth century. The artists of this stage worked in la maniera moderna—“the modern manner”—that had evolved from Giotto and culminated in the highly naturalistic work of the artists most famously associated with the Renaissance: Leonardo, Raphael, Michelangelo, Titian, and Correggio.

So, during the fourteenth to seventeenth centuries, the word Renaissance (or Rinascimento) may not have been falling from the lips of artists, but they were aware that something new was afoot. Figures of the rinascita were deliberately pushing the artistic envelope. They were pouring drama and emotion into their masterpieces, and while inspired by classical Greek and Roman art, they also were spurred by a competitive desire to create something new and different than previous generations. In the process, they also birthed the field of art history as we know it today, and paved the way for artists that followed to also consciously strive to create something new.

Reading to Feed More of Your Renaissance Curiosity