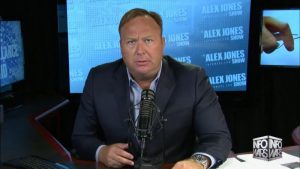 Donald Trump’s conspiracy-theory-ridden presidential campaign didn’t emerge from a vacuum. Many of the bogus claims that Trump has leaned on in his campaigns are ones that we’ve been hearing from Republican politicians for years, such as the allegations that climate change is a myth or that Democrats use massive voter fraud to win elections.

But Trump has moved the GOP even farther to the right with his embrace of conspiracy theorist extraordinaire Alex Jones, a Texas-based radio host whose almost comical rantings and ravings have taken on a much darker tone now that the GOP nominee for president has appeared on his show, hailed his “amazing” reputation and started to repeat his words.

Jones’ “amazing” reputation includes the infamy he has earned for encouraging violence against liberals and suggesting that incidents ranging from 9/11 to the Oklahoma City bombing to the Sandy Hook massacre to a baby crying at a Trump rally were all “false flag” events.

But despite this record, Trump seems to have no problem using Jones as a source of misinformation. As we previously reported:

Jones has bragged that he advises Trump off-air and took credit for the candidate’s conspiracy theory about Rafael Cruz, the father of Trump’s former rival Ted Cruz, being involved in the assassination of John F. Kennedy. When Trump falsely claimed that thousands of Muslims in New Jersey celebrated on 9/11, he cited a post on Jones’ InfoWars website and told Jones during an appearance on his program that his assertion was correct because people on Twitter told him so.

Trump has also promoted Jones’ claim that the late Supreme Court Justice Antonin Scalia was murdered and repeated Jones’ belief that all the polls and the election itself are rigged against him. His recent remarks framing Hillary Clinton as the devil and warning about a globalist conspiracy to rig the vote and destroy U.S. sovereignty are also classic Jones. Not to mention that Jones has been one of the most vocal champions of bizarre claims about President Obama’s life and background, claims often spread by Trump.

Jones, who regularly interviews Trump confidant Roger Stone, has boasted that “it is surreal” to see Trump repeat him “word-for-word” on the campaign trail.

While Trump may not be joining Jones in railing against space lizards and gay-inducing juices, it is indeed surreal that Trump appears to use Jones as one of his chief sources of information.