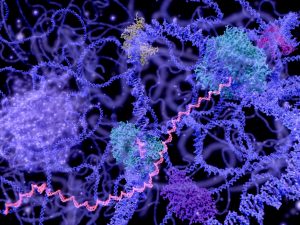 With over 75 million baby boomers in the U.S. alone, age-related diseases are a major concern in the health care system. The connection between aging and cancer has become a pillar in medicine: we know that as we age, our cells tend to accumulate damaging changes in their DNA, eventually becoming unfit to perform their normal functions.

My lab has found that examining a cell’s RNA may have the potential to identify the changes that our cells gain from aging. The benefit of manipulating RNA rather than DNA is that the cell’s blueprint does not change, which could cause unpredictable, permanent changes to the cell. This focus on RNA represents a potentially major shift in how scientists try to prevent cellular damage.

So many divisions, so little control

The causes of damaging changes to DNA are many. Some mistakes occur while a cell divides. It then inherits an incorrect DNA code from the parent cell. This can lead to an aberrant, malfunctioning cell that leads to cancer or other life-threatening diseases.

Other hits are triggered by extrinsic factors, such as exposure to UV light or irritating substances.

While we can limit the exposure to some of these factors – for example, by putting sunscreen on and avoiding active or passive smoking – limiting other hits is out of our control.

For decades, researchers have investigated the oldest living people across the world, to understand why these individuals seem to age slower.

Cancer is the second-leading cause of death in the United States, although it is fatal to only 4 percent of centenarians, 10 times less than to the middle-aged, even if they seem to accumulate as many mutations as everybody else. 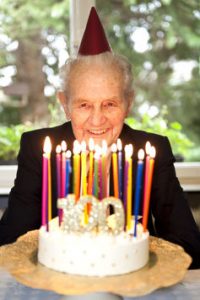 The centenarians’ secret partially relies on particular genes that make the oldsters less vulnerable to the onset of fatal diseases. Unfortunately for most of us, that kind of longevity is handed down only to immediate relatives.

Fate is not (always) set in stone

What if we didn’t inherit the longer-life DNA cocktail? Could we prevent age-related diseases, or even rejuvenate cells?

As someone who studies the inner workings of cancer cells, I find the questions of whether a cell’s fate can be flexible to be extremely compelling. If a cell has aged, can we make it behave like a young one anyway, regardless of its possible accumulated “hits”?

In biology, the concept of cell aging is in many aspects opposite to cell reprogramming, or the process of taking an adult cell and turning it back to a “younger” state. The work of Nobel Prize winner Shinya Yamanaka’s group was groundbreaking in this field.

As early as 2006, they showed how to, in essence, return adult cells into immature stem cells, or what are called pluripotent stem cells. The researchers hijacked the cell’s fate by inserting four of what are called stem cell transcription factors. These factors will act like “turn-on” switches for genes that are normally shut down in adult cells.

Since then, these reset, immature cells, called induced pluripotent stem cells (iPSCs), have been derived from a multitude of tissues, including skin, liver and pancreas.

These iPSCs have great potential in regenerative medicine, but they bear a flawed core. Their applications so far have been limited, because there is risk of potential DNA modifications as a result of the reprogramming process.

While many safer and highly efficient techniques to edit the DNA sequence, such as the CRISPR/Cas9 system, have been introduced since then, a provocative question started to pound into scientist’s heads: Can we change a cell’s fate without changing its blueprint?

As a result, scientists began to consider RNA. If DNA were a musical score, RNA would be the orchestral arrangement.

At the cellular level, messenger RNA molecules are the link connecting genes in a DNA sequence to the final executors, or the proteins that carry on the cell’s functions. These messenger RNAs molecules are assembled by a process called RNA splicing.

Like a tailor, splicing proteins will scan the immature messenger RNA. This is RNA that contains parts – introns – that will be left out after splicing. Immature RNA is “in progress,” like a sketched drawing that still requires fine touches.

As they scan the immature messenger RNA, splicing proteins will look for “cut/paste” signals. As a result, only parts that carry relevant information towards protein assembly, namely exons, will be retained, while the “leftovers,” or introns, will be spliced out.

This process needs to work like a well-oiled machine in the cells. Wrongly assembled messenger RNAs may result in proteins with no function, or worst, aberrant function.

This sophisticated machinery also contributes to alternative splicing, which generates an array of different messenger RNAs from the exact same DNA sequence. Such variability resembles some family reunions: all of your cousins have the same nose, but one of them is a poet and another one a stockbroker.

Alternative splicing occurs in the majority of human genes and in all cells, normal or tumoral. With aging, the splicing machinery becomes less accurate, and alternative spliced products become more common.

Recently, our research group placed this mechanism under the microscope, in the context of an age-related disease, acute myeloid leukemia, a blood cancer.

In this disorder, the culprits are hematopoietic stem cells. These are immature cells that can develop into all types of blood cells, including white blood cells, red blood cells and platelets. In acute myeloid leukemia, these cells are stuck at the immature state and lack the ability to develop all the other cell types.

In our study, recently published in Cell Stem Cell, we described how, in the absence of DNA mutations, the process of RNA splicing was heavily disturbed in tumor cells. We saw, to our surprise, that tumor cells had a very different splicing pattern compared to the one in their normal counterparts, aged hematopoietic stem cells.

These observations from our study suggest that, at the RNA level, aged cells and tumoral cells are quite different. Indeed a cell may be old, but not cancerous or likely to be.

Regardless of one’s DNA, particular alternatively spliced RNA variants may help us distinguish “normal” aged cells from pre-cancerous and cancerous ones. That will lead to potential new therapeutic strategies, as well as to the ability to detect early signs of aging and to selectively target senescent cells, cells that irreversibly stopped dividing.

A pill to clear out aged cells?

This research is in early stages, but the ideal goal would be to design a pill that can clear out aged cells.

Earlier this year, a group of researchers from the University of Arkansas described a novel compound, (ABT263), able to clear out aged cells in mice. The study, published in Nature Medicine, focused on hematopoietic senescent cells, which naturally accumulate during aging. As result of aging, the cells become less functional and unable to support normal production of white and red blood cells.

The compound that targets the BCL-xL was able to reduce the number of senescent cells, overall rejuvenating the mouse hematopoietic system. Similar results were observed in senescent muscular cells, thus opening intriguing scenarios to prevent the skeletal muscle decline typical of aging.

These findings do not stand alone. Indeed, several research groups showed how different types of aged cells fat and vein cells in this case, depend on particular spliced variants of the BCL-2 family.

The different expression of BCL-2 RNA splicing variants during aging is emblematic of just how flexible RNA can be. While anti-aging drugs like ABT263 still target the protein that originates from the alternative spliced longer messenger RNA, the ability to directly manipulate RNA, rather than DNA, is becoming more and more appealing for research and medical purposes.

The benefit is that unique RNA splicing variants that distinguish normal aged cells from malignant ones provide targets that do not require to change a cell’s blueprint. Several RNA-based therapies are currently under clinical investigation for a range of diseases, including cancer and infections, and even the adaptation of the cutting-edge DNA-editing CRISPR/Cas9 system is in the works to target RNAs in mammalian cells.

Prevention of age-related conditions is no longer science fiction. Clearance of senescent cells in mice has been associated to tissue rejuvenation, such as improved heart function, better exercise and blood cell-making capacity, even longer life span in some instances.

Are you ready for an RNA makeover?