But the British soon got the hang of profanity. 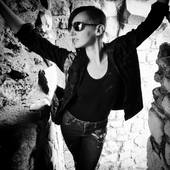 When learning a new language, what’s the first thing most of us do? If you are like me, you flick through the dictionary to find all the naughty words. And a quick glance on Amazon will reveal a veritable library dedicated to the rigorous pursuit of insulting around the world. We seem to be just a little obsessed – and why the hell not?

But we actually don’t need to reach for the nearest Collins dictionary to pick up some polyglot profanities. Many English swear words have come from different languages over the centuries. For example, the classics – “fuck”, “shit” and “cunt” – are words the language shares with older Germanic and Scandinavian languages. Fuck is likely to be cognate with the Dutch “fokken”, which in the 15th century meant “to mock” – and may also be related to Middle High German “ficken”, meaning “to rub”’. Both words began to be related to sexual intercourse in the 16th century.

The earliest mention we have in English for fuck (in the sense of copulation) is in a Latin-English sermon from 1500. That’s right, a sermon (find it here on page 91). What is particularly fascinating here is the encryption – with each letter representing the one before it in the alphabet, suggesting some level of aversion to the word:

Decrypting the last four rather incriminating words gives us: “fvccant vvjvys of heli” – which, when translated means: “They [monks] are not in heaven because they fuck the wives of Ely.”. To decipher the code, we have to bear in mind the differences in both the alphabet and spelling between then and now: the letter “w” did not exist, instead, one could use “vv” to represent this sound. You could also use “j” in the place of “i”, and “v” in the place of “u”.

Fuck also appears in Middle English names and place names, often meaning “to strike”. Hence Henry Fuckebegger (on the record in 1286) most likely beat the poor, rather than shagging them. Shit and cunt, which both have cognates in earlier Germanic and Scandinavian languages, have also been used in placenames from the Middle Ages. Skidbrooke in Lincolnshire, for example, appears in the Domesday book as “Schitebroc” – that is: “Shit-brook”. In fact, if you ever walk down a Grape or Grove Lane, chances are it used to be one of the many “Gropecuntlanes”, denoting a medieval red-light district. 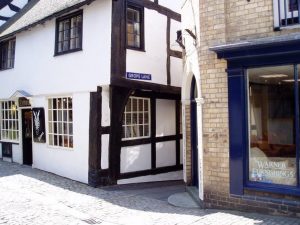 So we know that a lot of our favourite swears are loans from the Germanic and Scandinavian language families. Well, yes and no. The words may come from these origins, but where their use comes from is where it can get interesting. I’m about to make the case that one of the most quintessentially British swear words is, in fact, kind of French. The word I’m talking about is “bloody”, as in, every time Harry Potter’s Ron Weasley exclaims “Bloody hell, Harry!”

The origins of this one seem consistent with the rest of the swear words – it’s a Germanic word that appears in Old and Middle English as an adjective meaning “bloodthirsty”, “cruel” and “murderous” alongside the more obvious “bloodstained” sense. But nowhere is it used as a swear word. One could make the case that the swear use comes from contact with Anglo Norman, which was a variety of French that came with the Normans in 1066. This is because it is in Anglo Norman that we find the French word “sanglant” (meaning “bloody”) being used as a swear word.

Sanglant appears twice in a 1396 version of a conversation manual called the Manières de langage, which was essentially the textbook for learning French at the turn of the 15th century. It appears in insults such as “senglant merdous garcion” (“bloody filthy rogue”), and “senglent filz de putaigne” (“bloody son of a whore”). Indeed, sanglant as a swear word seems to have enjoyed a particularly Anglo-Norman flavour.

In the continental French farce Pathelin (1457), the eponymous character attempts to avoid repaying a debt by babbling in various French dialects in an attempt to appear mad. He utters the words “sanglant paillart” (“bloody bastard”) while speaking in the Norman dialect. Moreover, in the Chronique de Charles VII, the French call the “Angloiz et Normans” (Angles and Normans) by the insult “senglans puans mezeaulx porriz” (“bloody putrid rotting lepers”). Here, the French are ironically insulting the English in one of their own tongues, which was at that time a dialect of French. 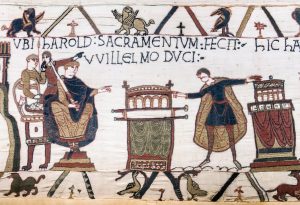 Not that kind of swearing, silly! Although the Norman Conquest give English people a whole new set of naughty words. Myrabella, CC BY

It is only after the appearance of “sanglant” that we then get “bloody” as a swear word – which means that it is very likely that this seemingly Germanic word has assumed a Francophone character.

Research into the English language reveals that the UK shares more with Europe than many realise. The language contact situation is particularly diverse for Britain, with heavy influence from Germanic/Scandinavian languages. As the evolution of the word “bloody” suggests, Anglo Norman also played a fundamental role in how English speakers use words.

But for Anglo Norman, the key message is that this was a variety of French that was viewed in the Middle Ages as a British language. Hence, English has evolved from a background of significant linguistic diversity that has formed part of the country’s identity for centuries. And the traces of that are sometimes hiding in plain sight.