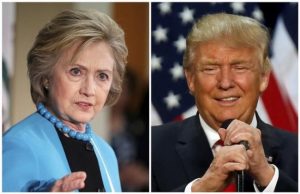 Americans’ demand for an alternative to the two main presidential candidates has surged since the last election, a Reuters/Ipsos opinion poll shows, underscoring the unpopularity of Republican Donald Trump and Democrat Hillary Clinton.

Based on 2,153 interviews, Friday’s poll results suggest a strong potential for a third-party candidate – like Gary Johnson of the Libertarian Party or Jill Stein of the Green Party – to take enough of the vote in the Nov. 8 presidential election to influence its outcome.

The poll also showed a majority of American voters have an overall “unfavorable” view of both main candidates, with 46 percent of Clinton supporters and 47 percent of Trump supporters saying their top priority when voting will be to stop the opposing candidate from reaching the White House.

Demand for an alternative could be decisive in hotly contested battleground states. In Florida in 2012, for instance, Obama won by less than 1 percentage point. If this year’s race is just as tight, third-party candidates could draw enough support to flip the state from one major party to the other.

Despite this, both Johnson and Stein have a problem that make their influence hard to predict – most voters still do not know who they are. Of likely voters, 23 percent say they are at least “somewhat familiar” with Johnson, a former governor of New Mexico. That drops to 16 percent for Stein, a physician.

Johnson could appeal to both liberals and conservatives. He wants to legalize marijuana and replace income and payroll taxes with a consumption tax.

Stein could make a strong bid to backers of U.S. Senator Bernie Sanders of Vermont, who ran a close race with Clinton for the Democratic presidential nomination. Stein wants to abolish student debt and raise the federal minimum wage to $15 an hour. She also aims for the country to run on renewable energy by 2030.

Stein’s communications coordinator, David Doonan, said that the campaign is working to boost her numbers and that the Green Party is circulating a letter that directly appeals to people who supported Sanders. “He also started very low” in the polls, Doonan said.

So far it appears that Johnson and Stein draw support evenly from Clinton and Trump when they are included in opinion polls. In a four-way race, 45 percent of likely voters support Clinton, 34 percent Trump, 5 percent Johnson and 4 percent Stein, according to a separate five-day polling average on July 8.

Given a little more information about the two alternative candidates, respondents who back Johnson and Stein draw more deeply from Clinton’s support.

Some 44 percent of likely voters support Clinton, 34 percent Trump, 7 percent Johnson and 5 percent Stein, after reading the following statement, according to the poll: “Jill Stein, the Green Party candidate for President, has taken an environmental position supporting a strong government role limiting carbon-based fuels, such as coal. Gary Johnson, the Libertarian candidate for President, has supported severely limiting the government’s role, including slashing taxes and reducing programs such as Medicare and the military and broadly decriminalizing currently illegal drugs.”

The Reuters/Ipsos poll is conducted online in English with American adults in the continental United States, Alaska and Hawaii. The survey of voters who want an alternative to Trump and Clinton included 2,153 likely voters and has a credibility interval, a measure of accuracy, of 2 percentage points. The five-day average poll that ended July 8 included about 1,240 likely voters and has a credibility interval of 3 percentage points.