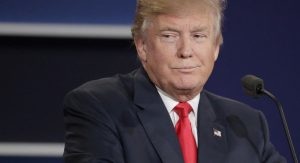 It was a do-or-die moment for Donald Trump, and he died.

With less than three weeks until we can begin to try to remember what life was like before Trump’s toxic stain befouled every thing his small hands touched, Trump ceded the third and mercifully final presidential debate in Las Vegas to Hillary Clinton while guaranteeing that the focus during the closing days of the campaign will be on his fitness for office because of his utter lack of respect for it.

Clinton acted like she was on the verge of clinching the presidency when — in a surprising and deft role reversal — she was not mocking Trump. He, in turn, acted like a blustering schoolyard bully who realizes he has lost the fight of his life while confirming in perhaps his only candid moment of the night that he might not accept the outcome of an election it increasingly appears he will lose by huge popular and electoral vote margins.

In a pulse-stopping moment that will go down in history while shadowing and, one can only hope, forever tormenting Trump, moderator Chris Wallace of Fox News asked him if he would accept defeat.

“Chris, let me respond to that,” Clinton interjected. “That’s horrifying. We’ve been around for 240 years. We’ve had free and fair elections. We’ve accepted the outcomes when we may not have liked them. And that is what must be expected of anyone standing on a debate stage during a general election.”

“There is a tradition in this country, in fact one of the prides of this country is the peaceful transition of power and that no matter how hard-fought a campaign is, that at the end of the campaign that the loser concedes to the winner . . . and that the country comes together in part for the good of the country. Are you saying you’re not prepared now to commit to that principle?”

“I’ll tell you at the time,” he finally said. “I’ll keep you in suspense, okay?”

Is Trump unaware of what his words mean and their enormous consequences? Or does he just not care? Probably both, but it was difficult to tell because his demeanor seemed less that of a man struggling to remain composed, which he ultimately failed to do, than being on the verge of giving up and merely content to insult America rather than his all too vulnerable opponent.

If anything, Trump seemed even less prepared than he had for the first two debates, which is not surprising in light of his debate coach, disgraced former Fox News boss Roger Ailes, quitting in disgust this week because Trump “couldn’t focus.” He had no script and rambled disjointedly on policy points. While he whined, as usual, he barely responded to Clinton’s trenchant jabs, whether her assertion that he had used undocumented workers to build Trump Tower or Chinese steel in his Las Vegas hotel.

When Clinton called Trump a puppet of Russian President Vladimir Putin, he limply replied, “No puppet. No puppet,” adding emptily, “You’re the puppet.”

When Clinton jabbed him about hosting The Celebrity Apprentice television show while she was hunkered down in the White House Situation Room monitoring the raid that killed Osama bin Laden, he feebly allowed that “The one thing you have over me is experience.”

Shock of shocks, he avoided pursuing a red-meat question from Wallace about sexual misconduct allegations against former President Bill Clinton. He feebly tried to discredit the nine women who have accused him of predatory behavior in the wake of the Access Hollywood hot-mic video that has had much to do with sending his campaign into a tailspin that was predictable, as well as inevitable, because it had been running on fumes for so long and reality was quickly catching up to it.

That reality is now verging on cluelessness. Trump has been campaigning in states he has lost or has little chance of winning, while his travel schedule for the next several days suggests that he has no electoral map strategy, only grievances, revenge threats and rants against an anti-Semitic tinged “global conspiracy” to rig the election. His is no longer a presidential campaign in any traditional sense unless you consider it normal to rely on swamp gas from WikiLeaks, threaten a constitutional crisis by inciting your supporters, and show more interest in ginning up rationales about why you are going to lose rather than trying to win. And letting President Obama get inside your head.

Trump was a different man last night in that he was consistent, for a change. But he was consistently underwhelming, sometimes seemed bored with the whole affair, and his performance was a kind of slow-motion meltdown. He seldom talked over Clinton and the moderator as he had regularly done in the first two debates, and had to struggle to keep up.

“Such a nasty women,” he grumbled at one point. “Nobody has more respect for women than I do,” he said at another in a sad, now oft-repeated rejoinder in claiming that his accusers “have been debunked.”

Keeping it classy, as always, Trump had invited Obama’s Kenyan-born half-brother, Malik, who is a Trump supporter, to the debate in an effort to revive his false accusations that the president was born in Kenya. Irony of ironies, under Trump’s immigration plan, this Muslim from a troubled African land targeted by terrorists would be denied entry into the U.S.

For the reality television star, the Las Vegas debate was yet again all about his self righteous self, not America and a people who cry out for a better and more secure future. It also was another tragic chapter in the devolution of the Republican Party.

Donald Trump is so abjectly ignorant of how our political system is supposed to work that it has become glaringly obvious that he is no longer running against Hillary Clinton. He is running against democracy.