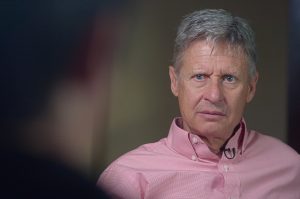 Gary Johnson appeared on CNN’s Reliable Sources Sunday morning where he made a gaffe that might just end his campaign. During an interview, Johnson said that he is “just grateful that nobody got hurt” during a bomb explosion in New York City Saturday night. Johnson appeared to be unaware that 29 people were injured in the blast.

“First of all, [I’m] just grateful that nobody got hurt,” Johnson said. “Secondly, law enforcement is on the scene, responders are on the scene. If there’s anything I learned having been governor of New Mexico for eight years is that these people really do care, they are really qualified.”

“Look, we’re going to find out who is responsible,” Johnson continued. “Whether it’s an individual or a group, they will be brought to justice. And that is something that all of us demand. All of us!”

This is the second time that Johnson made an egregious error during a media appearance. Earlier in September, Johnson was questioned on how he would deal with the refugee crisis in the Syrian city of Aleppo. Johnson responded by asking “What is Aleppo?” The gaffe was pretty bad but it didn’t appear to hurt him in the polls.

While I would prefer (marginally so) a Johnson administration to the nightmare that a Trump administration would be, this is not the type of mistake that a serious political candidate should ever make. Leaders need to be informed about a situation in order to respond accordingly. This is information that Johnson should have been aware of.

Johnson did not reach the threshold needed to in the polls to take a podium in the upcoming presidential debates. That fact made Johnson’s already incredibly slim chance of actually winning the election to an impossibility.

As others have noted Johnson may very well end up being the determining factor in this year’s presidential election. This gaffe may very well take some of his influence away he has in determining the outcome, should it be enough for his supporters to defect to either major candidate’s campaign.

You can watch the video below.