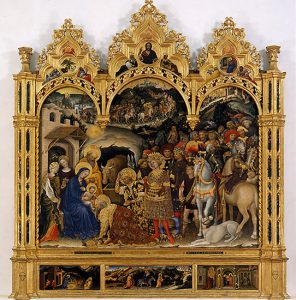 When looking at Gentile da Fabriano’s Adoration of the Magi, imagine yourself in front of it. Not standing in front of the painting in the bright Uffizi gallery, but in front of an altar in a dark sacristy, watching flickering candlelight dance on layers of silver, gold and paint that have been molded, etched, and glazed into glittering textures.  The effect would be overwhelming. Only after this visual shock would you begin to look more closely, wondering what the painting is actually about, who could have painted such a thing, and—perhaps just as importantly for the Renaissance viewer—who could have possibly afforded it. The answers to these questions are complex and intertwined. Yet, with a little historical context, they can be found in the painting itself. 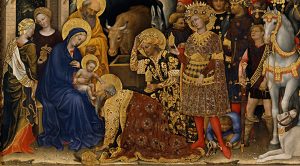 An altarpiece fit for kings

The altarpiece depicts several gospel stories surrounding the birth of Christ as they were retold in the Middle Ages and Renaissance. In the main panel, three Magi (wise men and kings believed to come from unknown, eastern lands) offer gifts to the newly born Christ child. Their adventure begins in the background: smaller scenes of the Magi fill an extraordinary landscape in the three arches above, allowing us to follow their journey in a cartoon-like, continuous narrative. 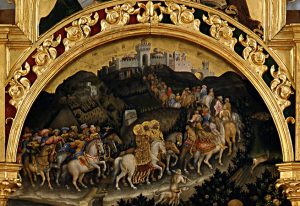 At far left, they climb a mountain in search of the star they believed would fulfill an ancient prophecy telling of a great king. Following this star, the magi lead their impressive retinue to Jerusalem, shown at the top center of the painting (see image above), and then to the smaller town of Bethlehem at right upper corner.

The main action of the panel then unfolds in the foreground, where the Magi finally arrive at the small cave where Joseph and Mary have been forced to take shelter with their newborn child. Haloed and resplendent, each king takes his turn offering a gift of gold, frankincense, or myrrh, removing his crown, and kissing the foot of the tiny baby. 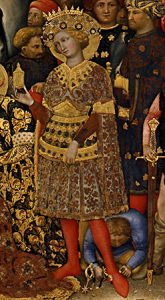 As in earlier images of the Magi, they are accompanied by large numbers of courtiers and attendants on horseback as if they were emissaries from a foreign country. More than previous artists, Gentile used the journey of the Magi as an opportunity to display his visual imagination and technical skill. The ‘kings’ do not wear ancient clothing, as one might expect from a biblical story, but imaginative costumes designed to look luxurious and vaguely exotic. The royal retinue is bursting with varied figure types, intricately patterned brocades, and rare animals. Foreground figures are almost stacked on top of one another, as if the ground is tilted forward in order to fill a limited space with a maximum number of figures. Such decorative opulence is continued in the ornate, three-arched frame. 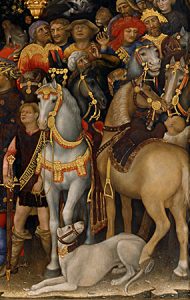 The altarpiece is not just visually busy, it is also rich with narrative detail. The dog in the right foreground looks up in fear toward a horse that is about to carelessly step on him.  At far left, two female attendants curiously (and somewhat rudely) inspect the precious gift the elderly king has already presented to the holy family.

Even the background includes stories-within-stories. Look for a lonely traveller being accosted by thieves, or a leopard preparing to pounce from his seat on the back of a horse toward a local deer he has just spotted. These anecdotal, even humorous incidents invite the viewer to inspect each area of the painting carefully, discovering something new at each turn.

From Fabriano to Florence

This was the sort of visual abundance at which Gentile da Fabriano excelled. The artist’s impressive skills were nurtured during his travels to artistic centers throughout Italy. As his name suggests, Gentile was from the town of Fabriano, over a hundred miles southeast of Florence. Years spent in the northern towns of Venice and Brescia in particular encouraged his love of courtly ornamentation and an interest in the close observation of plants and animals. These sojourns also helped build his reputation, and his arrival in Florence by 1422 at the height of his powers would have caused quite the tizzy among the city’s artists and the elite families who patronized them.

At the time, Florence was awash with creativity, a crucible of varying artistic styles. In the works of Lorenzo Monaco, the most successful Florentine painter in these years, an infusion of curving, northern European forms enlivened the inherited tradition of the previous century.

New directions were being pioneered in the practice of sculpture and architecture: Brunelleschi had just conducted his now famous experiment in perspective and the sculptor Donatello helped to revive a taste for classicizing figures and illusionistic depictions of space. The young Masaccio was a scant few years away from changing the history of art by exploring these innovations through the medium of painting.

Into this moment of visual experimentation and change stepped Gentile da Fabriano, a virtual artistic celebrity throughout Italy and beyond. He soon received a prime opportunity to demonstrate his abilities to the city: a prestigious commission from Florence’s wealthiest citizen, Palla Strozzi. Strozzi spent an unprecedented sum on the building and decoration of his family’s chapel in the sacristy of the church of Santa Trinità. Sometime before 1423, the banker turned to Gentile for an altarpiece as part of this project. The Adoration of the Magi represents the result of this commission, showing us that Gentile knew just how to dazzle an expectant audience. 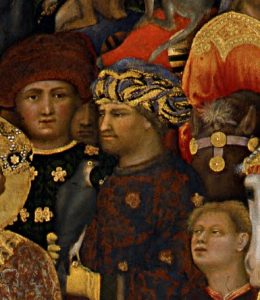 Although we are not sure why a scene of the Adoration was chosen for the painting, it seems likely that Palla saw the subject as an opportunity to display his status in other ways.

The courtly retinue of Gentile’s painting reminded viewers of Palla’s diplomatic credentials: the banker had travelled as a member of official Florentine visits to various cities throughout Italy.  He even had himself depicted as one the Magi’s courtiers. Just behind the third king, he stands holding a falcon—a reference to his family, since strozzieri was the Tuscan word for “falconer”  (left). 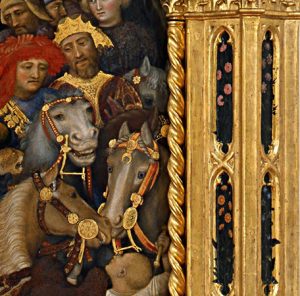 Other personalized symbols are cleverly included in the painting. The bridle on the white horse to the far right, for example, is decorated with a crescent moon, the central feature on the Strozzi coat-of-arms.

A different kind of naturalism 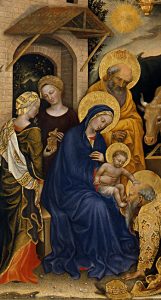 Gentile’s altarpiece visually announced the amount of gold his patron could purchase and the caliber of artist he could afford to hire. But it also displayed Palla’s cultivated taste for the new and daring. For all of its apparent preoccupation with wealth and worldly status, the Adoration celebrated nature in a way that few paintings had before. People, animals and their movements are carefully observed. Flowers seem to burst forth from the pillars that bracket the frame (see detail above). The subtle modeling of figures’ faces is quite different from the stark contours seen in paintings by popular Florentine artists such as Lorenzo Monaco. And Florentine viewers would surely have noted how fur and fabric were depicted using softer brush strokes than they were used to seeing. More remarkably, the scenes within this complex structure create a sort of visual dissertation on different kinds of light and shadow. In the main scene, the famous star of Bethlehem illuminates surrounding trees, gilding the edges of their leaves and casting intricate shadows behind the heads of the maids at left.

The small panels below the main scene (a supporting structure known as a predella) are even more experimental in their depiction of different kinds of lighting. The Nativity (image below) is imagined as a night scene with multiple sources of light: the supernatural radiance emanating from the small Christ Child, the brightness of the angel appearing to shepherds in the background, and the much softer glow of the moon at top left.

In the middle predella panel, the new family flees to Egypt against a landscape bathed in the blazing midday sun – a raised golden orb amid a blue sky showering the nearest hillsides in gold. The last panel shows Christ’s presentation in the temple, the building’s dark interior warmly lit by a wall lamp at its center.

Gentile used real gold to achieve many of these subtle lighting effects, demonstrating his ability to combine intricate manipulation of precious materials with an interest in naturalism. Perfecting a technique that would be copied by many other artists, he layered gold leaf underneath layers of paint to lend brightly lit surfaces an added glow—an effect that would be more readily apparent in candlelight. This means precious metals are woven underneath the surface, on the surface, and protruding from the surface, like a tapestry made of paint and gold.

To the modern viewer, Gentile’s Adoration may seem too busy, too ornate and too crowded. Even art historians have sometimes had difficulties looking past its emphasis on patterning and flattened space to see how this painting and other works by Gentile contributed to the flowering of the arts in early Renaissance Florence. Yet the altarpiece’s very richness helped to insure its influence, allowing artists to draw different lessons from Gentile’s painting techniques and visual interests. These contemporary viewers likely understood what present-day visitors to the Uffizi might forget: that the Adoration was not designed to be taken in at a single glance. If we remember this and try to look at the image the way it was meant to be looked at—again and again—it will reward each viewing.