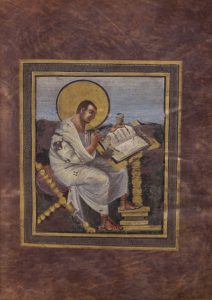 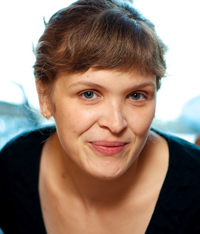 According to legend, the Vienna Coronation Gospels (c. 795) were discovered in Charlemagne’s tomb within the Palatine Chapel in the year 1000 by Otto III; the emperor had apparently been buried enthroned, that is, sitting up, with the Gospels in his lap. A gospel book is a book containing the books of the four evangelists, Matthew, Mark, Luke and John, who each offer their story of Christ’s life and death.

The manuscript is clearly a luxury object, written in gold ink on purple-dyed vellum. Characteristic of the Carolingian Renaissance, the artists of the Coronation Gospels were interested in the revival of classical styles, which effectively linked Charlemagne’s rule to that of the 4th century ancient Roman emperor Constantine. The classical style is evident in the poses and clothing of the four evangelists, or Gospel writers, who recall images of ancient Roman philosophers (for example, this one from The Metropolitan Museum of Art). Charlemagne probably had this Gospel book made before he was crowned emperor. It is such an impressive book that it was used in imperial coronation services from about the twelfth to the sixteenth century. 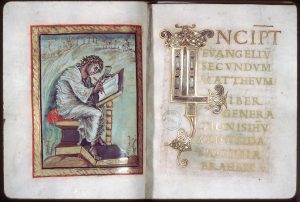 Following the creation of the Coronation Gospels, the Ebbo Gospels (c. 816-35) are most famous for their distinctive style in contrast to contemporary Carolingian illuminated manuscripts. The Ebbo Gospels were made for Ebbo the Archbishop of Rheims, which was one of the major sites for manuscript production at the time. 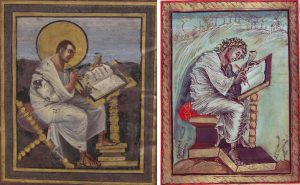 While the author portraits in the Ebbo Gospels (images of Matthew, Mark, Luke and John) are consistent with the elements of classical revival (e.g., modeling of figures to make them appear three-dimensional, gradation of the sky, the architecture and furnishings), the style in which the images of the Ebbo Gospels are executed is a notable departure. The brushwork of the author portraits can be described as energetic, expressionistic, even frenzied. The artist remains attentive to the use of highlighting and shadow to create three-dimensional forms, but does so with textured rather than smooth modeling, which creates an effect of movement.

This energy is conveyed not only in the brushwork, but also in the composition itself. In the Ebbo Gospels, Matthew is hunched over as if frantically writing on his (still blank) codex, while Matthew’s posture in the Coronation Gospels is more upright and relaxed; his pen grazes his chin, as if he is pausing in thought. 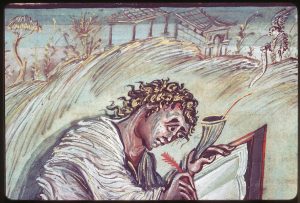 The furniture of the two portraits is very similar in appearance—though the seat in the Coronation Gospels seems to be a folding chair, while that of the Ebbo is a more-sturdy stool. However, the posture of the Coronation Matthew is stable in contrast to that of Ebbo. For example, his right foot rests on the frame of the miniature and his left is flat on the base of his book stand. This miniature is composed of several 45- and 90-degree angles that create a sense of stability and balance. In contrast, the lines in the Ebbo Gospels’ Matthew are dynamic and lack the same sense of equilibrium. For instance, Matthew’s right foot in particular is positioned on the steep, almost vertical, angle of his footrest. Furthermore the book stand is tipped at such a drastic angle that it seems his book will slide right into the viewer’s lap. The energy is also expressed in Matthew’s face, which is drawn up in a furrowed brow. While the Coronation Matthew seems to take a peaceful moment of reflection, the Ebbo Matthew appears to be in anguish over his writing (image above), which is directed by his evangelist symbol, the winged man, who instructs him from the upper right hand corner of the image.

Lastly, it should be noted that the Ebbo Gospels bear some similarities to the infamous Utrecht Psalter (above), which was also made in Rheims at the Benedictine abbey of Hautvillers around the same time (a psalter is a volume containing the Biblical Book of Psalms, often with other devotional material bound in). The images of the Utrecht Psalter are unpainted drawings in brown ink, which are also clearly meant to invoke the style of Late Antiquity. While the sketchy character of the Utrecht Psalter is not quite as dramatic as that of the Ebbo Gospels, the similarity in style can be seen especially in the classical architecture and the rendering of the winged man at the top of the evangelist’s portrait.

A Carolingian Masterpiece: the Moutier-Grandval Bible from the British Library