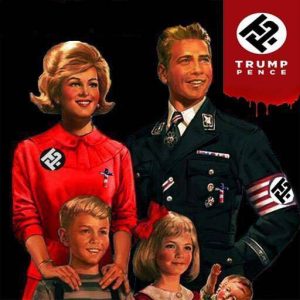 Let us begin this jeremiad with a couple, three acknowledgements: Despite the innumerable pre-mortems, the Republican Party is not dead, and despite the extraordinary spectacle of fear and loathing that low-crawled to a merciful conclusion last night in Cleveland, there always will be a place — and should always be a place — for conservatism in the America. Still, what we saw this week was nothing less than assault and battery on a political ideology by gun-hugging merchants of intolerance carried out with nary a whimper of dissent from a cowardly party establishment that has been left trampled in the gutter by a xenophobic horde marching toward an electoral cliff and into the sea behind Donald Trump.

This makes shocking images like the one above not just appropriate, but necessary. It matters not that the Republican nominee isn’t really a Nazi, merely a neo-fascist who couldn’t tell the difference between a swastika and a swizzle sticka, while the resemblance of the Trump-Pence campaign logo to a symbol so freighted with evil is surely a coincidence. Really.

But as someone who was born a mere two years after fascism was defeated at the cost of upwards of 80 million people, including relatives whom I never knew who perished on the beaches of Anzio and Iwo Jima and in the gas chambers of Auschwitz-Birkenau, whose neighbors didn’t let their kids play with me because my parents were civil rights activists who invited Negros to swim in our backyard pool, I kept experiencing flashes of nausea as I heard speaker after speaker declare this week that Trump would make America afraid again and saw talk radio hate merchant Laura Ingraham give what was easy to interpret as a Heil Hitler salute at the end of her valentine to the nominee.

That special moment had competition from another — Ted Cruz being invited to speak at the big dance and then peeing all over the carpet — which sadly relegated Melania Trump’s clinic on plagiarism to a sloppy third. 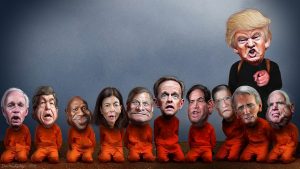 History will less remember the 2016 Republican National Convention for the coronation of the man with the small hands and peculiar hair amidst a balloon drop of dystopian gloom. It will less remember Donald Trump’s blown opportunity to prove himself to be someone other than a caricature with his specifics-free, apocalyptically self-righteous acceptance speech. It will be even less remembered for the smorgasbord of inchoate threats, the overwhelming whiteness of the delegates or whether more of them wanted to jail Hillary Clinton than kill her, let alone that Lucifer’s name seemed to have been invoked more times than the nominee’s. But it will be remembered for who stood with Trump.

The politicians who supported Red-baiting Senator Joseph McCarthy in the early 1950s have been treated with a deserved harshness by historians. Like Trump, McCarthy exploited fears through defamation and demagoguery. He eventually was censured by the Senate and died a bitter and broken man, while Trump is assured a lifetime of celebrity even if he is crushed by She Who Wears Pants Suits in November. Which he will be.

The notables who flocked to shores of Lake Erie to kiss Trump’s ring can look forward to the same sort of historic purgatory as McCarthy’s sycophants. These most conspicuously include Chris Christie, whose political career is forever poisoned, and Trump enthusiasts Dick Cheney and Donald Rumsfeld, who stayed home but already have reservations for a special place in Hell. Pat Buchanan booked their rooms.

Then there are Scott Brown, Trent Lott, Rick Santorum, Bob Dole and Dan Quayle, among other testicle-free party faithful who endorsed Trump and showed up, as well as senators who stayed home like John McCain, Rob Portman and Pat Toomey, all of whom are not coincidentally fighting for their political lives in an election in which the standard bearer will have no coattails just as the emperor had no clothes.

But Paul Ryan, the House speaker, Republican Party head honcho and convention emcee, heads the list of the shameful.

Rather unbelievably, Ryan is getting accolades for keeping the GOP together while never coming right out and endorsing Trump. Which is like keeping Nero’s fiddle in tune while not advocating the burning of Rome.

Ryan had a dilemma which if addressed nobly would have salvaged his marginal reputation in the eyes of history and would have become the stuff of momentous decision-making that recalled great statesmen like Lincoln and Churchill: Ryan could reject Trump, keep the party together and lose the election, or he could embrace Trump, lose the party’s soul and the election.

Ryan made the worst possible — which is to say most cowardly — choice as principle got mugged on the path of least resistance.

In the run-up to Cleveland, he did not see Trump’s racism as a character issue although he spoke out against racism in principle.

Nor did he see Trump’s sordid history as a scam artist as a potent issue for the Democrats. Or Trump’s view of the GOP as just another piece of real estate to be bought and sold. Trump’s addiction to crisis as political propellant. Trump’s chronic inability to distinguish fact from fantasy, his isolationist bent and man crush on Vladimir Putin, all of these character deficits as anything more than “things I don’t agree with.” That became one of Ryan’s go-to lines. The others were a word from George Bush’s rich vocabulary — he didn’t want to “dis-unify” the party — and when backed into a corner, the meek rejoinder that “No two people agree on everything.”

But Ryan surely must realize that Trump is the Republican Party’s nominee today because rank-and-file Republicans turned their anger at Barack Obama into a deep loathing for party leaders like himself who never had any intention of fulfilling their vacuous promises. 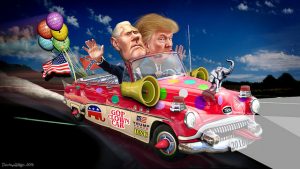 And all the while social conservatives have taken advantage of Ryan’s timidity and Trump’s ignorance to drive the Republican Party even further to the right and away from the ever growing number of voters who don’t happen to be white. Even Ted Cruz’s Texas may be on the verge of turning blue.

Cruz, of course, is the guy who kicked off his 2020 presidential campaign by hijacking the convention with a speech in which he repeatedly baited the party faithful, seeming to come thisclose to endorsing Trump but never doing so, in what must nevertheless be characterized as a rare moment of political courage.

The delegates who had not already left the hall booed Cruz lustily and encouraged by Trump himself as he pumped his fist in the backstage shadows like an evil apparition, booed louder still, drowning out Cruz’s closing words. When Cruz’s stunt appeared to have backfired by the dawn’s early light, and already being the most hated man in Washington, he said the outrage over his party pooping merely proved he was not an establishment toady. Ha!

Major damage had been inflicted on Trump well before Cruz strode to the podium. The endless series of vapid and emotionless Z-list speakers talking to empty seats assured that would be so. (Where was Clint Eastwood when his party really needed him?) If Ryan was Nero’s fiddler tuner, Cruz played Brutus to Caesar.