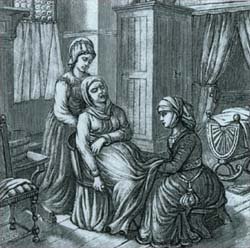 Wellcome MS. 632 may be the only surviving ‘birth girdle’ in England that was actually used during childbirth. This parchment roll survives as a rare artefact from a time when women, who could afford it, gave birth in well-furnished darkened rooms attended mostly by other women. Not only is it narrow enough to have been draped around the middle of a pregnant woman, but its battered condition and missing texts suggest that it suffered damage soon after it was made in the late 15th century.

Much of its contents are almost completely wiped away. Were they damaged during repeated use in the events surrounding labour and delivery, when the roll, according to its instructions, was laid over the womb of the woman to ease the delivery? There are a few reddish marks that could be blood stains where the roll is very worn, but laboratory work will be required to make certain. Digital photography of the roll means that it is now possible to read the manuscript better than any time since it was made. 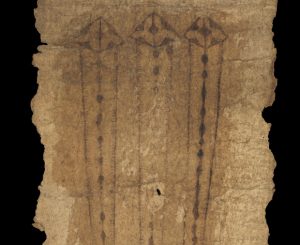 Two inscriptions on the back (‘verso’ or dorse) of the roll describe what it is and how it works. One states that the roll is a measure of ‘our lady seynt Mary lenge’ (length). That is to say, the measurement of length of the roll is proportionate to the height of the Virgin Mary, the mother of Christ. A longer legend says that the roll was written in heaven and delivered by an angel to the Pope Leo in a golden coffer. Whoever carries it and says certain prayers is protected from pestilence, death in battle, sudden death on water or land, thunder, robbery and being troubled by the devil. The carrier will not be condemned by a judge, and his or her property will increase. A woman in labour will be delivered without danger; her child will live to be baptised and she will live to be purified after the birth by the church. Surviving to the time of purification at church, usually about 40 days after delivery, released a mother from the state of sin associated with childbirth according to church doctrine. If she died before her purification, her soul was at risk of condemnation, and her body might be buried in unconsecrated ground.

The images on the front (‘obverse’ or face) of the roll depict aspects of the torture and crucifixion of Christ, events which late medieval piety venerated as promises of human salvation. Rubrics, like the red lettering found in prayer books and missals, prescribe the meaning of an image, its source and proper use, while Latin devotions and prayers, written in black ink with coloured initials, are intended for recitation. The large image of the three nails from Christ’s crucifixion, threaded with drops of blood, often served as a measure of Christ’s height, as the roll itself is said to be a measure of the Virgin Mary’s. However, the original plan of the maker or designer of the scroll seems to have been to start with the image of a cross, not nails, as a ‘measure’ of Christ. Evidently, the text was written before the image was added. The painter inserted nails, not noticing the words underneath: ‘Thys crosse if mette (measured) xv (15) tymes ys the trewe length of oure Lord’.

The rubric here says that on the day that you look upon the roll or carry it with you, no wicked spirit will have power over you, and it offers protections from all kinds of sudden death, adding that if a woman ‘in travell’ (labour) lays the image of this cross on her womb, she will be safely delivered without peril and the child will have ‘cristendome’ (be baptised) and the mother receive ‘purification’. This promise is reinforced by reference to Saints Julitta and Quiricus (both d. 304 AD), mother and son martyrs and patron saints of women facing birth. 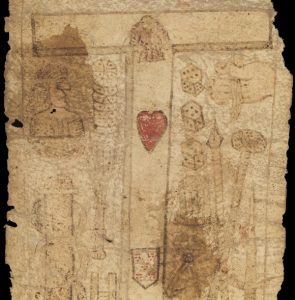 The implements and persons of Christ’s torture (‘arma christi’), deriving from the gospel narratives, are depicted behind a cross bearing a bright red heart and hung with a shield bearing the marks for the five wounds. The word ‘heart’ is the one visible word of the rubric below the image. 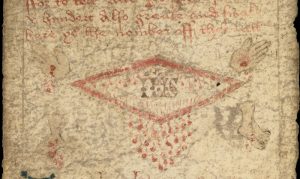 The number of drops of blood that Christ shed is commemorated in verses preceding an image of the dripping side-wound, that is to say the wound to the heart, here surrounded by the wounded hands and feet.

The nombre off the dropys off blood off Jhesu all
I wyll reherce in generall
v (five) hundart thousand for to tell
and xlvij (47)* thousande well
v (five) hundert also greate and small
here ys the nomber off them all. 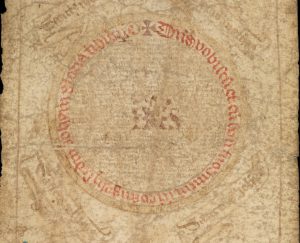 MS. 632 displays a special veneration of Christ’s name, written in the form of the holy monogram, IHS XP, the Greek abbreviation for Jesus Christ. After the long incantatory prayers of the holy names of Christ in Hebrew, Greek and Latin, spaced between red crosses to indicate that the reciter of the names should make the sign of the cross, the holy initials appear on a circular image, reminiscent of a wax seal, as if it were the seal of Christ. 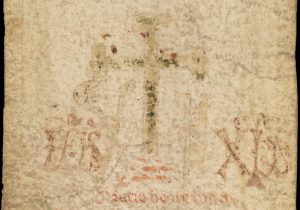 The initials also form the centre of the side-wound image (see above), and they appear greatly enlarged on either side of a much rubbed away green cross or crucifix. It is impossible to tell whether they also appear in the last image, because it is almost completely worn away, but it seems to show a bleeding Christ framed in banderoles containing now invisible words of comfort and protection.

This battered scroll strengthened the pious woman facing the dangers and anxieties of giving birth, who with her companions contemplated the images of Christ’s suffering and recited the prayers, now hardly legible, in honour of the wounds, the Virgin Mary and the Name of Jesus. Her soul was fortified by meditative spiritual exercises, and having the roll placed on or near her body protected her and her child, as it would a soldier or sea voyager who carried it, from death. Yet such protective rolls had become rare within but a few decades after MS. 632 was made, when their use, like pilgrimages to saints’ shrines and the veneration of relics, was denounced as superstitious. These rolls were systematically collected and destroyed by religious reformers. Fortunately, this particular artefact survived, eventually falling into the hands of the 19th century book collector John Edward Gilmore of Bray and, after his death in 1906, entering the collection of Sir Henry Wellcome, which later became the Wellcome Library.

Author: Professor Lea Olsan formerly taught medieval literature at the University of Louisiana at Monroe; she resides in Cambridge, UK. Her research interests include the role that prayers and charms play in medieval medicine and healing.