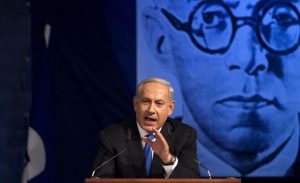 Netanyahu shadowed by his idol, Zeev Jabotinksy, founder of the Revisionist movement

A few days ago, an Israeli researcher working on behalf of faculty members from the University of Sciences Po, asked me if I could help authenticate an Al Hamishmar newspaper article which I featured in a 2011 post.  The article quoted Bibi Netanyahu espousing, clearly and definitively, his support for ethnic cleansing.  He delivered these remarks in a November 1989 speech which Maariv, the Jerusalem Post and Al HaMishmar quoted in their reports:

“Israel should have exploited China’s suppression of the demonstrations [Tienanmen Square], at a time when the world’s attention was devoted to events in that country, in order to conduct mass expulsions of the Arabs [sic] of the Occupied Territories. However, to my sorrow, they [government ministers] didn’t support the policy I espoused and whose implementation I continue to recommend.”

A reader notified me of this speech back in 2011 and provided a link to the Cosmos website which documents historical archival material related to the Israel-Palestine conflict.  But the reference there mentioned the Al HaMishmar article, written by Yaakov Lazar, was published on November 28 1989.  That was stymieing those trying to authenticate the report, since the newspaper supplement in which it was originally published, Hotam, was only published on Fridays (November 28th wasn’t a Friday). 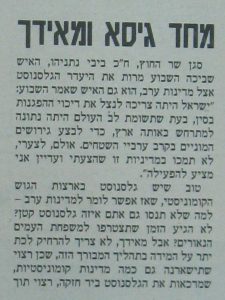 Lo and behold, an Israeli who is a highly trusted researcher, discovered another reference to the speech from Al Jazeera, which wrote this about it:

As deputy foreign minister in 1989, speaking to students at Tel Aviv’s Bar Ilan University in Israel…said…

This offered us further documentation about the provenance of Bibi’s speech which we hadn’t known (that it was delivered at Bar Ilan University).  And it offered a new publication date: November 24, 1989. Bingo!

Nailing down the source fully, our Israeli friend discovered another reference in the 1989 Knesset plenum, in which Netanyahu was taken to task for his racist remarks by an Israeli-Palestinian MK.  Here is the translation of a portion of MK Tawfik Toubi’s speech:

“…Teachers warn us to be careful of what lies hidden behind the words of the “diplomat,” deputy foreign minister Benjamin Netanyahu, when he’s invited to speak about peace.  On November 16th, he appeared before the students of Bar Ilan University at a political conference.  There he said the following [see quotation above].

This racist, dangerous speech was reported on November 17th in Maariv and November 19th in the Jerusalem Post.  According to the latter, the deputy minister said more–that should’ve expelled 5, 50 or 500 “inciters” when it was offered several opportunities to do so since the beginning of the [first] Intifada.  As the Post reported, its editorial staff has a recording of the speech.  Therefore denials of the deputy minister’s spokesperson, Eyal Arad–who claimed that his boss’ words weren’t reported precisely and that he [Netanyahu] was speaking about the nine Palestinians whom the defense minister ordered expelled–will be ineffective.

The deputy minister’s call for the mass expulsion of the Arab-Palestinian people from its homeland is not an isolated phenomenon or a new one.  This call for expulsion has been heard in the past at various times.  There were ministers who advised the Arabs to leave Israel in taxis via open border crossings before there is a more comprehensive expulsion.  There have been prior calls to exploit events in order to bring about a mass expulsion.  There have been racist calls for mass “transfer.”

The truth is that there haven’t been just calls for expulsion.  During various periods there have been actual expulsions.  There were mass expulsions during the 1948 War.  There were expulsions during the June [1967] War.  The truth is that the expulsions never ceased.  In the course of 22 years [1967-1989] the Occupation expelled thousands of residents of the West Bank and Gaza from their homeland.  In Gaza, thousands were uprooted in the course of Minister Sharon’s [military] operations.  Tens of thousands were expelled from the West Bank in the months after June 1967.  Up to this day the expulsions continue.  I’m not talking about just a few hundred citizens.  Members of the Palestinian community are expelled regularly, without effect, in order to restrain the Palestinian people from its just struggle for independence and peace…

Along with the condemnation we demand from this Knesset regarding the words of the deputy minister and his preaching in favor of the expulsion of a people from its homeland, we say with full conviction: This is no longer 1948, nor June 1967.  More than ever in the past, the Palestinian people is holds fast–learning from historical experience–with its very fingernails to its land.  No terror, oppression and expulsion will remove it from its homeland.

In his response, Netanyahu attempted to conflate his comments about the nine individual terror suspects who’d been expelled, to say that he was not speaking about mass expulsions, but of selected expulsions of individuals.  Of course, Bibi never denied the authenticity of the quotation attributed to him above.  And this quote rings clear as a bell.  Nor is the sound that of the ‘chimes of freedom,’ as in the resounding Dylan song.  But rather the clanging dirge of mass expulsion and ethnic cleansing.

I used the November 19th date for publication of the Jerusalem Post article to find it online as well.  The article, written by Menachem Shalev, reads:

Deputy Foreign Minister Binyamin Netanyahu has called for Israel to exploit political opportunities in order to expel large numbers of Palestinians from the territories. Netanyahu made the remark in a speech to Bar-Ilan University students on Thursday. In a tape recording of a portion of Netanyahu’s address obtained by The Jerusalem Post last night, the deputy foreign minister clearly states that “five, 50 or 500” inciters should have been expelled at various times since the start of the intifada.

Netanyahu told the students that the government had failed to exploit politically favourable situations in order to carry out “large-scale” expulsions at times when “the damage would have been relatively small.”

“I still believe that there are opportunities to expel many people,” Netanyahu said.

Those of us who care about Israeli history, who care what politicians say and believe they should be held accountable–we know Netanyahu.  As Jeremiah (who was much wiser than any Israeli politician) told us, the leopard doesn’t change its spots.  The Netanyahu of 1989 is the same Netanyahu of 2016.  For anyone, whether he be John Kerry, Barack Obama, Hillary Clinton or even Bernie Sanders to mistake Israel’s prime minister for a man who can change his convictions, for someone who can become a Man of Peace–is laboring under a fatal delusion.

Remember, this is the same demagogue who only six years later stood on a Jerusalem balcony and told a crowd ravening for the blood of Yitzhak Rabin that they were dead-right and should not stop baying for blood till they got it.  Within weeks, they did get his blood and his life, as one of Netanyahu’s admirers murdered Rabin, and thus murdered peace and hope.

Before readers begin to crank up their keyboards to dispute my portrait of Rabin, I am not a devotee.  I understand Rabin’s limits.  And perhaps he would’ve failed.  But at that historical moment, he offered something Israel hasn’t seen since and may never see again.

Returning to Netanyahu, he is the opposite of peace: he is the death of peace.  I would go even farther and say that the longer he rules the closer the current iteration of the State of Israel will come to its own demise.  As the Herut anthem goes: “by fire and blood did Judea fall and by fire and blood shall it rise again.”  Strike the second half of that phrase.  It is the first half that is telling.  Netanyahu offers Israel unending blood and fire.  The blood flows not in rivers at first, but rivulets.  The fire isn’t a conflagration at first.  It only burns a Palestinian baby and father and mother.

But we know how this ends: not well, as the anthem warns.  The question for the world is can we afford a Judea that brings nothing but blood and fire to the region and the world?  If not, what is the world prepared to do to end it?