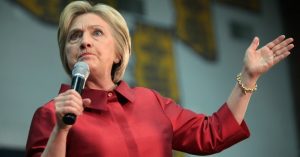 If, sad to ponder, the presidential election comes down to Hillary Clinton vs. a Republican, we’ll be left either way with a business-friendly neocon White House. Given Hillary’s past deceits and reversals, it’s easy to see why she doesn’t inspire trust among the American people.

“I won’t let anyone take us backward, deny our economy the benefits of harnessing a clean energy future, or force our children to endure the catastrophe that would result from unchecked climate change.” —Hillary Clinton, 11/29/15

Greenpeace estimates that the Clinton campaign has taken $4.5 million from fossil fuel lobbyists and donors, and Naomi Klein and Grist have reported on all the money received from ExxonMobil and ConocoPhillips and other oil sources. In response, Hillary explained, rather incoherently, “I have money from people who work for fossil fuel companies. I am so sick of the Sanders campaign lying about me.”

“Is there really any argument that America must remain a preeminent leader for peace and freedom..?” —Hillary Clinton, 10/31/06

Dr. Jeffrey Sachs, an advisor to the United Nations, called Hillary “the candidate of the War Machine.” In her book, “Hillary’s Choice,” author Gail Sheehy claimed it was Hillary who encouraged the president to bomb Kosovo. Then, as Secretary of State in 2011, she strongly supported war in Libya, a country which today is overwhelmed with crime and joblessness and a lack of basic necessities. She backed the escalation of the Afghanistan war, and in 2012, according to Sachs, she was largely responsible for the obstruction of peace efforts in Syria.

Go after their money, that is. In the two years before starting her presidential campaign, Hillary was paid over $4 million in speaking fees from the big financial institutions. As summarized by Maryland Governor Martin O’Malley, “Her closeness with big banks on Wall Street is sincere, it’s heart-felt, long-established and well known.”

Attendees at Hillary’s Wall St. speeches referred to her as warm and “gushy” toward her audience, sounding “like a Goldman Sachs managing director,” effectively telling them “We’re all in this together.” She refuses to release the transcripts of her speeches to the big banks, saying, in a pout, she’ll do it “when everyone else does.”

“We have to end the flood of secret, unaccountable money that is distorting our elections….You’re not going to find anybody more committed to aggressive campaign finance reform than me.” —Hillary Clinton, 09/08/15 and 02/09/16

But the Center for Public Integrity and the Political Insider both describe a Clinton campaign and foundation that are accumulating cash from Super PACs, foreign governments, and lobbyists.

Hillary was FOR, then AGAINST, and then either FOR OR AGAINST the Trans-Pacific Partnership (TPP). According to one account, she has “a long record of verbally criticizing free-trade agreements, but then supporting them when in office.”

“If you invest in your workers and in America’s future, then we’ll stand with you.” —Hillary Clinton, 03/01/16

Campaign finance records show that a member of the Walton family donated over $350,000 to the Clinton “Victory Fund.” Hillary, a former member of the Walmart Board of Directors, has refused to publicly criticize the company, which pays its workers so little that U.S. taxpayers have to subsidize them with over $6 billion in food stamps and other safety net funding.

“Black lives matter. Everyone in this country should stand firmly behind that.” —Hillary Clinton, 07/20/15

Michelle Alexander notes that Hillary called black kids “super-predators” who needed to be brought “to heel,” like dogs. To do this, she supported her husband’s 1994 crime bill, which was so severe that food stamps were denied to anyone convicted of a felony drug offense, and public housing was disallowed — at the risk of eviction for entire families — for anyone with even an arrest.

“I have spent a very long time, my entire adult life, looking for ways to even the odds, to help people have a chance to get ahead.” —Hillary Clinton, 10/13/15

Hillary actively advocated for her husband’s 1996 “welfare reform” legislation, calling the recipients of Aid to Families with Dependent Children (AFDC) “deadbeats,” and despite a doubling of extreme poverty calling the program a success as recently as 2008.

“We should ban discrimination against LGBT Americans and their families so they can live, learn, marry, and work just like everybody else.” —Hillary Clinton, 06/13/15

According to The Atlantic, before 2013, “she earnestly believed that marriage equality should be denied to gays and lesbians. In 2004 she said, “I believe marriage is not just a bond but a sacred bond between a man and a woman.”

“We can go after some of these schemes…misclassifying of income…routing income through the Bahamas or the Cayman Islands or wherever.” —Hillary Clinton, January, 2016

The New York Post reports that “the Clintons’ family wealth has grown big-time thanks to firms with significant holdings in places like the Caymans.” Husband Bill has made millions from his partnership with a fund registered in the Cayman Islands. The Clintons also dodged estate taxes (which they support for other wealthy people) by putting their New York home in a residence trust.

“We need to make a quality education affordable and available to everyone willing to work for it, without saddling them with decades of debt.” —Hillary Clinton, 08/10/15

The National Review points out that Clinton has routinely charged universities $200,000 — annual tuition for 8 students — for 30-minute appearances.

This was in response to her email controversy, using a private server to conduct official business. Just four days later, her attorney announced that she had deleted all the emails on that server.

As noted by John Atcheson, “She only sponsored 3 Bills that became law during her 8 year tenure. One established an historic site in New York, another renamed a Post Office, and the third named a portion of a highway in New York after Timothy J. Russert.”