Being armed with facts isn’t always enough – bureaucracy and red tape often stand in the way.

When my article about the US Navy’s 1854 razing of the Central American port of Greytown was published in a peer-reviewed journal last year, the editor added the title “Independent Scholar” under my name. I guessed this was the go-to fall back for a non-academic with nothing more than a BA in philosophy.

Once the piece was up I embarked on a quest to both parlay it into a book contract and get the federal government to use it to correct its official explanation of why Greytown was destroyed. These twin pursuits were joined at the hip: If I could get the official description corrected, I would have literally rewritten history, which, in turn, would make it easier for a publishing company to envision a star-burst blurb to that effect on the cover of its next best seller.

Since 1945 the official list of US military interventions has attributed Greytown’s utter destruction to the nation’s need “to avenge an insult to the American Minister to Nicaragua.” (No residents were killed in the bombardment and burning, as they had time to flee.) The insult occurred when an angry town resident threw a piece of broken bottle at the diplomat, which slightly scratched his face. The resident was motivated by the envoy’s earlier interference with Greytown’s sheriffs when they tried to arrest an American steamboat captain for the cold-blooded murder of a black river pilot. The diplomat — who had witnessed the murder — prevented the arrest by leveling a rifle at the sheriffs and saying they had no authority recognized by the United States to arrest an American citizen, which was untrue.

My article proves the insult was a pretext and that, actually, two groups of American businessmen bent on taking over Greytown, an independent city-state, inveigled Washington into destroying it. One group ran the isthmian steamboat company and wanted to own the port, their Atlantic terminus. The second group (for a time, associated with the first) wanted Greytown as the prospective capital of a new colony based on a huge, dubious Mosquito Coast land grant they owned. This is how the New York Tribune of 28 July 1854 captured the essence of these twin intrigues: “That [steamboat] company [had] long desired to get rid of the town, which … was a hindrance to their supremacy and had defied their power. [The town] also stood in the way of a great project for the establishment of a colony … which is entertained by several speculators…. The town being removed, it is supposed that project may be carried out with greater facility.”

Until now, these plots against the tiny, defenseless port have remained largely hidden for over 100 years.

Besides the “lost history” appeal of a book on this subject, there is also the perennially important legal case it gave rise to, Durand v. Hollins. This case law has been used ever since to sanction American military interventions undertaken without seeking the prior congressional approval required by the Constitution’s provision that only Congress can declare war. (Googling the exact case name will yield between 800 and 1,000 hits. Some of these will be about Durand as the forerunner to the Authorization for Use of Military Force, or “AUMF”, laws, which approved the invasions of Afghanistan and Iraq.)

“It’s a marvelous piece of detective work,” Princeton history professor Matt Karp told me after reading my article, “and perhaps the definitive account of the incident. I really had no idea how important Greytown was as a precedent for executive action … [and] that much of the legal precedent and justification for current US foreign policy is based on a giant error of fact, surrounding a 160 year old bit of gunboat diplomacy.”

Since about 2000, a federal agency called the Congressional Research Service (CRS) has annually updated the interventions list (officially called “Instances of Use of United States Armed Forces Abroad.”) So I knew it was to the CRS I must turn to get the record corrected. Trouble is, I couldn’t approach them, at least not directly. The CRS doesn’t respond to requests from the public, only from members of Congress or their staffers. So, I wrote my congressman, Adam Schiff (D-CA), and his local office staffers forwarded my article to the CRS and asked for a report back.

“Good idea contacting … House staffers,” renowned constitutional scholar Louis Fisher told me. “Getting CRS to correct its error is a big and important step.” Fisher, who worked for the CRS for 36 years as their “separation-of-powers” expert, viewed Durand with an eye both gimleted and jaundiced, given the case law’s long-time use by executive branch lawyers to bypass Congress when presidents are bent on unilateral military interventions.

In 2014, Fisher used an amicus brief to urge the Supreme Court in a “separation” case to correct a precedent being applied there. I think he was itching to file another amicus brief. “Please send me a link to the CRS report [when issued],” he emailed me, “so I can see how [they handle it].” If the CRS agreed with my paper and corrected the erroneous description of why Greytown was destroyed, I would have literally rewritten history and Fisher could have used that correction to challenge the factual basis of Durand and ask the Supreme Court to abrogate it. Not only is Durand still taught in law schools and still cited in intervention apologia, but if it remains unchallenged and the AUMF laws are ever repealed or sunsetted, West Wing attorneys could just fall back on it. 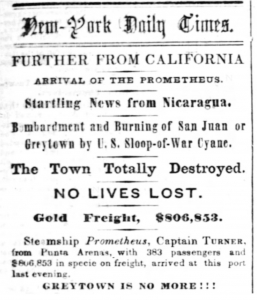 Well, I’ll have to wait a while longer to rewrite history and Lou Fisher, to rewrite foreign policy jurisprudence. In mid-September Schiff’s office got the report from CRS on my challenge to the insult-avenging explanation of Greytown’s demise: “Regarding constituent Will Soper’s claim that the [Greytown] entry … in [the CRS “Instances” Report] is factually incorrect, please refer to the following sources referenced below that substantiates [sic] this entry.” What followed were three random quotes, two from credible historians but basically parroting the official line. The third was from a less-than-neutral observer, President Franklin Pierce himself (who, early on at least, was involved in one of the plots against the port). In his defense of its razing — not quoted in the report — he called Greytown a “pretended community … composed for the most part of blacks and persons of mixed blood … too dangerous to be disregarded and too guilty to pass unpunished … a piratical resort of outlaws or a camp of savages.”

The report’s author is the CRS’s Information Research Specialist (Foreign Affairs, Defense, and Trade Division) Barbara Salazar Torreon. She not only didn’t address the evidence in my paper, she didn’t even mention the paper itself.

My tax dollars at work — and yours.