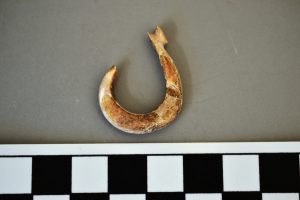 The Nicoleños, an Indigenous group that lived on San Nicolas Island, used a multistep process to fashion striking abalone-shell fishhooks such as this one. / Photo by Kevin Smith

San Nicolas Island was home to Indigenous populations as early as 6,000 years ago.

San Nicolas Island, the most remote and one of the smallest of California’s Channel Islands, is more than 60 miles from the mainland. The seas around the island are frequently rough and stormy, but they’re rich in underwater life thanks to kelp beds and rocky reefs that support thriving fish populations. Despite its remote location, San Nicolas Island was home to Indigenous populations as early as 6,000 years ago.

A technologically advanced group, the Nicoleños—the primary Indigenous community that populated the island—were able to navigate the difficult waters surrounding San Nicolas to fish and hunt in the local reef environments. One tool in their toolkit, distinctive fishhooks crafted from a single piece of abalone shell, has been of particular interest to Kevin Smith, a graduate student in archaeology at the University of California, Davis.

Fishhooks found at archaeological sites on San Nicolas appeared along with the bones of large fish and seemed to be an essential part of the inhabitants’ material culture. But exactly how they were made remained a mystery. In scanning the hundreds of hooks the Nicoleños crafted, Smith wondered if he could find the answer by re-creating the objects himself.

Smith started his experiment at the archaeological site of Tule Creek Village, near the northernmost point of San Nicolas Island. Groups of complete, unfinished, and broken fishhooks have been found at the site in combination with stone objects that he suspected were tools used to manufacture the hooks. What intrigued him the most were the unfinished hooks—they held clues about what intermediate stages of the manufacturing process should look like.

In choosing local stones to work with, Smith planned to study the trace marks of these possible tools on abalone shells and vice versa. The stone objects found at the archaeological site were interpreted as “saws,” “reamers,” and “smoothers,” and each category had a different form and function. Smith hoped to match his experimental trace marks to those visible on the archaeological shells and on the objects he identified as stone tools. If he achieved his goal, it would mean that he had likely found a step in the hook-making process.

The first stone tools Smith tested were “saws,” blades of tough local sandstone found in large quantities along with the shell hooks. He made samples of these tools using the same type of stone, and then he abraded and cut various test materials, including wood, bone, and shell. The thick shell of abalone produces a fine, lung-clogging dust when abraded, and this discomfort led Smith to a serendipitous discovery.

Smith wet his sandstone saw blade in an attempt to keep the dust from getting airborne. “That was a cool moment,” he says. “When my team and I saw the residue pattern of the wet shell dust on the blade, we were like … ‘holy shit—it’s exactly the same pattern as on the Tule Creek Village saws!’” Smith confirmed the match with chemical residue analyses. The traces on the archaeological stone saws were indeed from abalone shell. He had unlocked the first step for making the shell hooks.

Using this experimental approach, Smith re-created and tested each type of stone object that was excavated alongside dozens of archaeological fishhooks. After several months of research, he was able to reconstruct the multistage process for creating abalone fishhooks using several distinct tools. 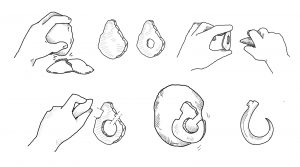 This illustration shows several of the steps in archaeologist Kevin Smith’s process for creating a shell fishhook out of abalone. / Illustration by Anna Goldfield

2. Find a piece of satisfactory size and chip at it with a stone hammer on a stone anvil to produce a teardrop-shaped blank.

3. Grind away the exterior of the shell with a sandstone abrader, leaving the tough nacre (mother-of-pearl), the iridescent, resilient coating on the shell’s interior.

4. Shape a piece of local stone into a sharp-tipped pecking tool.

5. Use the pecking tool to chip a hollow into the center of the shell blank from both sides, until the shell is perforated.

6. Use a small piece of hard local ground stone with a conical tip (a “reamer”) to widen the initial hole.

7. Use the sandstone saw to incise notches on the sides of the shell blank to form the hook shape.

8. Smooth and sharpen the finished hook shape, also with the sandstone saw.

During his quest to figure out how the Nicoleños created the fishhooks, Smith noted that the archaeological fishhooks at Tule Creek Village appeared in clusters that included finished hooks, unfinished blanks, and pieces that had evidently broken partway through the manufacturing process. This arrangement of artifacts likely indicates that the island’s inhabitants had designated workshops for crafting these tools.

In light of the complex, multistep process required to make fishhooks, these manufacturing areas are an important indicator of the distribution of labor in the Nicoleño community: They show that certain individuals—specialists—devoted time and labor to the creation of important objects, while their needs for food and other resources were fulfilled by other members of the community. The evidence for specialized toolmaking is a window into the economic structure of early Nicoleño populations.

Through his experiments, Smith was also able to prove that while the islanders were part of a well-connected trade network, fishhook production on San Nicolas Island was totally local—an important factor given the island’s remote location and often-challenging ocean conditions. Trade would have been impossible at times due to rough seas, so it was important that the San Nicolas Island population was able to independently manufacture one of their most important food-gathering tools.

Smith’s work demonstrates the value of experimental replication in approaching archaeological hypotheses. “Actually working with the local material, staying true to what was available to these people, is a really valuable way to test what we think they were doing,” Smith says. “Reproducing technology under field conditions means that we can get at a range of solutions, not just one answer—and then we can try to narrow that range down as we learn more about the materials.”

Artifacts and historical accounts are all that remain of the populations that once called San Nicolas home. With the help of experimental archaeology, those artifacts can fill in large parts of the picture of the day-to-day life of the Nicoleños and add richness to their story.