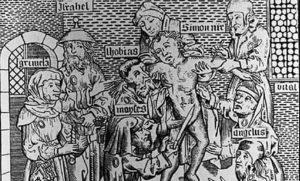 Simon of Trent (1472 – March 21, 1475) was a Christian boy from the city of Trento, Italy whose disappearance was blamed on the leaders of the city’s Jewish community. Their confessions were obtained under torture and were followed by their execution. The event caused a major blood libel across Europe. / Public Domain

How to gain genuine insights into the life and preoccupations of the communities that produced and used them. 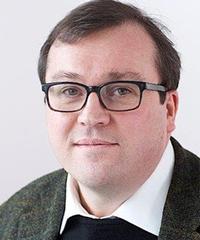 A natural starting point for any attempt to know a past society is its histories—the texts with which its members recorded what had happened and was happening in their world. Many precious witnesses of this kind have survived from medieval Europe, but they are not easily used to answer the questions that modern historians would like to ask.

In essence, three types of historical writing flourished in the Middle Ages: chronicles, hagiography, and the rhetorical monograph. The first category refers to seemingly simple lists of events or, to use the current jargon, “factoids.” These texts usually arrange their factoids in some sort of chronological order; many assign them to the anni, or years, in which they took place, for which reason they are often called “annals.” The second type comprises records of things that God has done in this world, through the grace that he has bestowed on his saints and their devotees. The third category refers to narratives that celebrate or criticize the acts of rulers, dynasties, or communities.

All three types clash with modern ways of thinking. Hagiographical texts baffle, because they are the most overtly empiricist and yet, it often seems, the most unreliable. They ask us to believe that God was an active presence in the life of a certain saint and his or her people, that whenever he or she requested divine help he provided diverse wonders, extending from food and water in times of need to the resurrection of the dead. They ask their readers to accept as absolute fact events that most of us find implausible.

Chronicles favor the mundane, but many incorporate miracle stories, and they typically lack two qualities that modern readers require of a proper historical text: “narrativity” and a metahistorical voice. That is, their authors fail to guide their readers with comments that point them toward a particular interpretation—they fail to connect events in ways that tell stories and explain how one gave rise to the next. The third type, on the other hand, has these “missing” elements in excess.

Rhetorical histories like Luidprand of Cremona’s Antapodosis or “Tit-for-Tat” (ca. 950), or the history of Norman Sicily attributed to “Hugo Falcandus” (ca. 1175?) are full of reflexive comments. Their authors are continually telling their audiences how to read their narratives. They often reveal immense learning and a degree of critical intelligence, but they rarely use these faculties for serious research. They favour fantasy, gossip, and slander. These texts are fact-light but spin-heavy. Thus, whereas the chronicles are often derided for being stupid and random, the rhetorical histories are slammed for being biased and deceitful.

Some scholars would like to see the rhetorical histories as a more ad­­vanced type, to ar­gue that the form evol­ved out of the chronicle and that it represents a step toward the modern historical monograph; but it is difficult to construe dishonesty as “pro­gress,” and in any case, all three types thrived simultaneously. The saints’ life and the chronicle did not give way to the monograph—not in the Middle Ages, at any rate. There are examples, indeed, of leading intellectuals who worked in all three modes. William of Malmesbury (d. 1143?), for example, wrote three rhetorical histories, five saints’ lives, and at least two sets of annals.

One might wish for better sources, but these are the sorts of history that the medieval world produced, and making them work for us presents a stimulating challenge. If we are to make sound use of them, we need to grasp the cultural systems and practices that governed their production and consumption. We cannot escape the need to look for nuggets of fact, but recognizing them and utilizing them to good effect re­quires sensitivity to the criteria by which medieval authors selected and adapted them for inclusion in their histories.

Many scholars now recognize, however, that the writing of a historical text is itself an event, one that can be perceived with greater certainty than those that have traditionally occupied the attention of historians—the many “mainstream” phenomena known only at considerable remove, as refracted through the distorting lenses of the texts. By investigating these texts as acts of scholarship and as oratory or propaganda we can gain genuine insights into the life and preoccupations of the communities that produced and used them.

This is especially true when the authors’ working practices can be reconstructed in detail. For this purpose, it is sometimes the earlier sections of the texts—those that cover periods remote from their authors’ own time—that reveal the most, in part because it was frequently risky to write explicitly about the present, but also because it is often possible to tell exactly what material was available for the researching of these sections and how the author has adapted it to suit his purposes. Thus, contrary to expectations, it is sometimes what eleventh- or twelfth-century historians report about the ancient and early medieval worlds rather than their own time that reveals most about their methods and concerns. 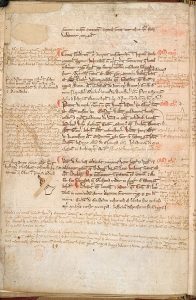 A leaf from the Later Winchcombe Annals (London, British Library, MS Cotton Faustina B.I, fol. 23v). The layout of these annals—the wide margins that have been left for the insertion of alternative versions of the items listed in the central panel— suggests that this is a working draft. Yet, the presence of decoration—of highlights, rubricated initials, and illustrations—implies that this copy and its many contradictions were meant to endure unresolved. / British Library

The possibility of achieving sound results with this sort of inquiry has advanced greatly in recent decades as scholars have discovered and published many texts that were previously unavailable (or at best only in incomplete editions), as they have defined and traced the contents of particular medieval libraries, and with the creation of vast digital databases that allow us to identify what sources were being used. Access to a powerful array of such tools is just one of the advantages that Princeton University and the Institute for Advanced Study offer to scholars working in this area.

For the past decade, I have been studying various histories produced in the eleventh and twelfth centuries with a view to comprehending the full range of historical practice in this period. The subject of my present project at IAS is a set of chronicles, drawn from many parts of Europe, which are united by an interest in a particular topic: how the first eighty or so popes created the institutions of the Church, especially its liturgy. The emergence of this theme offers telling insights into the processes that governed the composition of this type of history.

The chroniclers’ interest in the topic cannot be explained by postulating a single text on which all the others depend or as a function of the operation of a cultural framework or mentalité. To be sure, some shared habits of mind and sources of material were involved. As clergymen or monks, all the authors had vocational reasons for being interested in the origins of the Church. All of them took data from a collection of papal biographies known as the Liber pontificalis and from a book of ecclesiastical law known as the “False Decretals of Pseudo-Isidore.” But these sources had long been available: the former had been circulating since the sixth century, the latter since the ninth. Why then is it only from the late eleventh that the compilers of this type of history begin to research this theme, and why in so many different places at the same time?

Part of the explanation lies in the immense impact of the papal reform movement, yet not all of these chroniclers sympathized with this cause. Rather, many were induced to take a serious interest in the papacy’s role in the early history of the Church by works about the liturgy and canon law that were produced in the 1090s by adherents of the movement. These works may not have won many converts among our chroniclers, but they appear to have inspired them to research this topic for the sake of their projects. The implication is that the processes in­volved in constructing this type of history, far from being “stupid and random,” could instead be sophisticated and purposeful.