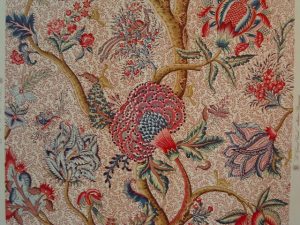 French “Indienne”, “Le Grand Corail”, a printed or painted textile in the manner of Indian productions, which used mordants to fix the dyes.  Photographed at the Musée du textile de Wesserling, Alsace, France by Rémi Stosskopf.  Image released
to the public domain.

[A] young Frenchman, Antoine de Beaulieu, an employee of the French Compagnie des Indes had committed industrial espionage to learn the secrets of Indian dyeing techniques.  He discovered the Indians used metallic salts, called mordants, that, when combined with dyes, formed an insoluble compound on natural fibers making textiles both colorful and colorfast.

The article mentioned that the use of mordants was known in the Mediterranean world (and apparently India) in ancient times but had been lost to Europe for centuries.  Naturally, this made me curious to learn more about it.

Many of us who study ancient history have read about the production of the highly valued purple dye from snail shells and how it was sought after for imperial robes and senatorial toga stripes.  But I hadn’t really considered what had to be done to make such colorful garments colorfast.  Considering fullers’ use of strong chemical baths incorporating urine, colorfastness of dyed fabrics had to have been important. 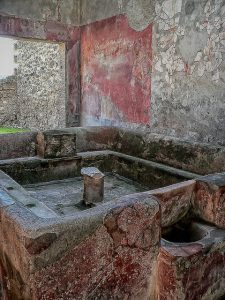 So, I began my research into the history of mordants (sometimes spelled mordents).  I discovered that some of the ancient recipes for mordants were found in a stash of papyri recovered in 1828 (presumably by grave robbers) from burial sites near Thebes in central Egypt.  The scrolls, tentatively dated to the late 3rd or early 4th century CE (Greco-Roman Period), were written in Greek.  The sheets of papyri were in excellent condition, probably originally placed in sealed containers as part of a funerary offering gift for use in the afterlife.

Initially, the recipes were thought to be “alchemical” in nature – recipes used for the magical transformation of metals.  A portion of the original sheets were sent to the Museum of Antiquities at the University of Leyden in 1929 and the balance were shipped off to the Swedish Royal Academy of Antiquities in 1932.  Since the papers at the University of Leyden had been catalogued as alchemical, they did not draw much attention from chemical historians until the papyri were finally translated into Latin in 1885.  The papyri at the Swedish Royal Academy of Antiquities languished until they were finally translated in 1913 and associated with the Leyden scrolls by Austrian chemist and historian Edmund von Lippmann.  In 1924, Englishman John Maxson Stillman published “Story of Early Chemistry” combining informaton from both sets of documents.  This text remains one of the most widely studied books on classical chemistry.

“As a reading of these translations quickly reveals, neither papyrus contains the mystical symbolism and allegorical indirection so typical of the true alchemical literature. Rather they consist largely of simple, short recipes. In the case of the Leyden papyrus these focus primarily on the preparation of various metal alloys – many of which are intended to imitate the appearance of either gold or silver – for use in making jewelry, in gilding, or in metallic writing, while a few others deal instead with dyes of various sorts. The contents of the Stockholm papyrus have the same form, but focus more on dyeing and the imitation of various precious stones and gems. ” – William Jensen, The Leyden and Stockholm papyri: Greco-Egyptian chemical documents from the early 4th century AD

As it turns out, though, these papyri aren’t the oldest references to dyeing and the imitation of gemstones, either.  In 1925 British Assyriologist R. Campbell Thompson and German Assyriologist H. Zimmern each independently published translations of several cuneiform tablets dating from the 7th century BCE containing practical recipes for the preparation of colored glasses. 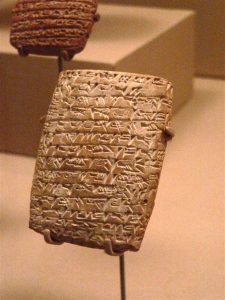 We also have a reference in Pliny the Elder’s Naturalis historiae, written two centuries before the Leyden and Stocklholm papyri, describing the commercial production of counterfeit gems and precious stones using dyes in the 1st century CE:

“Nay, even more than this, there are books in existence, the authors of which I forbear to name, which give instructions how to stain crystal in such a way as to imitate smaragdus and other transparent stones, how to make sardonyx of sarda, and other gems in a similar manner. Indeed, there is no other kind of fraud practiced by which larger profits are made.” – Pliny the Elder, Naturalis historiae

But, Pliny was most amazed by Egyptian dyeing processes that used mordants to obtain color variations in textiles using the same dye solution:

“In Egypt garments are dyed according to a remarkable process. They are first cleaned, then soaked, not in dye, but in various substances that absorb dye. These substances do not at first show in the materials, but when the materials have been dipped into the dyeing tun, they can be removed, after being stirred about, completely dyed. The most wonderful thing about this is that, although the tun contains only one kind of dye, the materials suddenly appear dyed different colors, according to the nature of the dye-absorbing substances used, and these colors are not only resistant to washing, but materials so dyed actually wear better.” – Pliny the Elder, Naturalis historiae 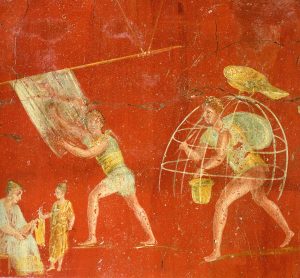 A fresco from the Fullonica of  Verania Hypsaeus in Pompeii
depicting the cleaning of fabric 1st century CE.

Unfortunately, counterfeiting gems must have been a relatively successful and problematic activity across the Roman Empire because the emperor Diocletian issued an edict  around 290 CE ordering the destruction of all documents relating to the manufacture and imitation of gold and silver to prevent the debasement of currency and the funding of insurrections.  This information was included in the same compendiums as the use of mordants and dyes in the textile industry.  So these valuable processes were lost to the west in what must have become a Roman book burning.

So, what did the ancients use to produce these marvelous results?  According to William B. Jensen of the University of Cincinnati,  105 materials of mineral origin, 88 of plant origin, and 16 of animal origin were included in recipes contained in The Leyden and Stockholm Papyri. Among the most frequently cited in the mineral category are alum, copper, crystal, and gold (though often as a color rather than as a material), whereas alkanet, archil and especially vinegar are the winners in the plant category, and urine and wool in the animal category.

If you’re into recreation of textiles processed with these ancient methods, the recipes are available in English in “The Leyden and Stockholm Papyri: Greco-Egyptian Chemical Documents From the early 4th Century AD” by William B. Jensen.

The Fabric of India exhibit will be on display from October 3, 2015 – January 10, 2016 at the Victoria and Albert Museum in London.