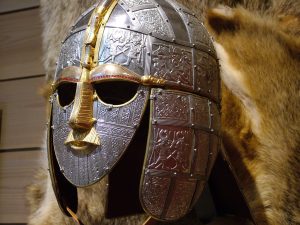 Although the Vikings’ time in East Anglia was relatively brief, they made many contributions to the area’s culture. Their legacies include contributions to language, laws, place names, churches – and even England’s own saint.

East Anglia had a special relationship with the Vikings. They attacked this region many times and settled here in large numbers. For generations they ruled it as part of the Danelaw in a separate kingdom, and long after it became part of a united England their influence continued to be felt. In some ways, that influence still remains.

Viking attacks on East Anglia came in three phases. The first started in 867, when armies overthrew kingdoms, set up local princes and concentrated on plunder and tribute. The focus in the first few years was the usual Viking interest in gold, silver and slaves. From 876 was added land, in order to settle. In the 10th century, from the 990s, a third wave came under Svein Forkbeard and his son Canute, who aimed to secure the throne of England itself.

In northern Britain and Ireland, the Vikings seem to have come from Norway, but in eastern England they are always called Danes. Although many did come from Denmark, the soldiers in their armies may have come from other parts of Scandinavia and even parts of England. In this period, Scandinavians together spoke Old Norse, so it is difficult to separate them.

In 864-5 a Viking army wintered at Thetford in Norfolk. From there they started a campaign of conquest and plunder across England. One by one each Anglo-Saxon kingdom was destroyed – Northumbria in the north, Mercia in the Midlands, East Anglia in Norfolk and Suffolk – until only Wessex in the southwest was left. 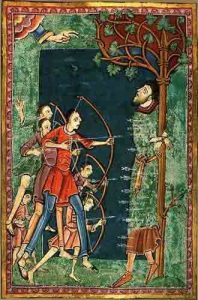 A medieval illumination depicting the death of Edmund the Martyr on 20 November 869 by the Vikings. / Wikimedia Commons

Edmund was the King of East Anglia (the counties of Norfolk and Suffolk). After attempts to make peace with the Danes and their leader Ivar the Boneless, he met them in battle at Hoxne in Suffolk, in 869/70.

In this year the host rode across Mercia into East Anglia, and took winter-quarters at Thetford; and the same winter king Edmund fought against them, and the Danes won the victory, and they slew the king and overran the entire kingdom. (Anglo-Saxon Chronicle)

He was captured, whipped, shot full of arrows and then had his head cut off. His followers, looking for the head, heard a cry of “Here, here” and found it nestled between the paws of a wolf. He soon became a saint – in fact, the Danes venerated him after their conversion to Christianity, and Canute turned his shrine into an abbey. It gave its name to Bury St. Edmund’s and was one of the most powerful abbeys in the country. Edmund himself became patron saint of England until he was replaced by St. George in the 14th century.

The following years were to have a terrible effect on the East Anglian church. Monasteries were a favourite target across Europe since they had great concentrations of wealth. St. Etheldreda’s monastery at Ely was sacked in 870, and the site may have been abandoned for a hundred years. Dummuc and Elmham, the two bishoprics, lay unoccupied well into the 10th century. It was not until the reign of Edgar the Peaceful (959-975) that Benedictine monks colonised the Fens and the Church recovered. 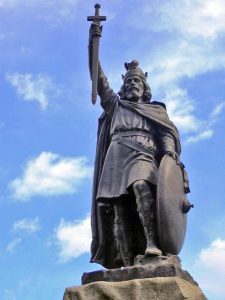 Statue of Alfred the Great by Hamo Thornycroft in Winchester, unveiled during the millenary commemoration of Alfred’s death. / Photo by Odejea, Wikimedia Commons

Alfred was a younger son of the house of Wessex, the kingdom of southwest England, and campaigned against the Danes even before he became king. His most famous victories came after the Danes surprised him in 876 at Chippenham (Berkshire) as he was celebrating Christmas. He was forced to retreat to the Isle of Athelney in the Somerset marshes. Gathering his forces he was eventually powerful enough to meet Guthrum at Edington, where the Danes were defeated.

And afterwards at Easter, King Alfred with a small force made a stronghold at Athelney, and he and the section of the people of Somerset which was nearest to it proceeded to fight from that stronghold against the enemy. Then in the seventh week after Easter he rode to “Egbert’s stone” east of Selwood and there came to meet him all the people of Somerset and of Wilshire and of that part of Hampshire which was on this side of the sea, and they rejoiced to see him. And then after one night he went from that encampment to Iley, and after another night to Edington, and there fought against the whole army and put it to flight, and pursued it as far as the fortress, and stayed there a fortnight. (Anglo-Saxon Chronicle)

Guthrum, according to the Anglo-Saxon Chronicle, “in this year [880] the army went from Cirencester into East Anglia and settled there and shared out the land”. At the Treaty of Wedmore in 886 Guthrum agreed to convert to Christianity (taking a new name, Athelstan) and a boundary separating his kingdom from Alfred’s was established. This was from the river Lea in Essex up to Bedford, then along the Ouse Valley. In the treaty this kingdom was called “Eastenglum” – East Anglia – but later it would be known as the Danelaw. It was around this time the Danes began settling in numbers.

How many were there?

Traditionally it was believed East Anglia received thousands of Danes at this time, both elites and peasant farmers. But the region was already densely settled and some have argued that only a ruling elite settled. Evidence in the debate includes:

Whatever the number, eastern England developed an Anglo-Scandinavian society with a mixed identity that continued even after Wessex conquered the Danelaw. The “Law of the Danes” still operated; the two different languages were mutually intelligible; and intermarriage would have helped bring the communities together. Because paganism was abandoned so quickly, the church was able to accept the new rulers, but church organisation in East Anglia was in tatters until the later 9th century. Bishoprics needed to be recreated and a number of important monasteries, such as Ely, were not refounded until well after the Danelaw ceased its independence. 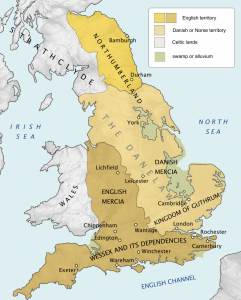 Guthrum never ruled all of the Danelaw, only most of East Anglia and part of the Midlands; in the north, a kingdom developed around York (Viking Jorvik) that was both more centralised and longer-lasting than Guthrum’s realm. Not much is known about rulership after the end of Guthrum’s reign in 890. But it seems there were a number of burhs (fortified towns), including Cambridge, Norwich and Thetford. Each burh had its own Danish army (here) that formed the main decision-making body. It is from around this time that evidence comes for Viking fortifications, either rounded or D-shaped, and consisting of a ditch and embankment. In Cambridge, the Danes moved the town from north of the river to its south, and may have built the King’s Ditch (along Pembroke and Downing Street) as one arm of the D. Norwich was also enclosed in a D-shaped fortification. Evidence for Danish influence on the plan of Norwich comes from the roads with -gate endings, such as Colegate (from “gata” or street). Either from this period, or under Canute, come churches dedicated to St. Clement (the patron saint of sailors), often located next to river crossings or at points where a main street runs through Viking fortifications.

From the early 900s Edward the Elder and his sister Aethelflead (the Lady of the Mercians) began a programme of reconquest, and in East Anglia one by one the heres submitted. Cambridge, ruled by Early Sihtric from a base in Great Shelford, submitted in 917. After this, Anglo-Scandinavian society developed within a united English kingdom. It appears that each Danish here submitted at each town:

And Earl Thurferth and the holds submitted to him, and so did all the army which belonged to Northampton, as far north as the Welland, and sought to have him as their lord and protector. …And the army which belonged to Cambridge chose him especially as its lord and protector, and established it with oaths just as he decreed it. (Anglo-Saxon Chronicle) 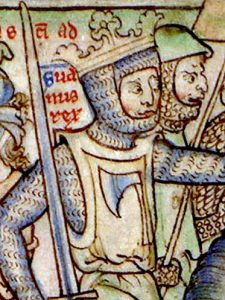 Another wave of Danish settlement is connected to the attempts of Svein Forkbeard of Denmark and his son Canute (Knutr) to take the English throne. This began in 991 when Svein landed in Essex and met Ealdorman Brhytnoth at the Battle of Maldon in 991. Maldon was one of the worst defeats ever suffered in Anglo-Saxon history and was commemorated in one of the great poems of English literature. From this time dates the Danegeld an attempt by England to pay off Viking marauders so that they would go home; thousands of pounds of English coins were transferred to Scandinavia as a result. 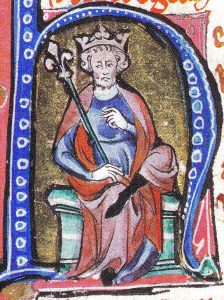 A 14th-century portrait of Cnut the Great / Wikimedia Commons

This led to King Ethelred the Unready’s command that on St. Brice’s Day, 1002, Danes throughout his kingdom were to be put to the sword. Among the victims were Svein’s sister and her husband, and it led to further attacks from Denmark. These campaigns culminated in England’s acceptance of Svein as king in 1014, but it was to be Canute who took the throne in 1016. His Danish army occupied a number of East Anglian towns -including Norwich, Thetford and Cambridge – but his rule was benign and his sponsorship of religious houses benefited both Ely and Bury St. Edmunds. He ruled until 1035, which is the end of the Viking age in East Anglia; and soon after, in 1066, the Norman Conquest ended Anglo-Saxon England, too.

What was the Vikings’ legacy?

The Vikings were close enough culturally to the Anglo-Saxons that they were able to integrate quickly. It is difficult to distinguish a genetic contribution, although many East Anglians must have Viking ancestry. But they probably gave an extra stimulus to processes that might have happened anyway. They may be important in the growth of towns – for instance, in repositioning Cambridge and helping in the growth of other centres. Thetford grew to be 75 hectares in size and by the end of the period was smaller than Norwich. Both by the time of the Norman Conquest were two of the largest cities in England and perhaps this is due to trade. The Vikings have a reputation as merchants and it is known Danish traders resided in a number of towns, though regional and local exchange seems to have been more important than international. Most importantly, they helped in the unification of England and in the creation of the English people.