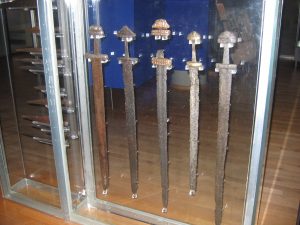 Historians have used written accounts and archaeological records to determine that Vikings fought – on foot and on horseback – with swords, shields, spears and axes. Historians also think the Vikings wore defensive armour and helmets (without horns), but archaeological proof has been harder to find.

The weapons used by the invading Scandinavians during King Alfred’s reign differed very little from those being used by the Anglo-Saxons in the same period. Both groups also used extremely similar tactics and techniques, with little to separate the prowess of the military might they could bring. 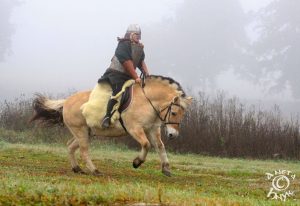 Warfare for each group was primarily fought on foot. Horses were certainly used by soldiers. The Anglo-Saxon Chronicle reports that members of the Viking Great Army would steal horses in order to more effectively raid the surrounding country after leaving their ships. However, if a battle were to take place, then men would usually dismount in order to form a shield wall, which was a preferred tactic of both the Anglo-Saxons and the Scandinavians. This was a tight formation where the shield of each man overlapped with his neighbours’, making a more solid wall which was more of a challenge to penetrate for the enemy. Looser formations would also be used for smaller skirmishes, but for larger battles the shield wall seems like the primary tactic. 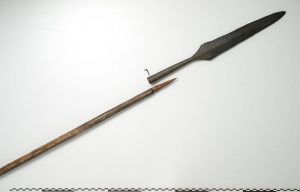 The Viking spear from the Lendbreen Ice Patch

By far the most common weapon used by the Scandinavians and the Anglo-Saxons alike was the spear. Spears in the Viking Age were typically between 7′ (213 cm) and 11′ (335 cm) in overall length, with the blade length of the spearhead being as short as 3″ (7.6 cm) for lighter javelins, and up to sizes of 18″ (46 cm) for thrusting spears. This leaves room for a lot of variation, which would largely depend on personal taste and, of course, expense. Part of the reason for the popularity of the spear was the relative low cost due to a low metal content, but it also afforded the user greater range and therefore the ability to stay further away from the enemy. Typically spears were used in one hand, with the other being used for the shield, but the longest of spears would have required two hands to use with any accuracy. The shaft of the spear was usually made from ash, because of the strength and flexibility of the wood, while remaining relatively lightweight. 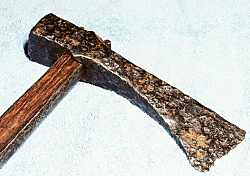 Axes were also very common in the Viking Age. Although the Vikings are stereotypically viewed as carrying large, two-handed axes, there is no evidence for these being used in Scandinavia or England before the 11th century. The typical axe used during the reign of King Alfred was a single-handed weapon, with a single-edged iron cutting edge. This again was a very common weapon throughout all strata of society because every household would have at least one axe as a general household tool, and thus they were widely available and did not use much high-quality metal. Axes were extremely versatile weapons, able to be swung with enough force to cut deep, or to break bones if armour was worn. However, they were just as useful when being hooked over an opponent’s shield, making it possible to pull the shield away in order to let an ally incapacitate them more easily.

The weapon which always receives the most attention is the sword. This is perfectly understandable because they are the most highly decorated and impressively crafted of all Viking Age weapons, and they were regarded as indicators of social status in England and Scandinavia alike. Their form changed little after the fall of the Roman Empire, being broad, double-edged swords averaging nearly 3 feet (91 cm) in length, although some single-edged blades are known from Norway in particular. These swords were designed for use in one hand, and used in slashing motions, most commonly downwards from a raised position. Their weight let them do large amounts of damage, although some weapons do seem to suggest that only the part of the blade nearest the tip was highly sharpened. This meant that the crushing ability of the weight of the blade was recognized, and that swords were intended for use against armoured men as well as unarmoured. 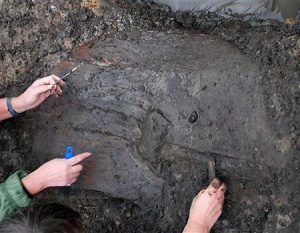 In terms of defensive equipment, the most common item was the shield. For a man to go into battle without a shield would be extremely rare because they were relatively cheap and easy to make. They were constructed from planks of wood, usually lime-wood or ash with a diameter of up to 3 feet (91 cm), with a metal boss in the centre over the handgrip. The shield was therefore held in one hand, allowing large amounts of manoeuvrability. The edge, which was most commonly covered in leather, stitched to the board of the shield, could be used offensively for extremely strong punches, allowing the shield to be both offensive and defensive. The surface of the shield was usually faced with material, or painted, or both. This strengthened the surface against attacks, and disguised the direction of the planks, which prevented an opponent from exploiting that knowledge and splitting the shield more quickly.

Items of armour are known but are far less common than shields. If leather armour was used, it has not survived, although it is commonly postulated that it would have been relatively common. The metal armour which has survived is all chainmail, and in the 9th century mail shirts were typically only knee length, with the sleeves not reaching beyond the elbow. The meshes of iron were nearly impossible to cut through, but had to be worn with padding underneath to counteract impacts on the flexible shirt and prevent breakage of bones. Because of the sheer amount of metal and craftsmanship involved, mail shirts were very uncommon, and only rich warriors would have been able to afford them. 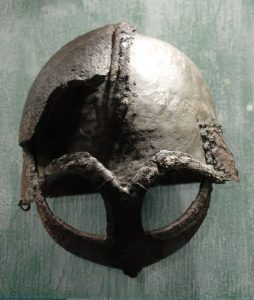 Helmets are even more rare in archaeological finds, with less than 10 being known from Europe throughout the entire Viking Age, and only one of these was found in Scandinavia – and unlike the common stereotype, not horned. All helmets would have had smooth, domed or conical surfaces in order to reflect blows more efficiently, while horns would have only increased the risk to the wearer. Manuscript illustrations suggest that helmets were fairly common, and it could be the case that many were re-used and never made it into the archaeological record. But they could simply have been very rare items.