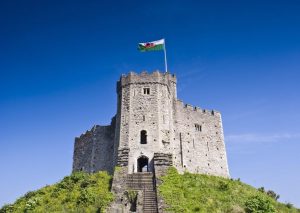 At one point, the Welsh, Cornish, Scottish, Bretons and northern English were all “Kymry” – so what changed? 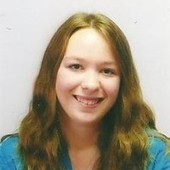 By Rebecca Thomas / 10.06.2017
PhD Candidate in Anglo-Saxon and Nordic History
University of Cambridge

Britain in the early Middle Ages was very different to the country it is now. Rather than England, Scotland and Wales, the island consisted of numerous kingdoms, the fate and fortune of which fluctuated, as some kings gained lordship over others, some smaller kingdoms were swallowed by their larger neighbours and others fell to foreign invaders – including Vikings, in the ninth and tenth centuries.

Today, many of the inhabitants of Britain identify primarily as Scottish, English or Welsh. But this was not always the case. In Wales, for example, there is no single defining moment when one can say the people became “Welsh”.

In the early middle ages, Wales was divided into different kingdoms – Gwynedd, Dyfed and Ceredigion, for example – whose relations with each other formed a central plank of native politics. 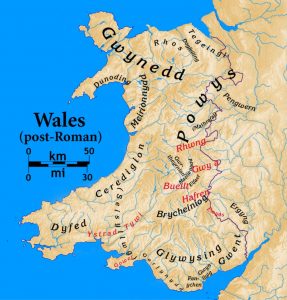 In the ninth and tenth centuries the Merfynion, a dynasty named after its founder Merfyn Frych, gained power in many of these areas, their authority spreading over both north and south Wales.

Even though we now label the medieval country as Wales, back then it didn’t exist as a politically united entity. This raises the question – did the inhabitants of Wales view themselves as “Welsh”?

What’s in a name?

The words “Wales” and “Welsh” come from the Anglo-Saxon use of the term “wealas” to describe (among other things) the people of Britain who spoke Brittonic – a Celtic language used throughout Britain which later developed into Welsh, Cornish, Breton and other languages. English writers viewed the inhabitants of Wales as different to themselves, but at the same time “wealas” wasn’t exclusively used to refer to the people of Wales. The same terminology was sometimes applied to the Cornish, for example, with “wealas” reflected in the last part of Cornwall, as “wall”.

We see a similar situation when we look at Welsh language words. In the tenth century, “Kymry” was used for the first time in Armes Prydein Vawr (The Great Prophecy of Britain), a Welsh poem calling upon the Kymry to rise up against the English and evict them from Britain once and for all.

To explain the connection between the Brittonic-speaking peoples at the time, early medieval writers turned to history. The Historia Brittonum, a history of the Britons composed in north Wales in 829–30, claims that the Britons were originally Trojans who travelled to Britain and became the first people to settle the island. The text also asserts that during the Roman period a group of Britons left the island and settled on the continent, becoming the Armorican Britons or Bretons of Brittany, northern France.

Ideas of identity were – and still are – complex and layered. The poet who wrote Armes Prydein Vawr may have viewed all the Brittonic-speaking peoples as Kymry, but the Cornishmen are also referred to as “Cornyw” and the inhabitants of Strathclyde as “Cludwys”. There was a distinction between the inhabitants of Cornwall and of Strathclyde, even though they were grouped as Kymry. 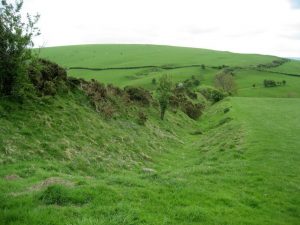 There is a similar sentiment in the Life of King Alfred, a biography of Alfred the Great composed in 893. The writer, Asser, refers to Offa of Mercia building a dyke – an earthwork denoting the border – between his kingdom and Britannia. Here Britannia clearly refers to Wales and presents it as distinct from other Brittonic-speaking areas. Likewise, Cornwall is called “Cornubia” rather than as part of one unified Britannia.

Nowhere is the complex nature of identity more evident than in early medieval Wales. Sources both from and outside what we would now view as Wales see the Welsh as Britons, who once ruled the entirety of Britain, and – according to Armes Prydein Vawr – would do so again in the future. But there are hints of an alternative identity being constructed. When Asser looks to Britannia, his gaze is turned to the west, across Offa’s Dyke. It is possible that the geographical unit of Wales, is beginning to play a role in ideas of identity.

We can’t point to exactly when the inhabitants of Wales became Welsh, but the works of writers and historians of the time provide tantalising glimpses of shifting and developing identities in the early medieval period.