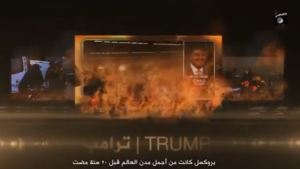 Donald Trump once again found himself front-and-center on an ISIS propaganda video, but it wasn’t because his tough talk had them scared. Instead, they used his quotes to drum up support for their narrative that Americans hate Islam and encouraged Muslims around the world to rise up to defeat the United States and Donald Trump. As a recruitment tool, Donald Trump is becoming better than any promise of paradise after death.

It’s easy to see why. In the aftermath of the sickening terrorist attack at several locations in Belgium, Trump opted to opportunistically exploit the tragedy for political reasons rather than express sympathy. On Twitter, he fired off several messages victim-blaming Belgium for being too tolerant of Muslims.

He and fellow Republican candidate Ted Cruz proceeded to take turns trying to out-xenophobe each other with calls to persecute Muslim Americans, including Trump suggesting many Muslims in the United States were secretly protecting ISIS. (He has previously stated that protesters at his rallies may be working for ISIS, too, validating the spurious idea that ISIS is working within the United States to undermine the country.)

Needless to say, this Muslim-bashing is exactly the sort of reaction ISIS – the real ISIS – is looking for. In the wake of the Brussels attacks, terrorism experts warned that Trump’s unhinged response would be exploited by the terror group to justify their attacks on the West. Malcolm Nance, a Navy intelligence agent, put it even more plainly on MSNBC: “Good God, they’re probably cutting videos of this right now.”

Nance was viciously attacked by Trump’s supporters for his “overblown” comments – and he was completely right.

In an ISIS video spreading like wildfire around Jihadist internet groups, Trump is featured heavily. They even play an audio clip of Trump saying ISIS has left Brussels an “absolute horror show.”

Sadly, this isn’t even the first time Trump has been used as an unwitting propaganda tool for terrorists. For all of his boasting about how he can defeat ISIS, the group absolutely loves using him as a symbol of everything corrupt with America. It’s so easy. As Gawker’s Sam Biddle recently wrote:

You couldn’t create a better mascot for anti-West radicalism from scratch if you tried. Trump is the best imaginable caricature of decadent, stupid Western values and mores—and now that he’s jumped headlong into Islamophobia, echoing the exact “clash of civilizations” West-versus-Islam philosophy that ISIS subscribes to, he makes for a pitch-perfect recruitment tool. A famous, wealthy, grotesque American man who wants to bomb the Middle East and subjugate Muslims, and who loudly proclaims any and all adherents of Islam are unwelcome in the United States, is simply a gift to ISIS and its sympathizers.

What terrorism experts and the Obama administration have repeatedly pointed out, but Republicans have failed to understand, is that matching hate for hate doesn’t work. It is exactly the sort of thing ISIS, and other religious death cults, want to hear. They already believe they are waging war with the “infidels” of the West, so it’s people like Trump who give them the evidence they need to follow through with it.

ISIS is begging America to elect Donald Trump – that should say it all.