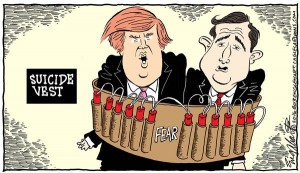 Every terrorist attack threatens to put Donald Trump one step closer to the White House.

Fear is a potent political weapon — especially at times like this, with Brussels in the news — and Trump is a master at going for the gut. If more attacks occur in the West between now and election day, he may be well positioned to exploit that fear. He doesn’t know much of anything about policy — this is hideously clear by now (on Monday, he even suggested that we scale down America’s commitment to NATO). But he instinctively understands the visceral power of simplistic language.

Trump and Hillary Clinton are still the likeliest fall contenders, and here’s what the Republican front-runner is currently saying about potential general election opponent: “She’s weak on anything having to do with strength.”

Yes, it’s simplistic. It’s the kind of line that’s written with a crayon. But there’s a method to his madness. He’s working to own the word strong and equate her with the word weak.

He’s been doing this for months, like when he blitzed the Sunday TV shows in early January and said, “I think that my words represent toughness and strength. Hillary’s not strong. Hillary’s weak.” Which mirrors what he’s saying now: “We have to be tough. We can’t be soft and weak.”

Maybe you think this is just a crock, that Trump’s primal scream and gift for repetition can’t possibly prevail, even if autumn swing voters are quaking their boots about terrorism. Maybe you scoff at the notion that swing voters would listen to Trump when he says Clinton is “weak on borders.” (As he did this week.) Maybe you find it funny that Trump has been aspiring to own the strong word since at least 1990 – when he told Playboy magazine that if he were president, he “would believe very strongly in extreme military strength.”

But academics who have studied the impact of terrorism on public opinion – they’re not laughing.

New research points to the fact that in times of fear, voters become more supportive of candidates who supports positions such as hostility to perceived outsiders, tightened borders and fewer foreign entanglements. In other words, Donald Trump.

“All of these issues are, in fact, pillars of the aggressive response we have seen by Donald Trump in response to the news today,” Elizabeth J. Zechmeister, a political science professor at Vanderbilt University, told Politico. She is the co-author, along with University of California Riverside professor Jennifer L. Merolla, of the book “Democracy at Risk: How Terrorist Threats Affect the Public.”‘

Merolla told Politico their research showed frightened voters do not necessarily look for traditional leadership qualities, such as Clinton’s long tenure in government. She added that female politicians “are typically at a disadvantage” when terrorism is a dominant issue.

It’s quite possible that Trump’s baggage will ultimately defeat him, that fear of his ascent will trump his attempts to exploit fear of terrorism. Distaste for the guy still runs high, even in Republican circles. After Trump threatened to smear Ted Cruz’s wife (don’t ask), former George W. Bush speechwriter Michael Gerson posted this appeal to his GOP brethren: “How could anyone, anyone, support this vile man….If Trump were somehow, God forbid, to be elected president, he would immediately defile the office, and surely abuse it.”

Fine. But never underestimate the power of fear as a voting motivation – especially in a climate like ours. History has taught us, all too often, what can happen when the basest instincts of human nature lead people astray.

I’m reminded of something that Bill Clinton said in December 2002, during a speech I covered in New York. He framed it as a warning to his fellow Democrats: “If we look weak at a time when people are scared, we lose. Insecure people would rather have someone who is strong and wrong.”