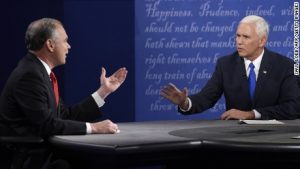 FARMVILLE, Va. — The first and only vice presidential debate was mostly about the candidates who weren’t there. Mike Pence kept his focus on Hillary Clinton’s trustworthiness, and Tim Kaine revisited every one of Donald Trump’s unscripted and controversial remarks.

Pence, the governor of Indiana, had the bigger challenge in defending Trump, who had one of the worst weeks of his candidacy after he seemed unprepared at the first presidential debate last week. Pence called some of Kaine’s attacks “nonsense,” and swatted away his more clearly canned lines, including two that referenced Trump’s reality TV show. But Pence deflected and diverted the conversation as Kaine challenged him on his unwillingness to defend Trump.

Kaine, a Virginia senator, needed to help hold the ground that Democratic contender Hillary Clinton reclaimed in the polls after the first debate. He often interrupted Pence and repeated a list of Trump’s characterizations of women, Latinos and African-Americans. He also mocked Trump’s admiration for Russia’s leader, Vladimir Putin.

Pence sought to assure voters there is a steady hand at the helm and that Clinton’s record as the secretary of state may have made the country more unsafe.

Here are six takeaways from their debate at Longwood University in southern Virginia on Tuesday:

—WHERE ARE THE TAX RETURNS?

Pence sought to turn the controversy over Trump’s refusal to release his tax returns — and a report that Trump had filed a nearly $1 billion loss in 1995 that would have allowed him to avoid paying any federal income tax for nearly two decades — into an attack aimed at portraying Clinton and Kaine as tax and spend liberals.

“All we heard is more taxes, $2 trillion in more spending,” Pence said as the moderator asked him whether Trump should release his tax returns, as Pence did in September. “Honestly, Senator, you can roll out the numbers and the sunny side, but I’ve got to tell you the people in Scranton know better the answer to this economy is not more taxes.”

Pressed by the moderator, Pence argued that Trump was a “businessman, not a politician” and had used a provision in the tax code to keep his business afloat.

“How do you know that? We don’t know his taxes,” Kaine shot back, arguing that Trump once promised in 2014 that he would release his returns when he ran for the presidency.

—WHOSE CAMPAIGN IS UGLIER?

Clinton was seen as getting under Trump’s skin at the first presidential debate by recalling Trump’s remarks about women as “dogs” and “pigs.” Kaine and Pence traded barbs over whose campaign had started the invective.

Pence accused Clinton of conducting an “insult-driven campaign,” adding that if Trump had “said all the things you said he did, he still wouldn’t have a fraction of insults” that Clinton had leveled when she accused half of Trump’s supporters of being in a “basket of deplorables.”

But Kaine noted that Clinton had apologized for the remarks and Trump had never apologized to President Barack Obama for questioning his birthplace or to Sen. John McCain, R-Ariz., for saying he preferred war heroes who hadn’t been captured.

And Kaine made it personal, noting that Trump had questioned the impartiality of a federal judge in Indiana because of his Mexican heritage.

“Your judge, a Hoosier judge,” Kaine said, looking at Pence. “I can’t imagine how you could defend that.”

Pence batted away Kaine’s prepared zingers about Trump’s reality television show “The Apprentice,” including Kaine’s questioning of whether voters wanted “a ‘you’re hired’ president in Hillary Clinton … or a ‘you’re fired’ president in Donald Trump?”

Later, he told Pence, “You are Donald Trump’s apprentice.”

Pence snapped back: “I appreciated the ‘you’re hired,’ ‘you’re fired’ thing, Senator. You use that a whole lot.”

Kaine persistently tried to raise Trump’s remarks on immigration, including when Trump in June 2015 accused Mexico of sending “rapists” and other criminals to the U.S.

Pence took offense at one of Kaine’s points. “Senator, you whipped out that Mexican thing again,” he said.

—WHEN FAITH BECOMES AN ISSUE

Both spoke about their faith and how it has imbued their lives. Kaine said he had struggled, as governor, with the death penalty but carried out executions as required by Virginia law, despite his personal opposition rooted in his Roman Catholic faith.

“I try to practice my religion and follow the teachings in my personal life,” said Kaine, who didn’t mention politics or offer any partisan attacks.

Pence had no such inhibitions. He talked about his youth at “church on Sunday morning, grace before dinner. I’ve tried to live that over every day of my life since. … What I can’t understand is, with Hillary Clinton and now Sen. Kaine at her side, to support a practice of partial birth abortion.”

Pence, who calls himself a born-again evangelical Catholic, said the idea of taking the life of a child was “just anathema to me.”

Kaine noted how Trump has said that if abortion ever becomes illegal, women who still sought them should be subject to “some form of punishment.”

“Why doesn’t Donald Trump trust women to make this choice for themselves?” Kaine said.

“Because a society is judged by how it deals with the most vulnerable,” Pence replied.

—ON POLICE AND RACE

Pence gave an impassioned defense of police officers and his running mate’s call for increased “law and order” as the two tangled over how to handle rising tensions over the deaths of black men at the hands of police officers.

“Let’s not have the reflex of assuming the worst of men and women in law enforcement,” Pence said. “Law enforcement in this country is a force for good.”

Kaine countered that “people shouldn’t be afraid to bring up bias in law enforcement.”

Pence defended Trump’s support for the controversial policing tactic known as stop-and-frisk, but Kaine warned it would be a “big mistake” that could worse racial polarization.

—AND WHAT ABOUT RUSSIA?

They also clashed over Trump’s praise of Russian President Putin, with Pence calling Putin a “small and bullying leader” — unlike Trump, who has been largely complimentary of Putin’s strong leadership.

Pence tried to back off a statement he’d made in September that Putin was a “stronger leader” than Obama, but Kaine insisted he had said it.

Kaine used the exchange to again criticize Trump for not releasing his tax returns, saying Americans deserve to know whether Trump has any business in Russia.

“If you don’t know the difference between dictatorship and leadership, then you’ve got to go back to a fifth-grade civics class,” Kaine said of Trump’s position on Putin.

—TAKE ME TO YOUR LEADER

Who actually looks and acts like a president has been a topic this campaign, and Pence and Kaine — who would serve under either the oldest person to ever become president — Donald Trump is 70 — or the second oldest — Clinton is about to turn 69 — found some common ground with their records.

Asked about their leadership abilities in case either man had to step into the Oval Office, Kaine ticked off his resume: missionary, civil rights lawyer, mayor of Richmond, governor and senator from Virginia. He said he would “relish” the role of being Clinton’s “right-hand man,” adding that she’d told him, “I think you will help me figure out how to govern this nation so the success of this administration is the difference we make in people’s lives.”

Pence, who served in Congress and is now his state’s chief executive, talked about his growing up in small-town Indiana “with a cornfield in my backyard.” If the responsibilities of the presidency ever fell to him, “I would meet that moment with that lifetime of experience.”