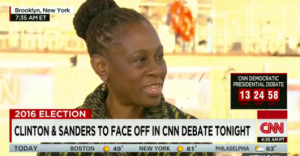 I think that Bernie’s getting a little desperate, so I expect that we’ll hear the volume pumped up a little bit.

She said this prior to the debate, following a massive gathering of nearly 30,000 people at a rally for the “desperate” Bernie Sanders.

Desperate – let’s look at the word in different contexts.

Desperate is using one’s primary super PAC, in Hillary’s case (because Bernie doesn’t have one), Priorities USA Action, to spend over $4 million in South Carolina trying to make sure to hold on to her “firewall” against a Bernie surge.

Desperate is taking political advantage of the Sandy Hook tragedy to use it against one’s opponent and literally blame him for guns flowing into New York, by proxy repulsively implying he was somehow at fault for such tragedies.

Desperate is using all of the issues one’s opponent has fought tirelessly for his entire life (instead of having to slowly come around like Clinton) – health care, civil rights….try hard, I’m sure you and Sec. Clinton can remember.

Desperate is attempting to use one’s gender as some advantage and literally reference a statement from Donald Trump to use against Sen. Sanders – SANDERS, who has a long and proven record of supporting and voting for legislation supporting a woman’s right to choose.

Desperate is losing eight out of nine primaries and caucuses and suddenly finding yourself staring at a repeat of 2008.

Desperate is relying on supporters such as you, Ms. McCray, in Bernie’s home state (yes, Bernie’s, not Clinton’s) to use against him the adjective that most decidedly more aptly describes Secretary Clinton.

Desperate is relying on superdelegates to ignore the will of the people in their respective states because “they know better”.

Desperate is playing “No True Scotsman” by questioning Sanders’ support for the Democratic Party, especially when Clinton’s affiliation is more appropriately neo-Republican.

Desperate is seeing a groundswell of grassroots fundraising and support for one’s opponent.

But there is another desperation that Clinton has ignored for some time, Ms. McCray, that you seem to be avoiding as well.

Desperate is wanting the freedom to marry who you love regardless of gender.  Clinton finally came around to supporting that when it was politically expedient to do so.  Bernie has supported it for a very, very long time – publicly.

Desperate is wanting to have the same opportunities as everyone else but being prevented from it by the top 1% of this country who doesn’t want to share in that opportunity – not in the wealth, in the opportunity.

Desperate is not wanting to see your child sent off to fight and possibly die in an unnecessary and unjustified war based on lies – a war Clinton voted for and Sen. Sanders did not.

Desperate is not wanting to see jobs flee the country under trade deals that disadvantage them – such as the TPP Clinton supported and now magically don’t (maybe).

Desperate is having family members who have been killed by gun violence and prior to 2008 watching Clinton have problems with national gun registration, only now switching to being the biggest gun control advocate out there apparently.

Desperate is being the child of immigrants who came here illegally to find a better life, obey the law, and hopefully find a path to legalization, while in 2003 Clinton was among those supporting deportation and splitting those families apart.  Again, Clinton changed her tune – Sanders’ voice has been consistent in contrast.

So, Ms. McCray, understand the difference these different types of desperation.

The desperation you describe is what has driven Clinton to flip-flop time and again over the years to sustain a political career that has turned into an amazing source of revenue for her – especially on Wall Street.

The desperation Burroughs described is what drives support for Sanders, the only candidate on either side who has always fought for the drastic change people so desperately want.