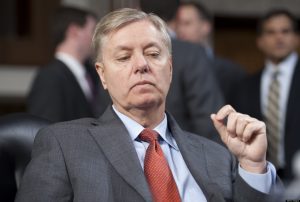 Lindsey Graham has been one of the biggest Republican voices against GOP nominee Donald Trump, and he only grew louder as Trump gained more support. The South Carolina senator has had a hard time of it, too – he has called on Trump to apologize for several offensive things he’s said, then he supported Trump briefly before aggressively crusading to get the Republican party to un-endorse Trump, and then he revealed that he himself would not be endorsing the humiliating candidate.

Graham has been a nervous wreck over having to watch Trump destroy his beloved GOP right before his very eyes. But earlier today, Graham seemed to have finally accepted defeat and the fact that the Republican party he has known and loved will never be the same again. In an interview with At This Hour’s Kate Bolduan and John Berman on CNN, Graham sorrowfully said:

“I’ve come to the point now where I can’t go where he is taking the party or the country.”

Graham also expressed that he was worried about what Trump’s intentions were for America, but showed a brilliant amount of ignorance as he expressed he was open to the idea that Trump might grow as a politician (not happening). And to prove what a mess Trump’s campaign really is, Graham brought up a talking point of Trump’s, only be told by the hosts that it was actually an idea that came from Mike Pence, Trump’s VP pick.

You can watch Graham accept his circumstances below, and you can tell that it’s absolutely killing him.

Sen. Lindsey Graham on Trump: “I can’t go where he is taking the party” https://t.co/6OZtrfIwimhttps://t.co/FgCRZeO6Er

Graham seems absolutely destroyed by a GOP under Trump, but we all know that conservatives have created this nightmare for themselves. They created a hateful, bigotry-filled political climate that allowed someone like Trump to excel, and they failed to stop him.