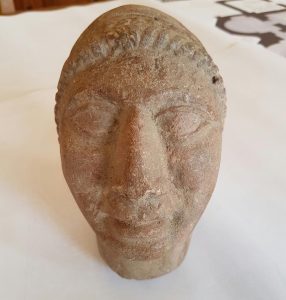 The alleged Apollo head sculpture is dated back to the 6th century BC. Photo: National Museum of History

A head from an ancient stone sculpture believed to depict Ancient Greek, Thracian, and Roman god Apollo wearing a wreath has been turned in Bulgaria’s National Museum of History in Sofia.

The Museum has released photos of the alleged Apollo head providing very little details about how it was discovered, and “donated” to it.

It only reveals that the donor would like to remain anonymous, and that he discovered the stone statue fragment by accident in a potato field near the southern Bulgarian city of Stara Zagora, the modern-day successor of the Ancient Roman city of Augusta Traiana and the medieval city of Vereia.

Learn more about the Augusta Traiana – Vereia Archaeological Preserve in the Background Infonotes below!

The Museum also mentions that “the donation was made with the assistance of the Main Directorate of the Interior Ministry”, without making clear whether the person who discovered the head was involved in any unlawful actions.

“The head bears the characteristics of Antiquity sculptures and is dated back to the 6th century BC, i.e. it is at least 2,600 years old,” the institution informs in its release.

It adds that the alleged Apollo head sculpture is well preserved, and is to be included in the exhibitions of Museum after “some cleaning-up”.

This is not the first time that the National Museum of History in Sofia has issued releases with scant details announcing archaeological artifacts had ended up in its possession after having been discovered by accident and “donated” to it, or after having been seized from treasure hunters by the police.

For example, in August 2016, the Museum announced a Late Antiquity amphora still containing palm oil had been discovered by a diver off the coast of Bulgaria’s Black Sea resort of Sozopol, and in 2015, in three separate instances, it received a marble bust of Roman Emperor Gordian III, an Ancient Roman sacrificial altar dedicated to Jupiter Dolichenus, and an Ancient Roman gravestone and a five seal of Tsars of the First Bulgarian Empire (632/680-1018) – all said to have been seized from treasure hunters or antique traffickers. 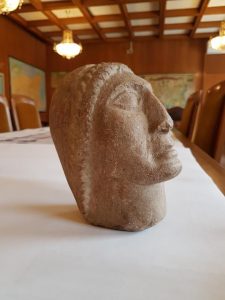 The stone head of Apollo wearing a wreath is said to have been found by accident in a “potato field” near Bulgaria’s Stara Zagora. Photo: National Museum of History

The Augusta Traiana – Vereia Archaeological Preserve in Bulgaria’s Stara Zagora features the ruins of the Ancient Roman city of Ulpia Augusta Traiana founded by Roman Emperor Trajan (r. 98-117 AD) (after whom it was named) on the site of a previously existing Ancient Thracian settlement called Beroe. (Some recent research indicates it might have been founded by Trajan’s successor, Emperor Hadrian (r. 117-138 AD).)

It saw its greatest urban development later under Roman Emperor Marcus Aurelius (r. 161-180 AD). It quickly became the second most important city in the Roman province of Thrace after Philipopolis (Trimontium), today’s Plovdiv.

In the 2nd-3rd century, Augusta Traiana minted its own coins (a total of 874 of them have been found, as of 2016); it is known to have had commercial contacts with faraway regions and cities such as Sparta, Aquincum (today’s Budapest in Hungary), and the province of Syria.

In the middle of the 4th century, Augusta Traiana became one of the major Early Christian centers in the Balkans.

In the Late Antiquity (4th-6th century) the city of Augusta Traiana was once again known under its original Thracian name of Beroe. Much of it was destroyed by barbarian invasions – by the Goths in the 4th century, the Huns in the 5th century, and later by the Avars, Slavs, and Bulgars. The invasions of the Bulgars and Slavs in the late 7th century, around the time of the two peoples formed the First Bulgarian Empire (680-1018 AD), effectively ended the life of the Ancient Thracian and Roman city of Beroe / Augustra Traiana as it was.

It became part of Bulgaria under Khan Tervel (r. 700-718 AD), who called it Boruy. The city was a major bone of contention during the numerous wars between Bulgaria and Byzantium and became known as Vereia after Byzantium conquered the eastern parts of the First Bulgarian Empire in the late 10th century. Bulgaria reconquered it during the early years of the Second Bulgarian Empire (1185-1396 AD).

In addition to its Neolithic, Ancient Roman, Byzantine, and medieval Bulgarian heritage, the territory of the city of Stara Zagora is dotted with Ancient Thracian archaeological sites, including more than 30 known temples of the main god according to Thracian mythology, the Thracian Horseman.