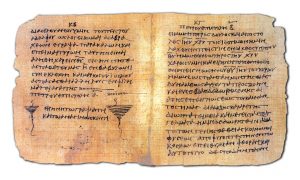 What did books look like in antiquity? In this article, Cillian O’Hogan tells how ancient books were made, and traces the process by which the bookroll was replaced by the codex.


In Ancient Greece, books did not take the form known to us today, but rather were in the shape of rolls made out of papyrus. The papyrus plant grows widely in Egypt, and the material itself is made by cutting the stem of the plant in half and laying it crosshatch over itself, like a weave, before hammering it together. Papyrus sheets were formed in a range of sizes. Width was closely related to quality: rolls containing wider sheets tended to be more expensive than those containing narrower sheets. Bookrolls could then be extended by the addition of extra sheets if necessary.

The nature of our evidence means that we have far more primary evidence about books from Graeco-Roman Egypt, where papyrus survives well thanks to the climate. We do have some papyrus fragments from elsewhere in the Graeco-Roman world, and some other writing materials survive from antiquity, notably the Vindolanda Tablets, found at Hadrian’s Wall and now in the British Museum, and the writing-tablets found during recent excavations in London, and now at the Museum of London. But we should always bear in mind that our first-hand evidence for ancient books is heavily shaped by what books looked like in Egypt in particular, and this may not be reflective of other parts of the ancient world.

Bookrolls could take a number of shapes and sizes, but studies have indicated that the normal size was about 20 sheets long. An average rolled-up bookroll was probably around the same size as a wine bottle. The amount of text they could contain varied, but an individual bookroll could hold at least one book of Homer’s Iliad, i.e. around 700 lines of poetry. The text would be written on bookrolls horizontally, a column at a time – in the case of verse, these columns corresponded to the length of individual lines, while in the case of prose, the length could vary widely, but narrow columns tended to predominate.

The Aristotelian Constitution of the Athenians is preserved almost intact on four papyrus scrolls, copied around 100 CE (Papyrus 131) / British Library

A text was initially copied on one side of the bookroll only. Usually this side enabled the words be written ‘along the fibres’. Writing on the other side, ‘across the fibres’, meant that as the roll was continually unrolled and rolled up, cracks would begin to appear in the ink and it would become more difficult to read. However, papyrus was expensive, and even in Egypt, where it was widely available, many bookrolls were reused to house new texts. This is found on bookrolls of all qualities, including beautifully-written high-end volumes. To be re-used, a bookroll would be unrolled and inverted, so the text on the verso would be upside down relative to the text on the recto. This practice helps us to tell, when we have a fragment of a papyrus with unidentified texts on it, whether the papyrus came from a bookroll or a codex.

How the codex itself came into widespread use is unclear. Wax and wooden tablets are known from references as early as the Homeric poems, in which Bellerophon is given a ‘folded tablet’ (πἰναξ πτυκτὀς, Iliad 6.168) to deliver to the king of Lycia (the tablet contains a note that the king is to execute the messenger). It has long been believed that these tablets were the impetus behind the development of the codex form. Yet tablets tended to be used as notebooks, which could be re-used, rather than for recording literary works, as bookrolls were.

Moreover, the inherently brittle nature of papyrus meant that it was unsuitable to being folded in half, an essential part of constricting a codex. Parchment is far more suitable to the codex form. It is noteworthy that probably the earliest example of an ancient literary text clearly in codex form is a Latin text written on parchment around the turn of the 2nd century CE (Papyrus 745). It is not necessarily the case, then, that wooden tablets, which were used for temporary and ephemeral recordings, would have informed the development of the parchment/papyrus codex. Some have, in fact, suggested, that the codex developed separately, initially as a parchment format, elsewhere in the ancient world (i.e. not in Egypt), and that the papyrus codex in Egypt appeared later, perhaps some time in the 2nd century CE, having been influenced by parchment codices. An example of a papyrus codex from this era is the Gospel of John papyrus, two fragments of which are now held at the British Library. One of the fragments is a bifolium (i.e. a sheet folded in half to form two folios), and the holes where the sheet was sewn into a codex form can still be seen in the centre of the fragment. 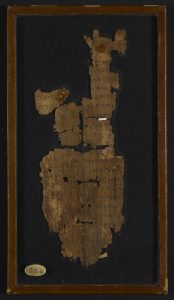 Sewing holes, used to join this bifolium to the other leaves in this Gospel of John codex, can still be seen down the centre of this fragment (Papyrus 782/2484) / British Library

In Egypt, the codex was slow to gain popularity, and bookrolls continue to outnumber codices until the 4th century. One remarkable statistical factor is that Christian texts are almost exclusively written on codices, in stark contrast to classical Greek texts. There appears to have been a marked preference on the part of Christians for the codex form.

Parchment, which refers to any animal skin that has been treated and stiffened, is perhaps the most robust and useful writing support ever developed by humans. It also provided the particular advantage of enabling much larger codices than could be developed on papyrus, which was limited in size. The 4th century sees two massive Greek Bible manuscripts come into existence, Codex Sinaiticus and Codex Vaticanus at the Vatican. Both of these originally contained the entire Bible, both Old and New Testament, a scale of book that could not have been possible in a single volume made of papyrus. While the remarkable size of these manuscripts is unusual, and most late antique and medieval parchment manuscripts are of a more manageable size, their appearance is an emphatic statement of the triumph of parchment and the codex form. 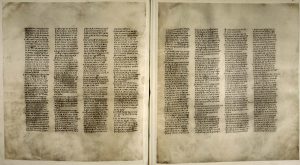 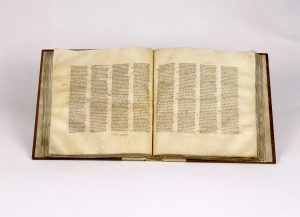 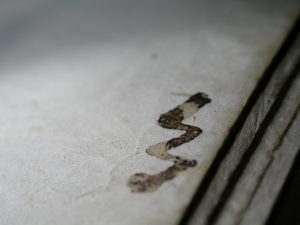 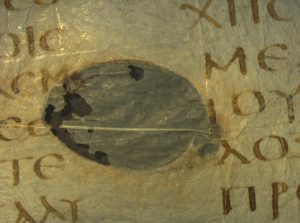 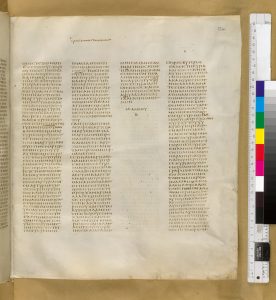 The codex form also enabled speedier referencing. Although it is not until the rise of printing that we find standard pagination in books, it was still far easier to navigate to and find a specific passage in a codex than in a bookroll. This may help to explain why the codex was popular amongst Christians, and why medical and legal texts appear to have been among the earliest texts to be found in codex form.