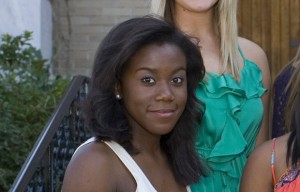 In this Oct. 5, 2012 photo, Jaelyn Young, an honor student at Warren Central High School, poses for a photo in Vicksburg, Miss. Young and another Mississippi resident were arrested on Saturday, Aug. 8, 2015, on charges that they were trying to travel abroad to join the Islamic State militant group. / Photo AP

The couple intended to marry in Turkey first.  Dakhlalla was born in Bethlehem, Mississippi, and Young is from New Jersey.  Both Young and Dkhlalla were taken into custody by the FBI at the airport in Columbus, Mississippi, before boarding a flight bound for Istanbul.

Court papers reveal that both Young and Dakhlalla left farewell letters “that explained they would never be back, with Young acknowledging her role as the planner of the expedition and that Dakhlalla was going as her companion of his own free will.”

According to The Clarion-Ledger, “The couple appeared before U.S. Magistrate Judge S. Allan Alexander of the Northern District of Mississippi Tuesday morning for preliminary and detention hearings, according to the DOJ. Young and Dakhlalla were denied bond and remanded to the custody of the U.S. Marshal Service.”