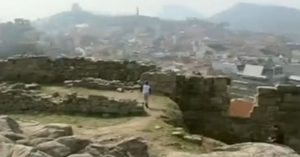 Previously unknown part of a fortress wall from the Roman Era and numerous fragments of plaster which are even older are the latest archaeological discoveries from the 2016 excavations of Nebet Tepe, the prehistoric, ancient, and medieval settlement and fortress, to which the city of Plovdiv owes the title of “Europe’s oldest city“.

Bulgaria’s Plovdiv has seven historic hills, not unlike Rome. They are still known as “tepeta”, i.e. by their Turkish names from the Ottoman period.

Out of all of them, Nebet Tepe has the earliest traces of civilized life dating back to the 6th millennium BC, which makes Plovdiv 8,000 years old, and allegedly the oldest city in Europe (and the world’s six oldest city, according to a Daily Telegraph ranking).

Around 1200 BC, the prehistoric settlement on Nebet Tepe was transformed into the Ancient Thracian city of Eumolpia, also known as Pulpudeva, inhabited by the powerful Ancient Thracian tribe Bessi.

Later, in the Antiquity period, the city was known as Philipopolis (named after King Philip II of Macedon), and Trimontium (after its conquest by the Roman Empire).

Learn more about the history of Plovdiv and Nebet Tebe in the Background Infonotes below.

The newly discovered Roman fortress wall section is over 1.7 meters wide, and is attached to a fortress wall from an earlier period, lead archaeologist Sofiya Hristova from the Plovdiv Museum of Archaeology has announced, speaking at a news conference of the Museum and Plovdiv Municipality, as cited by Radio Focus Plovdiv.

The archaeological excavations on Nebet Tepe were conducted in the fall of 2016, and the numerous newly unearthed structured were conserved in December.

Part of a less preserved fortress wall from the Byzantine period has also been dug up near Nebet Tepe’s water cistern.

Hristova has pointed out that the more ancient archaeological layers have been damaged in later periods on the Nebet Tepe Hill.

For example, a medieval necropolis from the 14th century, i.e. the time of the Second Bulgarian Empire, was damaged during the Ottoman period (14th/15th – 19th century), including the period of Bulgaria’s National Revival (18th-19th century).

Thus, the archaeologists have found only a total of six graves left from the medieval necropolis.

Another of the most interesting latest discoveries is a collapsed roof and brick walls from the 2nd-1st century BC, i.e. the Late Hellenistic period of Ancient Thrace, with a large amount of preserved wall plaster fragments in different colors. These finds have been reached at a depth of 4 meters below the present day level.

“This has led us to hypothesize that this may have been a large monumental building from this early period when the fortress walls were built,” Hristova is quoted as saying. 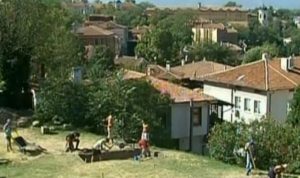 Another view of the fall 2016 excavations in the Nebet Tepe Fortress, with Plovdiv’s Old Town with its 19th century Bulgarian architecture visible in the background. Photo: TV grab from BNT2-Plovdiv

Speaking at the same news conference, Assoc. Prof. Kostadin Kisyov, Director of the Plovdiv Museum of Archaeology, has pointed out that many of the authentic archaeological structures in the Nebet Tepe Fortress were buried during excavations in the 1970s but could be unearthed and exhibited in situ.

The Museum team has proposed to Plovdiv Municipality to expose and display all fortress walls and other surviving structures inside the ancient and medieval fortress.

“We would like to reach the main rock [underneath the fortress]. This way we will be able to showcase fortress walls which are 5-6 meters tall as well as all ancient authentic pathways leading up to this spot. We will be able to unearth everything with minimum funding,” Kisyov says, as quoted by local news site PodTepeto.

He has also argued that once such potential large-scale excavations are completed, the site of the Nebet Tepe Fortress should be fenced off, and admission tickets should be required to visit it. Presently, the spot is freely accessible to tourists, and there have been numerous cases of vandalism.

Kisyov has also emphasized that the latest archaeological probes have found no evidence of the presumed existence of a large medieval fortress tower or keep on Nebet Tepe.

In the spring of 2015, a restoration project for Plovdiv’s ancient and medieval fortress authored by architect Yuliy Farkov caused public outrage, with one of its main provisions being the erection, i.e. “restoration”, of a 14-meter-tall keep, without any hard evidence that it had ever existed in the first place.

“There is no data indicating there had been a 14-meter-tall tower since we have found neither the foundations of such a structure, not any other evidence for its potential existence. Our probe near the water cistern proves that,” Kisyov says, expressing relief that the highly controversial project, which may have become one of Bulgaria’s notorious “botched restorations“, has never been realized. 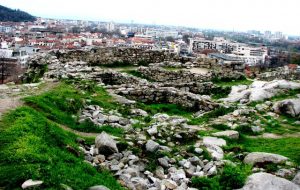 A view of the ruins of the Nebet Tepe Fortress before the recent excavations. Photo: PodTepeto

It has been noted before that much of the Nebet Tepe fortifications were buried with rubble during the previous archaeological excavations of the respective section back in 1974, and were not documented back then.

The archaeological exploration of the Nebet Tepe Fortress, technically the site of Europe’s earliest city, began with the first proper digs carried out in the 1920s by archaeologist Dimitar Tsonchev when the existence of Ancient Thracian layers was established.

Further excavations, which were led by archaeologist Petar Detev in 1960, used probes to discover more finds from the Bronze Age and the Iron Age, and by archaeologist Lilyana Botusharova shortly afterwards. Detev confirmed the stratigraphy of four archaeological layers in 1969.

Large-scale excavations (of which no paperwork has been preserved) were carried out in 1974 by archaeologist Atanas Peykov. In 1994, a clay altar was discovered close to the top of the Nebet Tepe Hill.

The history of the southern Bulgarian city of Plovdiv – often dubbed the oldest city in Europe – began with the human settlement on the ancient hill of Nebet Tepe (“tepe” is the Turkishword for “hill”), one of the seven historic hills where Plovdiv was founded and developed in prehistoric and ancient times.

During the Early Antiquity period Eumolpia / Pulpudeva grew to encompass the two nearby hills (Dzhambaz Tepe and Taxim Tepe known together with Nebet Tepe as “The Three Hills”) as well, with the oldest settlement on Nebet Tepe becoming the citadel of the city acropolis.

In 342 BC, the Thracian city of Eumolpia / Pulpudeva was conquered by King Philip II of Macedon renaming the city to Philippopolis. Philippopolis developed further as a major urban center during the Hellenistic period after the collapse of Alexander the Great’s Empire.

In the 1st century AD, more precisely in 46 AD, Ancient Thrace was annexed by the Roman Empire making Philippopolis the major city in the Ancient Roman province of Thrace. This is the period when the city expanded further into the plain around The Three Hills which is why it was also known as Trimontium (“the three hills”).

Today the prehistoric, ancient, and medieval settlement on Nebet Tepe has been recognized as the Nebet Tepe Archaeological Preserve. Some of the unique archaeological finds from Nebet Tepe include an ancient secret tunnel which, according to legends, was used by Apostle Paul (even though it has been dated to the reign of Byzantine Emperor Justinian I the Great (r. 527-565 AD)) and large scale water storage reservoirs used during sieges, one of them with an impressive volume of 300,000 liters. Still preserved today are parts of the western fortress wall with a rectangular tower from the Antiquity period.