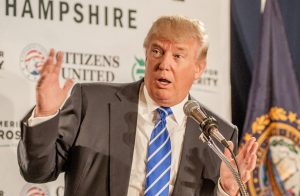 Even before he has lost the election, Donald Trump is courting danger. Not for himself, but for America and for democracy. His statements that if he loses the election, it is because it was rigged and stolen by the Democrats and the liberal media have heightened the anger of his supporters. And Mike Pence, his VP candidate has gone along with Trump’s false assertions. At one of the Trump-Pence rallies, there were calls for a revolution if Hillary wins. America has never faced this kind of militant reaction from a major presidential candidate and his supporters in modern times. They refuse to accept the facts that the majority of voters do not appear to want Trump as their president.

And Trump is happy to stoke the anger of his supporters. His ranting and raving against “crooked Hillary” and his threats to throw her in jail if he is elected have energized his backers who believe this is a real possibility. The focus on Hillary’s private email server and her speeches to financial companies have tamped down the damage that Trump did to himself when the tapes were released showing him to be a sexual predator. And the Trump base has been willing to overlook or forgive his comments, accepting his excuse that it was just locker room talk. The fact that a number of women have reported Trump’s attacks on them have been dismissed as lies by Trump and believed as such by his supporters. To many of his backers, Trump can do no wrong and Hillary is characterized as the devil.

It is amazing that so many of his supporters see the election in blacks and whites, with Trump as the white knight riding in to save the country. His failure to pay taxes for years and his unwillingness to release his tax returns don’t bother his base. His failures as a businessman with his series of bankruptcies and screwing his investors, his contractors, and the small businesses that worked for him are passed off by his backers as media propaganda by liberal journalists who are out to get Trump. His supporters are unwilling to investigate the attacks on Trump for themselves, perhaps afraid they will discover that the denunciations of him are based on facts, and that Trump is truly a liar, manipulator, sexual predator, lousy businessman, and a fraudulent blowhard; a narcissistic autocrat who is a danger to American democracy.

America has a long history of conspiracy theories and political paranoia, rife in the 20th century. These included the John Birchers, Joe McCarthy and his anti-Communist witch hunts, the John Kennedy assassination and the refusal to believe it was done by Lee Harvey Oswald alone, the moon landing that some believe was faked, the supposed extra-terrestrials in Roswell, New Mexico, and so forth. Of course, they biggest one in the 21st century was the refusal by many to believe that Obama was born in America, was a Christian and not a Muslim. In fact, many Republicans still adhere to these beliefs, particularly the Trump supporters. So it is not surprising that his base is willing to believe that the election could be rigged and stolen from him. Over 40 percent of voters believe the election could indeed be fraudulent and fixed by Hillary and her “liberal” cohort.”

For years, Republican state legislatures have passed strict voter ID laws, claiming that it was necessary to prevent voter fraud. This is in spite of the fact that multiple studies have shown that voter fraud is virtually non-existent. In reality, these laws were passed to reduce minority voting with the GOP trying to make it harder for minorities to register. But with the idea of voter fraud already inculcated in the minds of Republicans, it was not a big step for the Trump backers to think that the entire election could be stolen. Of course, a central conspiracy to fix an American election would be impossible with the states and localities controlling the voting process.

According to Politico, Republican leaders are now trying to get Trump to stop claiming that the election will be rigged and stolen from him. They say unless he can show some proof, he should refrain from his assertions, as they could lead to more disrespect for the government, flouting of the laws, and even some violent reactions if Trump loses the election, which now seems likely. Will there be a rebellion in some areas of the country led by white supremacists. We’ll have to wait and see. But the anger Trump is stoking is certainly dangerous and a new low in American politics.

Trump doesn’t want to be branded “a loser” and will do anything he can to avoid being called that. He doesn’t care whether he might damage the nation and American democracy, ruining the image of America globally. For Trump, everything is done for Trump with no consideration of the repercussions.