A matryoshka doll with the face of US President-elect Donald Trump surrounded by other matryoshkas is displayed on the table of the street souvenir vendor in the Andriyivskyy Descent in downtown Kiev, Ukraine, 10 November 2016. Americans on 08 November chose Republican candidate Donald Trump as the 45th President of the United States of America, to serve from 2017 through 2020.  EPA/Roman PIlipey

The spread of fascism in the 1920s was significantly aided by the fact that liberals and mainstream conservatives failed to take it seriously. Instead, they accommodated and normalised it.

The centre right is doing the same today. Brexit, Trump and the far right ascendant across Europe indicate that talk of a right-wing revolutionary moment is not exaggerated. And the French presidential election could be next on the calendar.

The shock felt by status-quo liberals and the anguish experienced on the left are matched only by the satisfaction of those on the extreme right that finally they are winning. The so-called “mature” liberal democracies have long managed to marginalise them. They have long seen themselves as vilified for speaking the common man’s unpalatable truths to out-of-touch elites. Now their champions are taking the political mainstream by storm. 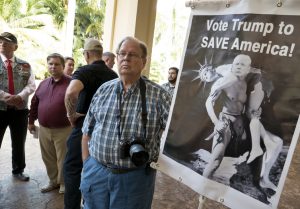 The signs are there if you look for them. EPA

And amid the disbelief, heartbreak, and protest, centre-right politicians and commentators seek to normalise and reassure. They dismiss “whingers” and “moaners”. They tell us to “get over it” and brush off talk of a new fascism as unfounded scaremongering.

Even among historians, apparently – as the conservative British writer Niall Ferguson condescended to tell Greek economist Yanis Varoufakis – analogies with the 1930s are made only by the easily confused.

The circumstances of society, the economy and geopolitics are so different, we are told, that today’s right-wing populism cannot be called a fascistic revival. The mainstream centre right assures us that all will be well in the wake of Trump’s election. It did the same after the UK’s EU referendum, even as hate crime figures skyrocketed. Conservative politicians continue to insist that the real news is about the wonderful opportunities ahead.

But that is precisely where the real analogy with Europe in the 1920s and 1930s lies. The circumstances of 2016 are indeed very different to those against which militarised party shock troops fought street battles, and monarchists looked for a strong man to capture popular grievances and save them from Bolshevik revolution.

But historical circumstances, like individuals, are always unique and unrepeatable. The point of comparison is not to suggest that we are living though the 1930s redux. It is to recognise the very strong family resemblance in ideas shared by the early 20th century far right and its mimics today. 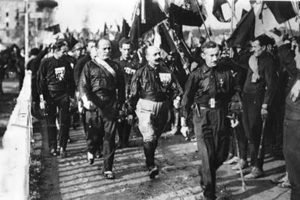 Discussion of fascism suffers from an excess of definition. That often, ironically, allows far-right groups and their apologists to disavow the label because of some tick-box characteristic which they can be said to lack. But just as we can usefully talk about socialism as a recognisable political tradition without assuming that all socialisms since the 1840s have been cut from one mould, so we can speak of a recognisably fascist style of politics in Europe, the US, Russia and elsewhere. It is united by its espousal of a set of core ideas.

The theatrical machismo, the man or woman “of the people” image, and the deliberately provocative, demagogic sloganeering that impatiently sweeps aside rational, evidence-based argument and the rule-bound negotiation of different perspectives – the substance of democracy, in other words – is only the outward form that this style of politics takes.

More important are its characteristic memes. Fascism brings a masculinist, xenophobic nationalism that claims to “put the people first” while turning them against one another. That is complemented by anti-cosmopolitanism and anti-intellectualism. It denounces global capitalism, blaming ordinary people’s woes on an alien “plutocracy” in a language that is both implicitly anti-Semitic and explicitly anti-immigrant, while offering no real alternative economics. In the US, that was perfectly exemplified in Trump’s closing campaign ad.

Trump’s view of the world.

A view of the world is presented that is centred on fears of “national suicide” and civilisational decline, in which whites are demographically overwhelmed by “inferior” peoples, minorities and immigrants. Today, this is the French far-right’s paranoid fantasy of le grand remplacement. Geopolitics are defined by latent religio-racial war. In the 1930s, this meant a death struggle with communism. Today, it looks to, and feeds abundantly on, Islamist extremism and Islamic State, abusively identified with “Islam” as a whole.

This is a new fascism, or at least near-fascism, and the centre right is dangerously underestimating its potential, exactly as it did 80 years ago. Then, it was conservative anti-communists who believed they could tame and control the extremist fringe. Now, it is mainstream conservatives, facing little electoral challenge from a left in disarray. They fear the drift of their own voters to more muscular, anti-immigrant demagogues on the right. They accordingly espouse the right’s priorities and accommodate its hate speech. They reassure everyone that they have things under control even as the post-Cold War neoliberal order, like the war-damaged bourgeois golden age last century, sinks under them.

The risk, at least for the West, is not a new world war, but merely a poisoned public life, a democracy reduced to the tyranny of tiny majorities who find emotional satisfaction in a violent, resentful rhetoric while their narrowly-elected leaders strip away their rights and persecute their neighbours. That might be quite bad enough.