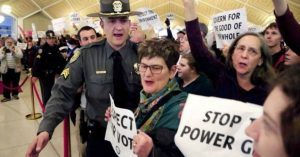 “The avalanche of anti-voter surprise bills introduced yesterday by the extremist leadership of the North Carolina General Assembly in a constitutionally suspect ‘extra session’ is an insult to the democratic values held by all people of goodwill in this state.”

Refusing to accept Republican lawmakers’ brazen power grab, hundreds of North Carolinians flooded the halls of the General Assembly building in Raleigh Thursday evening to shame the officials as they passed a series of measures aimed at stripping power from Governor-elect Roy Cooper.

Twenty people, including one journalist, were reportedly arrested for disrupting the special session, during which the GOP-led legislature passed a number of bills that would limit the ability of the incoming Democratic administration to make appointments and control elections.

According to the Charlotte Observer:

On Thursday evening, some protesters began to laugh when senators characterized one of the proposed bills as designed to end partisanship, said Lori Bennear, 44, of Raleigh.

“Then people booed,” she said, “and they got a second warning. So people started making hand gestures instead. Some people hissed, and the (Senate) said the hissing and the hand gestures were disrupting the business of the Senate.”

A similar move followed in the House. Protesters then filled the upper floor of the rotunda, chanting “Whose House? Our House!”

Afterwards, a crowd of roughly 300 gathered outside the chamber, cheering as police officers led away those who had refused to vacate the gallery. “A chant of ‘All political power belongs to the people’ rang out uninterrupted for about 15 minutes,” the Observer noted.

Rev. William Barber II, president of the state chapter of the NAACP and leader of the Moral Monday movement, issued a statement Friday condemning the legislative action.

“The avalanche of anti-voter surprise bills introduced yesterday by the extremist leadership of the North Carolina General Assembly in a constitutionally suspect ‘extra session’ is an insult to the democratic values held by all people of goodwill in this state,” Barber said. The session had been convened under the auspices of passing relief funding for victims of recent flooding and wildfires.

“It is immoral, it is unconstitutional, and this illegal session is a direct attack on the people of North Carolina,” he added.

There are more protests planned for Friday as the General Assembly will hold final votes on the most controversial bills before they land on the desk of outgoing Republican Governor Pat McCrory.

One bill that passed the House on Thursday “calls for making Cooper’s Cabinet appointments subject to approval by the state Senate and drastically cutting the number of state employees the governor can hire and fire,” the News & Observer reported. Meanwhile, “[t]he Senate approved a bill that would evenly split election boards between the political parties rather than keep them under control of the governor’s party.”

“These changes represent deep violations of the Democratic process,” Barber continued, “and the faith that voters place in the elected process. To these legislators, who were elected under racially discriminatory redistricting plans, we say that this madness must end now and the people’s vote must be respected.”

These bills corrode fundamental principles of separation of powers. The bills introduced for consideration attack public education and the environment, rig democratic institutions, and attempt to control future elections with no public comment, no notice, and no attempt for bipartisan considerations that would include the voice of African Americans and other people of color and our chosen representatives.

For his part Cooper, currently the state attorney general, has said, “They will see me in court.”

Videos of Thursday’s stirring demonstrations were posted online. As for Friday, the General Assembly is reportedly attempting to wrap up by 1pm “to miss the largest crowd,” according to the NC NAACP, which is asking demonstrators to come early. Updates are being shared with the hashtags #RespectOurVote, #NCGA, #NCpol, and #StoptheCarolinaCoup.

This is what democracy looks like #ncpol #ncga #protectourvote pic.twitter.com/8tyubtDvvX