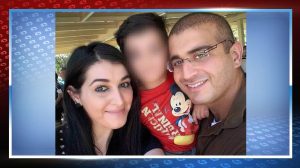 Omar and Noor Mateen with Son

The Orlando gunman’s wife has told federal agents she tried to talk her husband out of carrying out the attack, NBC News has learned.

Omar Mateen’s wife, Noor Zahi Salman, told the FBI she was with him when he bought ammunition and a holster, several officials familiar with the case said. She told the FBI that she once drove him to the gay nightclub, Pulse, because he wanted to scope it out.

Mateen opened fire at Pulse early Sunday, leaving 49 dead and 53 injured. Twenty-seven victims remained hospitalized Tuesday. Six were in critical condition, according to hospital officials who said the death toll was still at risk of rising because one or two of those patients were “profoundly ill.”

Authorities are considering filing criminal charges against Noor for failing to tell them what she knew before the brutal attack, law enforcement officials say, but no decision has been made.